The Federal Reserve is warning that the U.S. economy is headed for a "fiscal cliff" because the Bush tax cuts will expire soon.  More specifically, the Congressional Budget Office (CBO) estimated that returning to the Clinton-era tax rates would cause a two-quarter recession in 2013 and reduce the nation's GDP by nearly four percentage points for the year.

Meanwhile, politicians are using the issue for personal gain.  Like an actor taking a third bow after his audience has stopped applauding, former president Clinton went back on stage, proclaiming that the 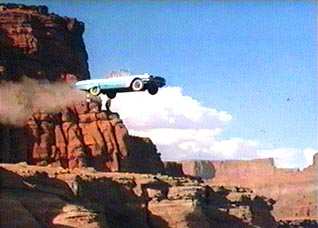 Bush tax cuts must be extended.  An Obama spokesman responded, "We should not extend and he will not extend the ... Bush-era tax cuts for the wealthiest two percent of the American people."  For once, congressional Republicans agreed with Mr. Clinton -- until Mr. Obama persuaded Clinton to retract his recommendation and parrot the president instead.

Along with the spinning and class-envy pandering, the debate seems to be coalescing into two camps, and both require legislation between now and year-end.  Although the CBO says the scheduled tax hikes and spending cuts might reduce the budget deficit by $560B next year (PDF page 4), neither camp wants to let that happen because it almost certainly will cause another economic recession.

Page six of the CBO report shows that, after a mild recession, the U.S. economy under current law would grow next year by about 0.5 percent.  It also shows that, without the "fiscal restraint," the economy would grow by a healthy 4.4 percent.  That would put GDP at almost $16T, so the fiscal restraint would cause an economic hit of about $624B ($16T x 3.9%).  In other words, the fiscal restraint would make federal government bureaucrats and politicians better off by $560B next year, and make everyone else worse off by $624B.

But the CBO fiscal restraint covers more than just the Bush tax cut expiration.  It also includes expiration of the Obama payroll tax cut, an ObamaCare tax hike, some mandatory spending cuts, expiration of unemployment compensation extensions, an ObamaCare reduction in Medicare compensation for doctors, and some unspecified coincidental tax hikes.  Reverting back to the Clinton-era tax rates would account for only about $264B of the $560B ($221B income tax hike, plus $65B of other tax hikes, minus $22B due to "economic feedback," using CBO ratios).

Therefore, if the Republican camp (formerly the Clinton camp, too) simply passes legislation to extend the Bush tax cuts, the CBO probably would score that as having only about half the effect of eliminating all of the tax hikes and spending cuts.  That's because 53 percent (296B) of the $560B still would occur.  Likewise, 2013 GDP still might be reduced by about $330B ($624B x 0.53).

The chart below summarizes the results of following the current path, versus the two alternatives.  All three paths would cause a GDP hit, but only the middle (Republican) path probably would not cause another recession, so its "2013 GDP Impact" box is shown in yellow, rather than red. 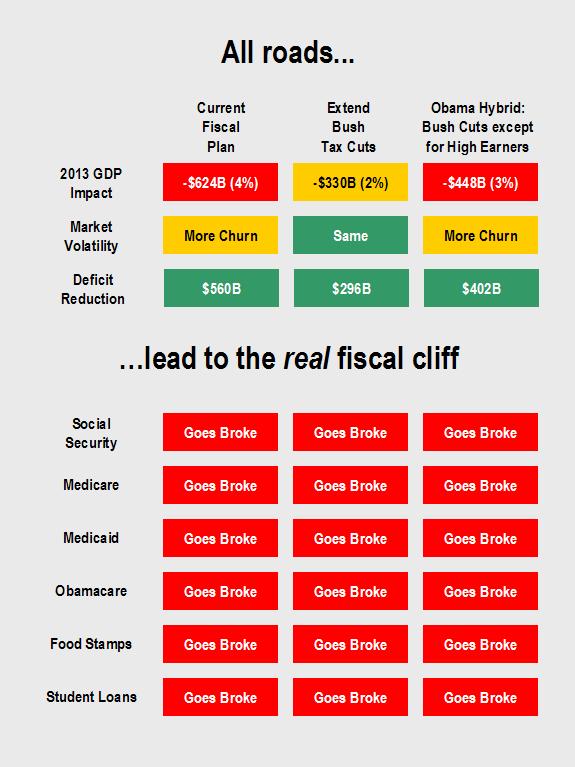 The chart also mentions the harmful effect of Mr. Obama's tax hikes on the securities market volatility.  By raising the top-bracket dividend tax rate from 15 percent to 39.6 percent, the president's changes will cause high earners to dump dividend stocks and replace them with capital appreciation stocks.

Because the top two percent of taxpayers own a large portion of all publicly traded securities, the cost of capital for dividend paying firms will rise.  For instance, today, Johnson & Johnson pays about 3.9 percent of its share price in dividends.  To retain its high-income investors, J&J would have to raise its dividend to 5.9 percent, just to maintain the same 3.3 percent after-tax yield.  That would cost the firm another $3.5B annually, and it earned only about $10B last year.  But of course, J&J will not raise its dividend by much, if any, so its share price will fall to partially compensate for the lower after-tax yield.  That would harm all investors, not just the "rich" whom Mr. Obama vilifies for political gain.

Rotating into capital appreciation stocks also has adverse tax implications under the president's plan, though only about half as severe.  So the tax hike would increase the cost of capital for growth companies as well, making them less productive, too.

Note that high earners will take other evasive action beyond just churning their securities portfolios.  For instance, if one of Mr. Obama's movie star pals currently deducts $1M for mortgage interest on her Bel-Air mansion, she could avoid losing that deduction under the president's new tax rules simply by borrowing against her Houston office building, then paying off her mansion mortgage to avoid the additional $400K in federal taxes.  She still can deduct the interest expense on her commercial property.

Likewise, executives might ask to be compensated with more stock options and less salary, which also might reduce their tax hike.  And there's always the John Edwards tax dodge of forming a partnership or corporation to avoid Medicare taxes and the new Obamacare taxes.  By increasing the spread between corporate and personal income tax rates, the president will provide even more incentive to incorporate.

Furthermore, if you believe Mr. Obama's former economic adviser, Christina Romer, 2014 will be even worse.  While the CBO predicts that the economy would recover from a tax hike during the second half of 2013, Romer's published research shows that GDP will fall for ten quarters (PDF page 782).  In other words, not only will Mr. Obama's deficit reduction probably be less than $402B per year, but his damage to the U.S. economy is likely to be well over $448B in 2014 and beyond.  Again, that might be a good deal for bureaucrats and politicians, but it harms society overall.

And if all this political maneuvering doesn't seem pointless enough already, look at the bottom half of the chart to see the long-term implications of the three tax alternatives.  The politicians are squabbling about billions while spending trillions and committing taxpayers to tens of trillions in unfunded entitlement liabilities.  As the chart says, all three roads lead to the real fiscal cliff.

Both sides blather on about the deficit, but debt is just a symptom.  The fatal disease is massive government spending.  Raising taxes merely tries to mask the symptom while the disease spreads.  It makes little difference whether the government taxes $3.8T out of the economy with a balanced budget or borrows $3.8T out of the economy with irresponsible deficit spending.  Either way, $3.8T is shifted from the productive private sector to the less productive government sector, with huge parasitic losses.

The key to long-term growth and prosperity is to invest the nation's wealth in projects that yield the best return.  On average, private-sector investments yield about 5-10 percent annually, depending on the amount of risk involved.  On average, government projects yield far less.

Studies show that government is about half as productive as the private sector.  For instance, Washington, D.C. spends over $28,000 per pupil on its public schools, while private schools do a better job for less than half that.  The Davis-Bacon Act and state prevailing-wage laws guarantee that all government infrastructure projects will cost much more than equivalent private-sector projects.  On average, federal government compensation is more than twice that of private-sector workers, so the poor productivity of the public school system likely extends to most government projects.

Using those metrics, a trillion-dollar private-sector investment would appreciate to $1.05-1.10T after a year, a five- or ten-percent profit.  In stark contrast, the same investment by government would depreciate to half that, or about $0.55T, a 45-percent loss.  In other words, the stimulatory "multiplier" is in the private sector, and government spending merely destroys wealth.  Granted, some government, such as national defense and court system spending, is a necessary evil, but all of it still is fiscally evil.

During the vaunted Clinton years, the average federal spending was 19.8 percent of GDP.  Returning to that level would require a budget cut of more than half a trillion dollars, to $3.2T next year.  Yes, politicians on both sides protest that such drastic cuts are not feasible because entitlement liabilities are growing faster than the economy.  But that's precisely the point: until those entitlements are reformed, the current squabbles are virtually irrelevant.

Meanwhile, what should the congressional Republicans do between now and November?  I suggest that they pass a bill that makes the Bush tax cuts retroactive to January 1, 2013, regardless of when the bill makes it through the Senate and Oval Office.  The Democrat-controlled Senate will refuse to bring the House version to the floor for a vote, so the Republicans can hold firm and promise to pass the bill in January if voters give them control of the Senate and the presidency.

Otherwise, as shown on the chart, voting for Democrats is equivalent to voting for another recession.  That's a pretty big price to pay to get revenge against high earners, whose only sin is that they someday might give you a rewarding job.