Warning: mysqli_free_result() expects parameter 1 to be mysqli_result, bool given in /var/www/html/americanthinker/admin/common/functions/func.general.php on line 126
 Firefighters and Racism - American Thinker
|

In June of 2009, Judge Nicholas G. Garaufis of the Federal District Court in Brooklyn ruled that two firefighting written examinations administered in 1999 and 2002 "unfairly excluded hundreds of qualified people of color from the opportunity to serve as New York City firefighters."  This ruling was a result of a 2007 lawsuit by the Justice Department after a federal complaint by the Vulcan Society, an association of black firefighters.

Then, on March 8, 2012, Judge Garaufis ordered New York City to pay $128 million to those firefighters who alleged that the city used the entrance exam to deliberately keep African-Americans and Latino Americans off the force.  The "judge also ordered the FDNY to hire 293 black and Latino applicants."

Intrigued, I decided to investigate the controversial firefighting examinations.  Firefighter Examination No. 7029 and Firefighter Examination No. 2043 are available online.  In the first ten questions of Exam #7029, the examinee is asked to refer to a Memory booklet and then try to recall street names, the number of firefighters involved in the incident, "how many fire apparatuses are in the scene[,]" and which "vehicle is partially blocking the fire hydrant in front of the pizza store[.]"  Clearly, this memory recall is vital in order to work under the difficult conditions of firefighting, where seconds count and equipment can make all the difference in saving lives.

Questions 12-14 refer to a reading section about "housewatch duty," which means informing the personnel in the firehouse when a fire alarm or other emergency is reported.  The vocabulary in this reading is fairly basic.  The next reading section deals with using a portable power saw, which "improves operational efficiency by aiding firefighters with cutting operations."  A distinction is made among carbide tip blades, aluminum oxide blades, and silicon carbide blades.  No chemistry degree is required to understand the uses of these power saws.  This next question refers to chronological and fact-filled information needed to properly fill out a Pre-Hospital Care Report. 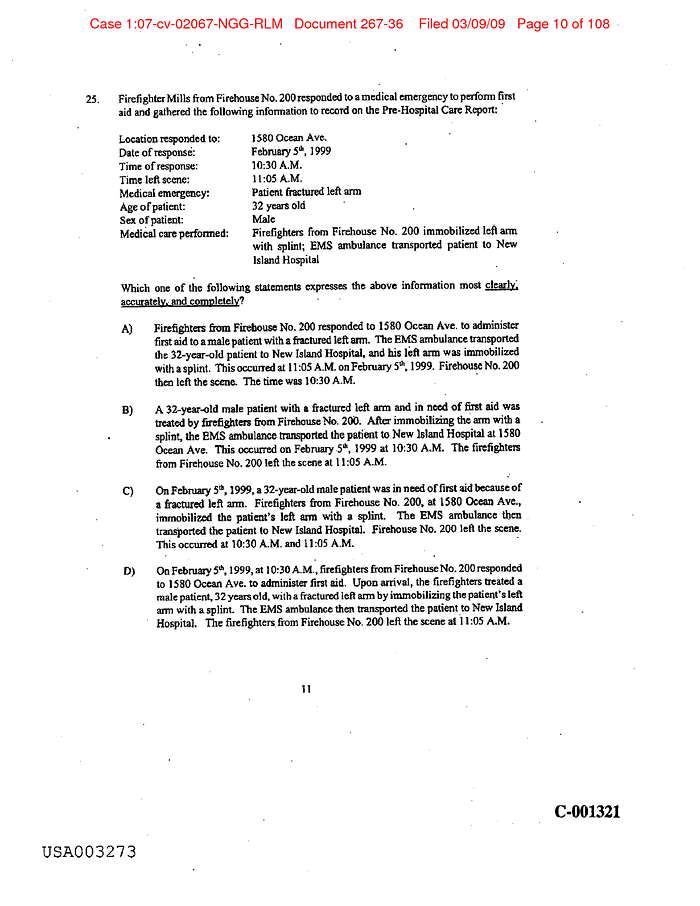 The next set of questions refers to visual perspective -- that is, "If a firefighter was standing on the top of a 95 foot ladder ... which one of the following would the firefighter see?"  It requires reasoning and spatial understanding of a scene, a skill that will be critical if a firefighter is "called upon to go into dark smoke-filled rooms that contain uncontrollable fire raging all around."

Additional questions refer to the proper sequence for refilling water extinguishers and foam extinguishers.  Questions 32 and 33 refer to time allotted to a firefighter to fight a fire when wearing a mask with air tanks.  Question 38 requires an attention to detail about maintenance on daily apparatus equipment.  Thus, the examinee must select the choice that best expresses the given information "most clearly, accurately, and completely."

Firefighting emergency vocabulary such as MAYDAY and URGENT is addressed, and the examinee is queried as to the proper situation in which to use these words.

Questions that depict the diagrams of an apartment building are given to test the best way to approach a fire, search for people, and determine the most "direct, interior route" to a specific apartment.  Again, visual and spatial knowledge are critical to quickly assess a scene.

Triage questions are asked in the following form: "Which one of the following victims is in the most immediate danger?"  Four choices are given.  Ethical examples are given in a reading passage, and then the examinee is asked which situation would "require direct notification" to the "Commissioner of Investigation or an Inspector General."  No prior knowledge of ethics is required.

Thus, throughout the examination, the same format of questions is given with different situations.  The directions clearly state to answer the question "based solely on the following information."  At no time does one's race or ethnicity enter into the questions or situations being given.

In the "Brief for Amicus Curiae Merit Matters" 11-5113-CV, the reader learns of Merit Matters, Inc, founded in April of 2012, which was created "out of concern for deteriorating standards for hiring and promoting within the FDNY."  Merit Matters advocates:

... for a strictly merit-based hiring system within the FDNY and strongly rejects the 'equal outcomes' approach to equal opportunity, and believes that Title VII lawsuits are often used as a vehicle through which legitimate, race-blind, employment examinations and race-neutral selection procedures are unfairly attacked by unqualified and unsuccessful job applicants who seek judicial invalidation of such procedures purely as a means to gain unfair preferences and advantages over others on the basis of their race or ethnicity.

Furthermore, "Merit Matters believes that race-based hiring and promotional selection procedures imposed as a remedy for racial statistical disparities in qualifications are not only unlawful ... but antithetical to the FDNY's mission. Moreover, imposition of such measures on public safety and first responder agencies has a deleterious effect on morale[.]"

The Brief explains how the City met with firefighters to "evaluate, or 'link' critical job tasks such as search and rescue, scene evaluation, ventilation, and salvage," in order to create questions for these examinations.

Moreover, before the 1999 exam was administered, the City undertook "efforts to encourage minorities to join the ranks of the FDNY through numerous initiatives targeted exclusively at minorities."  Thus, this outreach should "dispel any notion that [the City] engaged in intentional race discrimination and purposefully excluded minorities from equal employment opportunity."  Furthermore, "numerous advertisements were printed in both English and Spanish in minority-oriented newspaper and broadcast on television and radio stations."  In fact, "twenty recruiters per day were assigned specifically to conduct recruitment efforts in minority neighborhoods[,]" and "numerous black celebrities [were recruited] to record public service announcements."

The Brief explains that the multiple-choice test consisting of 85 questions is used to measure the following abilities including: Written Comprehension, Written Expression, Memorization, Problem Sensitivity, Deductive Reasoning, Inductive Reasoning, Information Ordering, Spatial Orientation and Visualization.  Furthermore, Merit Matters comments that "the examination questions were not extraordinarily challenging.  In fact the answers are contained in either a picture provided or in a short sentence immediately above the question," a finding that I discovered myself when I studied the questions.

Notwithstanding James Baldwin's essay entitled "If Black English Isn't a Language, Then Tell Me, What is?," would the examinees have been better-served if the questions were given in Black Slang, or ebonics?

Furthermore, why have Hispanics adopted such substandard expectations among themselves, to be aided and abetted by federal guidelines?  Recall the Ricci v. DeStefano case, where dyslexic Ricci "paid an acquaintance $1,000 to read his textbooks on to audiotapes. Ricci also made flashcards, took practice tests, worked with a study group, and participated in mock interviews. He placed 6th among 77 people who took the lieutenant's test."  Since when did being Hispanic or Latino or Spanish (the catch-all terminology of the federal government) become an impediment to doing well?

In citing Washington v. Davis, the Brief explains that two African-American males applied for positions in the police department.  They sued after being rejected because the department was liable by "implementing a test that required verbal skills."  Perhaps they should read Conversate Is Not a Word: Getting Away from Ghetto by Jam Donaldson.  According to Rose Arce of CNN, "the [firefighters] lawsuit alleged that the exams had little to do with firefighting and instead focused on cognitive and reading skills."

The idea that reading comprehension is not an important skill in firefighting is preposterous and astounding in its implications.  In fact, "the Fire Academy requires enormous amounts of reading in order to learn and understand departmental operations."  Manuals, policies, and procedures are constantly upgraded, and advancement in the fire department "mandates proficiency in reading comprehension as well."

Even more distressing, according to the Amicus, is that the "District Court has presumed the liability findings bestow the power to interfere with practices which were neither alleged by the Vulcans nor found to be discriminatory" in the first place.  Thus, "the injunction is invasive judicial oversight of the FDNY for a minimum of ten years via a special monitor with no knowledge or experience in firefighting and disaster response."

Consequently, "[t]he District Court's judgment and injunction essentially require the City to lower standards and abandon efforts to achieve excellence.  Merit-based hiring is being replaced with race-based or quota-based hiring."

In fact, Merit Matters cites the situation where:

... as part of the remedial measure aimed at combating the alleged intentional discrimination, the District Court ordered door-to-door home visits of black applicants who failed to properly complete the upcoming test application. During these personal visits a Vulcan Society member would assist the candidate in completing the application, to be re-submitted four months past the deadline. (DE #783). Merit Matters is troubled by the extension of such an undeniable privilege on the explicit basis of race, especially against the District Court's own racial rhetoric denouncing the FDNY as a bastion of white male privilege based on nothing but statistics. The fact that the District Court will deny the privilege of untimely submission of applications to candidates of another race raises troubling implications: it amounts to a judicial order for racially disparate treatment of applicants. Merit Matters believes firmly that a failure to properly complete and timely submit an application itself flags one's unfitness for the job. Notably, Merit Matters offered to conduct home visits to all candidates regardless of skin color. That offer was rejected.

One cannot be blind to the genuine discrimination that black firefighters faced over the years.  Thus, in 1858 in Richmond, Virginia:

The qualifications for Negro firefighters were the same as for the white firefighters [emphasis mine].  However, white recruits would go immediately to the fire stations for company assignments and into regularly scheduled training classes, whereas a special training program was required for the Negro firefighters[.] The black firefighters were trained for two months, twice the required time for white firefighters. Part of the reason the training was so long was the department erected separate sleeping quarters and bathrooms to house the four white officers and two white engineers. Black firefighters got most of the assignments to fight the constant dump fires and had to wash and clean the hoses for their own companies after a fire and sometimes for some of the white units at the scene[.]

These conditions no longer exist, and to fabricate the charge of racism is to dishonor the memory of those who fought for the privilege of being a firefighter.  In fact1, "[t]here's only one relevant question: Did racism and discrimination prevent otherwise qualified applicants from succeeding?" At the site AfroFireHire, an individual interested in becoming a firefighter learns that:

The written examination is a crafted elimination tool. It will eliminate poor learners, people who don't study and people who don't prepare[.] How then does one overcome failure in taking these written tests? Repetition is one tool. It isn't uncommon that a person takes their [sic] first firefighter written examination and passes it successfully. But there are more stories of candidates that have taken two or more examinations before they became familiar with the format and types of questions asked. This is one reason you are urged and reminded to not only search out firefighter employment opportunities but also to take each and every written examination you can.

There is much more that "goes into fighting a fire than just spraying water on flames and hoping for the best."  Yet, once again, politically correct affirmative action demeans those it is meant to ostensibly help, creates a chasm among the people who must work together as a team; costs the American taxpayer money; and creates an atmosphere of serious doubts concerning performance, trust, and safety.