Warning: mysqli_free_result() expects parameter 1 to be mysqli_result, bool given in /var/www/html/americanthinker/admin/common/functions/func.general.php on line 126
 Elena Kagan: The ObamaCare Recusal That Wasn't - American Thinker
|

When the U.S. Supreme Court releases its decision on the fate of the Patient Protection and Affordable Care Act, Justice Elena Kagan will cast a vote that should not have been counted.  The relevant rule requires that Supreme Court justices recuse themselves if in their previous capacity they served as "counselor or advisor" concerning a current matter before the Court, or if there is anything about the proceeding by which the justice's impartiality can reasonably be called into question.

E-mails released to Judicial Watch revealed that when in 2010 Obamacare passed and Ms. Kagan was 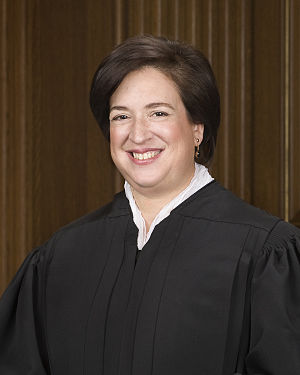 solicitor general, Ms. Kagan viewed the passage as "simply amazing" and that she assigned a deputy in her office to help prepare legal defenses to any challenges to ObamaCare.  When in another e-mail she was asked for her opinion on a meeting to discuss legal defenses to ObamaCare, Ms. Kagan replied, "what is your phone number?," indicating either that she had too long-winded a response or that she foresaw a possibility that her e-mails might force her to recuse herself if she sat in review of the law, or both.  At any rate, she had in fact participated as "counselor or advisor" of the law when she was solicitor general, and she is clearly not impartial about the fate of ObamaCare, so she should recuse herself in this case.

There are many other examples, but the most instructive example that I could find of justices recusing themselves was in the tragic case of the appeal of the killer of Michael Luttig's father.  J. Michael Luttig was an appellate judge in the 4th Federal Circuit Court of Appeals, and at one time was himself on a short list of possible appointments to the Supreme Court.

But earlier in his life, Luttig had clerked for Justice Scalia before Scalia was appointed to the Supreme Court, and Luttig had also worked in the George H.W. Bush administration, where Luttig advised nominees David Souter and Clarence Thomas on their Supreme Court confirmations in the Senate.

In 1994, Luttig's father was shot and killed in a carjacking in Texas, and the perpetrator was arrested, tried, convicted, and sentenced to die.  The appeal worked its way up to the U.S. Supreme Court, where three of the nine justices on the Supreme Court, Justices Scalia, Souter, and Thomas, decided to recuse themselves from hearing the case.  Apparently those justices felt that their professional relationships with the victim's son brought their impartiality into question.  No one had ever alleged that the recusing justices had ever known or even met the victim in this case, but the fact that the victim's son had clerked for one of the justices, and had advised two of the justices on their conformations in the Senate, convinced the justices that they should recuse themselves.

Clearly a different standard is being used in Justice Kagan's decision to stay in this case.  Not only had she e-mailed her excitement of ObamaCare's passage, but she has shared in the Obama administration's strategizing on the legal defenses for ObamaCare.  As sitting Supreme Court justice, Elena Kagan could very well be deciding on responses to arguments that she herself had helped formulate when she was solicitor general.

If ObamaCare survives its Supreme Court challenge with Justice Kagan's help, her refusal to recuse herself could become one of several rallying cries for conservatives who will try to repeal ObamaCare.  Let's hope it won't come to that.