The Fort Lauderdale Sun-Sentinel published an editorial shortly after the incident decrying the temple's "stifling" of Wasserman Schultz's speech and criticizing the synagogue for "advanc[ing] the voices of intolerance."  What the editorial board of the Sun-Sentinel failed to tell its readers was that Mr. Tate had not wanted Schultz's speech muffled, but had merely asked for equal time for rebuttal and to have the entire discussion moved to a venue other than in the sanctuary during a religious service.  It was a plea to his congregation of 70 years (whose Joni & Stanley Tate Early Childhood Center bears his family's name) not to endorse or give even an appearance of religious endorsement of Wasserman Schultz's political speech, and by extension a religious endorsement of President Obama and the Democratic Party's 2012 election campaign message. 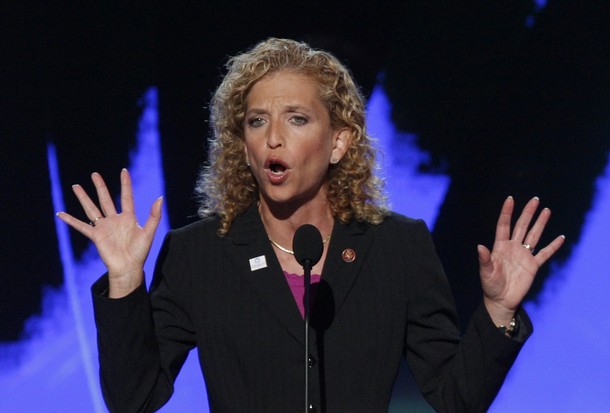 There is an irony in this church-state "speech stifling or speech endorsement" incident, because Debbie Wasserman Schultz was involved in another "church-state" "speech stifling or speech endorsement" issue in Florida almost ten years earlier -- an incident which the Sun-Sentinel characterized as a "nationwide controversy" but which received only eleven lines in the local section of the paper, buried within minutiae about local school board officials and a local judge's political ad.

In the summer of 2004 -- the same summer that Floridians were experiencing the devastating effects of Hurricanes Charley, Frances, and Jeanne, then Florida Democratic State Senator Wasserman Schultz had picked a fight with Governor Jeb Bush over the First Amendment, "separation of church and state," and what Wasserman Schultz complained was a "hurtful and offensive" display of a religious symbol inside the governor's office in Tallahassee that should "not [have been] imposed on the public" because it conveyed the wrong "message."

It wasn't a Nativity scene in the Florida capitol's entranceway during the Christmas holiday season or a sculpture of Moses receiving the Ten Commandments.  Nor was it a loan to the Republican governor of Titian's Pieta from the Gallerie dell'Accademia of Venice.  Wasserman Schultz complained about the display of a greeting card on the bulletin board hung above the Republican Governor's General Counsel's receptionist's desk along with several personal family photos belonging to the receptionist.  The greeting card featured a picture of the American flag with a white cross superimposed amongst the white stars on the flag's blue field background.  According to the Palm Beach Post's report about Wasserman Schultz's complaint, the artwork on the greeting card was designed by a Tallahassee photographer to commemorate the victims of 9-11, but Wasserman Schultz objected to its display because it sent a hurtful and offensive message that the country was a "Christian nation."  The Palm Beach Post article reported that Governor Bush's general counsel's response for its request for comment was that "it warrants no response."

Although almost no one in South Florida ever knew about the "nationwide controversy," the pre-Facebook and pre-Twitter internet lit up in angry response.  Among the more benign comments was a post by "Colorado Doug," who wrote, "Suppose a muslim employee had a greeting card with a crescent moon displayed, would Wasserman Schultz or anyone else be offended? I think the answer would be no."  "ZULU" commented, "If Ms. Wasserman ever took the time to visit Normandy, she would see a sight which, no doubt would horrify her -- rows and rows of crosses and stars of David."  Someone named "Anonymous" wrote: "To me, your face is offensive and hurtful, but my solution is to avoid looking at it."  Most of the comments were so vile and anti-Semitic that neither the Palm Beach Post nor the Sun-Sentinel would reprint them.

I wrote to the Sun-Sentinel about the "nationwide controversy," and although almost every letter I have ever submitted to the paper has been published, this one wasn't.  My letter contained a message that the Sun-Sentinel didn't want its readers to hear, although I did get a personal note from the reporter who had written the eleven lines thanking me for "sharing" my thoughts with him.

In my letter to the paper, I explained that 20 years earlier, in the mid-'80s, I had represented seven churches in Scarsdale, New York that had sued the Village of Scarsdale when their jointly and privately owned Nativity scene was no longer allowed to be displayed for two weeks in a public park in the center of town, where it had been displayed amongst other Christmas decorations for over a quarter of a century.  The case was so controversial that the large New York City law firm where I was a junior associate didn't put its name on the briefs -- just mine and the senior partner's.   We argued that the temporary display of a crèche in a public park during Christmas was constitutionally protected symbolic speech and that the Establishment Clause of the First Amendment -- often colloquially referred to as the "separation of church and state" portion of the First Amendment --  didn't permit Scarsdale to suppress our clients' speech in the absence of any reasonable time, place, and manner restrictions governing the use of Scarsdale's parks.  We never expected the case to end up in the United States Supreme Court, but it did, and we won by a 4-4 split vote affirming our victory below in the Second Circuit Federal Court of Appeals.  I told the Sun-Sentinel in my letter that not only was Wasserman Schultz wrong on the law -- there was no governmental endorsement of religion by a secretary's display of a cross on a greeting card in her own personal workspace, no matter how visible the location was to the general public -- but the state senator was also wrong on the facts.  My experience in the Scarsdale crèche case had taught me that constitutionally ignorant and tone-deaf politicians like Wasserman Schultz engender more anti-Semitism when they use "offense" and the "First Amendment" to attack their political opponents.  The reaction to the Anti-Defamation League's Amicus Curiae brief against our church-clients' nativity scene was a perfect example of this regrettable phenomenon.

Wasserman Schultz currently faces a Republican opponent in the upcoming 20th Congressional District -- Karen Harrington -- who has already received the endorsement of prominent Jews in Florida (including Stanley Tate) as well as many national and state representatives.  Harrington is a small business owner who has run a family restaurant with her sister for thirty years.  Now that South Florida synagogues will likely turn off the speech spigot for Wasserman Schultz and other Obama surrogates, the DNC chair will no doubt turn to making more rounds on the Florida condominium circuit praising President Obama and the Democratic Party.  But she has a tough sell: Florida's seniors as well as the state's general electorate are ravaged by Florida's real estate crises and unemployment figures.  And Florida's seniors, who are deeply worried about funding ObamaCare, recognize that there are wiser and more surgically precise approaches to Medicare and Medicaid reform.

After the Temple Israel debacle in Miami, the Obama Team and the DNC have figured out that that the choice of Wasserman Schultz was a perverse choice for "Jewish outreach" in Florida.  Many of Wasserman Schultz's Jewish constituents don't care deeply about Israel.  (Those who do would have voted for Romney anyway.)  The others are more like Wasserman Schultz herself on the subject: agnostic, uninformed about Middle East history, and uninformed about Obama's "Love Me I'm Not George Bush" Middle East foreign policy.  The Wall Street Journal published an eye-opening piece about the Florida congresswoman back in February this year, which did a light air kiss on Wasserman Schultz's polarizing comments about the Republicans' "Jim Crow" laws and the Tea Party's blame for the shooting of Congresswoman Gabrielle Giffords.  The Journal piece mentioned Wasserman Schultz being asked by President Obama's advisers to meet with "two seasoned Democratic female pros, Anita Dunn and Hilary Rosen."  Hilary Rosen, of course, was the "seasoned" expert who decided that attacking breast cancer and MS survivor Ann Romney for "never working a day in her life" was a brilliant way to frame the Republican "War on Women."

Meanwhile, South Floridians expecting any balanced editorializing on the subject of Debbie Wasserman Schultz will have a tough time finding it at the Sun-Sentinel.  This is, after all, the same newspaper whose local editorial columnist, Stephen L. Goldstein, thinks nothing of exhorting readers to perform a "Mitzvah" by voting Democratic, not Republican ("Democratic Punch": Sun-Sentinel January 31, 2010).

Sara Goodman is an attorney practicing in the areas of intellectual property law and commercial contracts.  She may be emailed at lawofficeofsaragoodman@gmail.com.