Warning: mysqli_free_result() expects parameter 1 to be mysqli_result, bool given in /var/www/html/americanthinker/admin/common/functions/func.general.php on line 126
 Are You a Victim of Islamic Intimidation? - American Thinker
|

Are You a Victim of Islamic Intimidation?

By Oleg Atbashian and Larissa Scott

On June 5, 2012, a radical Islamic organization, CAIR-Florida, sent out a mass mailing with this message:

CAIR Florida has been receiving an increase in complaints by law abiding American Muslims inappropriately targeted by law enforcement for questioning.  This is a direct result of Islamophobic training CAIR has discovered many law enforcement officers in Florida are receiving.  Join us this Saturday for an important program to learn how to protect yourself, your family, and your community against harassment by law enforcement or discrimination by businesses. (See screenshot).

Without verifiable proof of such "discrimination by businesses," "Islamophobic training" or "inappropriate targeting by law enforcement", this email appears to be a blatant slander of the tolerant American society and its legal system.  The extensive influx of Muslim immigrants in recent years is the best evidence that they are treated better in the U.S.A. than in their own countries of origin.  So what motivates CAIR to besmirch their host country and stir discontent? The answer lies in the old playbook developed by the radical Left and now passed on to the new radical players: calculated fear mongering.  Such messages are designed to keep American Muslims misinformed, scared, and running for CAIR's protective cover.

In this example, CAIR was promoting its own so-called "Civil Liberties" Conference titled "Know Your Rights," with the apparent purpose of encouraging Muslim immigrants to disobey American laws, resist law enforcement efforts, and game the system with frivolous lawsuits against local businesses and government agencies that result in more political power and personal enrichment - all under the aegis of CAIR.

The email included this flyer:

Are you a victim of employment discrimination? Have you been contacted by the FBI or harassed by law enforcement? Is your employer giving you a hard time because of your hijab or won't give you time to pray? Have you or someone you know been mistreated for practicing your faith? Treated unfair? Call CAIR.  Contact CAIR Florida.  We are here to help.  813-514-1414. 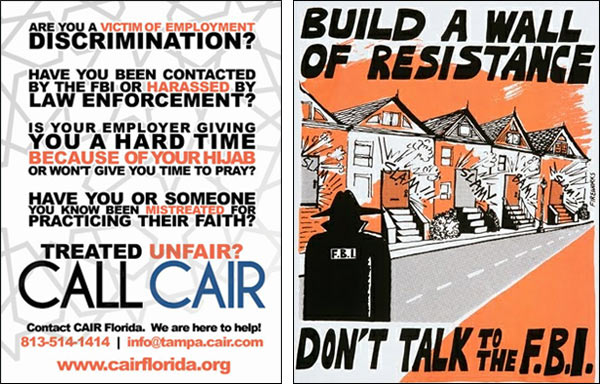 This message represents the ongoing phenomenon of lawfare -- a form of asymmetric warfare used frequently by CAIR and other Islamic supremacist groups to establish precedent and victory in our legal system.  It is complemented by the "Build a Wall of Resistance" campaign, created by CAIR's San Francisco chapter last year to promote their event, "Don't Talk to the FBI."

According to Steven Emerson, founder and executive director of The Investigative Project on Terrorism (IPT),

"CAIR's hostility toward law enforcement is long-standing, but the organization's rhetoric has increased since the FBI cut off formal communication with the group in 2008.  That decision was based on exhibits admitted into evidence during a terror-financing trial in Dallas that showed CAIR founders were part of a Hamas-support network."

CAIR's faith-based protection racket is now working its way to replace all other means of social interaction for Muslim immigrants, aiming to become the only game in town for all American Muslims.  By the rules of this game, in exchange for "protection," they dare not assimilate and integrate into the larger society, accept American traditions and values, and -- most importantly -- dare not leave Islam.  The only winners will be the radical Muslim elites who manipulate their constituents through such front organizations as CAIR, ISNA, ICNA, and others.  The losers will be the rest of us, including the Muslims themselves, especially the law-abiding, assimilated immigrants among them.

The framework for such games has been inadvertently established by the fallacious multiculturalist doctrine.  As every utopian idea before it, multiculturalism has created the opposite of the intended result, along with the proliferation of scams and abuse of other people's idealism.  Instead of bringing peace to the nations that have tried it, multiculturalism has created division, hostility, and balkanization.  In the United States it also allowed for the rise of radical collectivist pressure groups and separatist movements, such as La Raza, Black Panthers, and others -- all of them intrinsically aligned with the radical Left.  Muslim radicals joined in the con years later, but they quickly learned how to capitalize on the existing ideological and litigious infrastructure, achieving an even greater prominence than their predecessors and in much shorter time.

Omar M. Ahmad, founder of CAIR, once said: "Islam isn't in America to be equal to any other faith, but to become dominant... The Koran, the Muslim book of scripture, should be the highest authority in America, and Islam the only accepted religion on Earth." It is apparent that CAIR's goal is not so much to contribute to the American society, but rather to replace our constitutional republic with an oppressive Islamic theocracy.  Their efforts to set up the groundwork for this have been so far successful.

Freedom-loving Americans who oppose premeditated destruction of their cultural and political integrity are being silenced with lawsuits and the myth of "Islamophobia." Their opponents have learned how to take advantage of democratic liberties, such as the right to free speech, free expression, free press, free assembly, freedom of religion, and equal protection before the law.  But in a society the Islamists are planning for us, there will be no place for any of these individual freedoms, as evidenced by the Sharia-based totalitarian systems currently being implemented in the Middle East by the international Islamist alliance known as the Muslim Brotherhood.

All world cultures, Western and Muslim alike, share the same moral conviction, which is commonly reflected in their laws: those who show contempt for human life by committing remorseless, premeditated murder justly forfeit the right to their own life.  By this moral and legal standard, shouldn't remorseless radical groups that profess contempt for our individual freedoms and actively promote their demise, forfeit their own right to enjoy these very individual freedoms? Shouldn't their premeditated efforts to destroy the rule of law make them ineligible to be protected by these very laws?

These questions are for constitutional scholars to answer, but in today's hostile political climate affecting all branches of the U.S. government, they will fall on deaf ears.  The White House has recently admitted to having hundreds of behind-the-scenes meetings with CAIR; Eric Holder's Department of Justice routinely intervenes on CAIR's behalf to greenlight new mosque construction; another Muslim group recently sued NYPD for lawful surveillance; Muslim employees in Minnesota refused to comply with new dress codes that ban long dresses, including burqas, and walked out in protest -- but not before calling CAIR for protective cover.

When Eric Holder's DOJ routinely steps in as muscle for CAIR's ongoing litigation jihad; when Muslim employees are instigated to bring about unreasonable lawsuits against their employers; when American Muslims feel overwhelmed or bullied into silence by radical groups that claim to "represent" them, good and honest Americans must say "enough is enough" and, in the absence of government protection of their interests, resort to individual action and seek effective alternatives.

The Florida chapter of Stop Islamization of America has done just that. Calling CAIR-Florida's flyer "offensive to our law enforcement officers and to Florida business owners," they have created this counter flyer:

- Are you a victim of intimidation by an Islamic group?

- Has your business been threatened by CAIR or any other Muslim organization?

- Are you being harassed by frivolous claims of discrimination?

- Do any of your Muslim employees demand preferential treatment, additional breaks for prayer, or dress code accommodation? 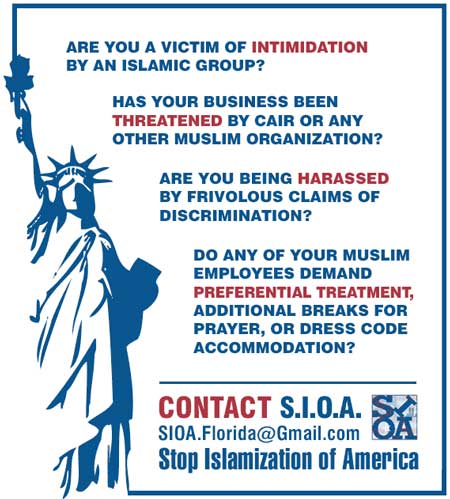 And patriotic, counter-jihad attorneys are standing by.