The ObamaCare Mandate: Are Catholic Martyrs Not Far Off?

Those unfamiliar with Catholic theology don't understand why Church officials can't be more flexible when it comes to ObamaCare and the contraceptive mandate.  After all, the Obama administration offered a supposed compromise.

There are reasons why Church officials can't be flexible.  The most important reason is because the Church's position on contraception and life goes back thousands of years -- some say to Deuteronomy 30:19.

Furthermore, the Catholic position on contraception and other matters like same-sex marriage is thought to be not just opinion, but objective truth.  It is a position held by the light of both reason and revelation.

Yet even in the face of this theological certitude for Catholics, some still argue that the Church must be patient when it comes to the contraceptive mandate.  In time, these political matters will all blow over.

In Matthew's Gospel (10:16), Jesus tells his disciples, "I am sending you out like sheep among wolves. Therefore be as shrewd as snakes and as innocent as doves."

Many Catholics may be asked, soon, to be shrewd as snakes and innocent as doves -- and especially Cardinal Timothy Dolan.  In his interviews with the New York Post and MSNBC, Cardinal Dolan talks about matters that are creating an ethical dilemma for Catholics that may not soon blow over.

In his New York Post interview, the cardinal addressed ObamaCare and the mandate that forces Catholics to violate their consciences.  Some see the cardinal being both shrewd and innocent in his responses.

When asked by reporter Kate Briquelet what he plans to do about the contraception mandate, Cardinal Dolan answered, "What recourse does any citizen have?  Like any other citizen that feels aggrieved, we go to the judiciary, and I don't think we'll be reluctant to do that."

The cardinal added, "It's not about contraception, not about a Catholic issue. It's not about partisan politics[.] ... This is a radical violation of the First Amendment."

What the Cardinal did not say in his interview was also important.  At the end, Kate Briquelet reports that "... Dolan said he wouldn't ask people not to support the president because of his health care policies."

The contraceptive mandate places not only the Catholic hierarchy, but also many believing Catholics in a moral bind.  In fact, the mandate raises the question of how those who call themselves Catholic can support these issues.

How the Daleys of Chicago, Vice President Biden, ex-Speaker of the U.S. House of Representatives Nancy Pelosi, and HHS Secretary Sebelius, all professed Catholics, can be members of a political party or an administration that supports the contraceptive mandate boggles the mind of many who try to understand their moral reasoning.

The Cardinal and Illegal Immigration

Added to the controversy on contraception, Cardinal Dolan's comments on illegal immigration seem perplexing to some.  Just what Republican immigration policies Cardinal Dolan refers to in his interview with MSNBC are not clear.

Is the cardinal being shrewd and burning the political candle at both ends here?  When Cardinal Dolan speaks about illegal immigration, it seems to some that he is sending a message to the Democrats that if they back off on the contraceptive mandate, then the Church will work for immigration reform.

Recently, the pope visited Gunajuato, Mexico with a message of hope for many poor Mexicans.  Cardinal Dolan, with an immigrant Irish Catholic background, knows that most of the illegal immigrants to the United States are Mexicans.

Many struggling Catholic parishes in the United States need donations from Mexicans, even if these people are in the United States illegally.  According to reporter Andra Varin, "Cardinal Timothy Dolan called Wednesday for sweeping but compassionate immigration reform, saying laws that separate families ... are 'not Christian' and 'not American.'

"Appearing on MSNBC's 'Jansing & Co.,' the recently elevated cardinal said the Catholic Church has traditionally welcomed immigrants. He said Republicans must 'come up with a much saner, more civil, more just immigration policy.'"

In addition, in his article, "Catholics, Immigration and the Common Good," Dominique Peridans asks a fundamental question: "Why is the Catholic Church in the United States not addressing the imbalance in immigration, i.e. the disproportionately high numbers from Mexico?"

Could the answer be that the Mexican Catholic Church has problems of its own, similar to the ones that Cardinal Dolan now faces in the United States?  Cardinal Juan Jesús Posadas Ocampo was assassinated by drug lords in the parking lot of Guadalajara Airport, along with six others, allegedly mistakenly in a shootout between rival drug gangs.  To what degree does the Church in Mexico look the other way when the drug cartels carry out their assassinations and encourage drug addiction?

Recently, stories have appeared in both the Mexican and U.S. newspapers about drug money flowing into the coffers of the Catholic Church.  It is not far-fetched to say that as more illegal Mexicans come to the United States, these illegals will bring the problems of Mexico with them, especially the murderous activity of the drug cartels.

In his article, "Are Mexico's Drug Cartels Funding the Catholic Church," Tony O'Neal writes, "[T]he impoverished village [Pachucha] celebrated the construction of an ostentatious 1,000-acre house of worship ... affixed to the church's entrance is a bronze plaque praising the project's sole benefactor, Heriberto Lazcano[.] ... But as it turns out, Lazcano is more than a devout Catholic. He's also one of the most feared and vicious drug lords in the country--a gangster who's earned worldwide notoriety as the head of one of Mexico's most ruthless drug cartels."

With so many pokers in the political fire, Cardinal Dolan needs all the prayers good men can offer for him.  Next year, Cardinal Dolan may be in a position where he will have to preach not only against ObamaCare, but against the Mexican drug cartels as well.

That could be a dangerous sermon to give.  Bishops in Italy already face such dangers.

Are Catholic Martyrs on the Way?

In his article for "Catholic New World," Cardinal George writes: "[W]e all stand before Christ and give an accounting of our lives. ... I ask lay Catholics and others of good will to step back and understand what is happening to our country as the church is despoiled of her institutions[.]"

Cardinal George continues, "The suffering being imposed on the church and on society now is not a voluntary penance. We should both work and pray to be delivered from it."

A cardinal is not often forced to bear witness to his faith with his life or livelihood.  Saint John Fisher and Cardinal Stepinac are exceptions.

Catholic martyrs are often priests and the faithful lower down on the Church's hierarchy.  It's like that in any bureaucracy.  In the Middle Ages, they used to say, "Kings fight wars, but peasants die."

In modern countries, men and women who become martyrs are not broken on the wheel or rack, either.  There are other methods.

The trial of a modern-day martyr goes something like this: the individual confronts the state.  The state wants to have the individual deny his God or his conscience.

The alternative is to lose your job, but not your head.  After that, your friends avoid you and are silent.

In our time, Obama and HHS Secretary Sebelius -- the latter, again, a professed Catholic, and recently invited to speak at Georgetown University -- want Cardinal Dolan to offer free contraception.  It's just a small matter...small as a pill.

Centuries ago, it was a small matter, too: just a little flame from a candle on a Roman altar dedicated to Caesar as a god.

What will Catholics do when asked to violate their conscience?  The Polish painter Henryk Siemiradzki (1843-1902) shows us what some Christians did at the time of the Roman Emperor Nero.

Siemiradzki was known for his depiction of scenes from the ancient Roman world and the New Testament.  In his great painting, "Nero's Torches," he shows us a world where Christian martyrs are forced to wear "shirts of flame."

These men and women were covered with tar and straw, lifted up on poles, and then set afire.  Their burning bodies lighted Nero's garden so his invited guest could see what dish to eat at the emperor's banquet. 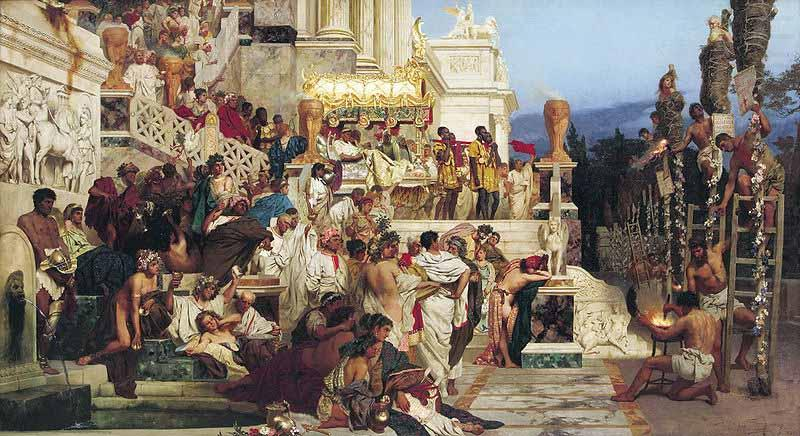 Men make choices.  Sometimes their lives and their souls hang in the balance.  Will Cardinal Dolan give in to Obama and the Democrats, or will he close Catholic schools and hospitals?

Robert Southwell would know also what to do when faced with an existential choice that violates his conscience.  He was forbidden to say Mass in England under Protestant rule.  In his case, the matter was not a little pill, but an innocent wafer of bread.

Being a young man about 34 years old in 1595, Father Southwell went to England.  He ignored what was forbidden and was arrested.

For his crime, he was drawn and quartered.  Reports say that at his public execution, silent believers dipped the tips of their handkerchiefs in his martyr's blood.

Shrewd as Snakes and as Innocent as Doves

What can Cardinal Dolan expect from the Obama regime?  That regime is not as innocent as a dove.  Perhaps the case of Colonel Terry Lakin will be an example for the cardinal.

Colonel Terry Lakin refused deployment because he doubted that Obama was a natural born citizen and therefore was not qualified to be commander-in-chief.  He therefore asked for a copy of Obama's birth certificate.

Obama could have shown that copy, for he would do so later.  Instead, he showed that he was willing to watch a good man go to jail.

The Marxists in the Obama administration now want to force a choice on American Catholics.  Evil men take pleasure in making good men anguish over their faith.  They will take pleasure in creating Catholic martyrs, too.

The time may come soon when it will be clear to voters that they can't be both Democrat and Catholic.  Writing in The American Catholic, Donald R. McClarey believes that "[w]hat we have seen over the past few decades is the evolution of the Democrat party into an overtly anti-Catholic party."

So, what to do?  Will many Catholics suffer a change of heart and remove themselves from the Democrat Party?  Or will Catholics be as shrewd as snakes and as innocent as doves, playing an astute political game where both Democrats and Republicans are courted, and in which the Catholic Church will be able to back away from a moral cliff that could force some men and women to bear witness?

For a long time, Democrats and Catholics have marched hand-in-hand in the United States.  Paul A. Rahe writes in his article, "American Catholicism's Pact with the Devil," "I would submit that the bishops, nuns, and priests now screaming bloody murder have gotten what they asked for."

"The weapon that Barack Obama has directed at the Church was fashioned to a considerable degree by Catholic churchmen. They welcomed ObamaCare. They encouraged Senators and Congressmen who professed to be Catholics to vote for it."

Maybe the best advice for times like ours, where good intentions lead to bad outcomes and where drug money is transformed into silver crucifixes, is to do your best to avoid being a martyr.  When Abbé Sieyès was asked,  "What did you do during the French Revolution?," he answered, "I survived."

Perhaps Cardinal Dolan's shrewd hope that the U.S. Supreme Court will overturn ObamaCare may be realized.  If not that, then what?

Maybe Cardinal Dolan will ask the not-so-innocent Mexican Catholics who are in the United States illegally to be courageous and return home.  They need to work for change in their own country.

As the matter stands now, we have Cardinal Dolan's words, as reported by Keith Koffler.  In response to Obama's demand that the Church comply with the contraceptive mandate, Cardinal Dolan faithfully replied, "Well, sir...I can tell you now we're unable to comply."