Apparently, my previous article on the famous "Situation Room" photo tapped a nationwide nerve.  The response ranged from some eye-opening tips on other photos to a few perplexed criticisms as to the motivation for Photoshopping a Situation Room photo.

The answer to that latter question can be summed up in one simple thought: To hide the truth.  Obama was out golfing while the OBL mission was unfolding, and the administration needed the Situation Room photo op for public perception -- to give the illusion that he's presidential. 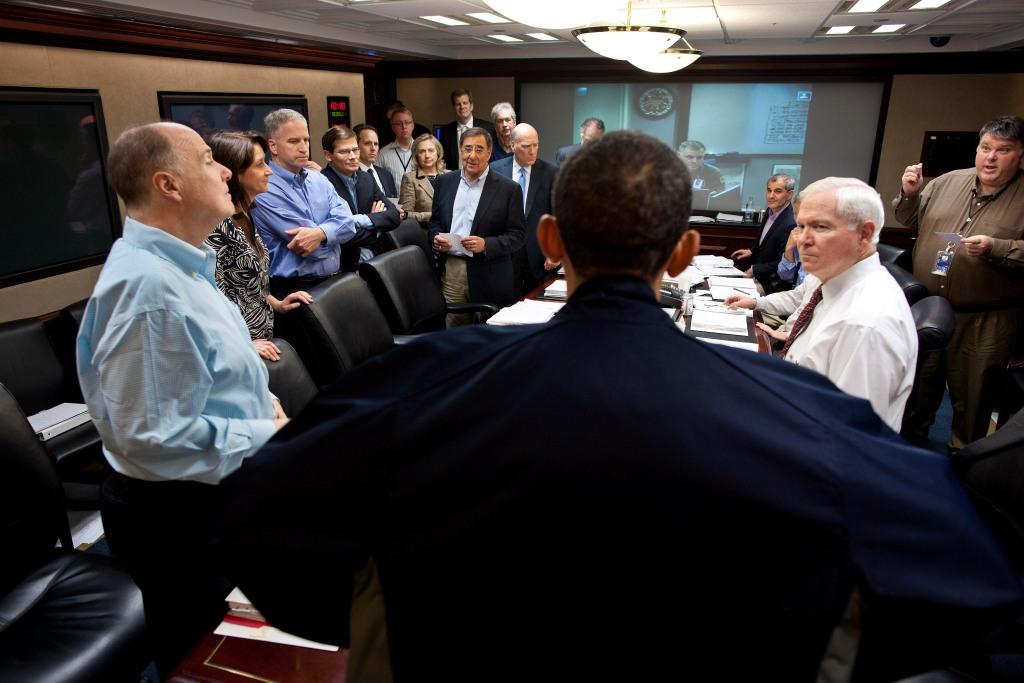 Obama's entire "Composite Presidency" and administration are orchestrated in this fashion.  Not only is the photo's legitimacy in question, but so is the narrative illusion behind it.  Obama knew of OBL's location for a year and refused to act.  The CIA admits that there was "no live video feed," as implied by the iconic White House photo.  It is anyone's guess what the captive audience was looking at, but it wasn't the OBL raid.  It was recently reported that a highly lawyered CYA memo was drafted that made it clear that the military would take all blame for any errors, while Obama would claim all glory for successes.  Not surprisingly, the real heroes seem to have a problem with this form of spiking the ball and using our brave SEALs for political gain.  Why would Obama need to Photoshop the Situation Room photos?  For the same reason behind everything else he does: to influence perception in which everything is about Obama.

As a follow-up to the previous article, a second "Situation Room" photo will be the target of discussion here.  For those who would like to download the image, a high-resolution version can be found here.  This White House Flickr link is a great place to check for high-resolution sizes of many of the White House photo sets released.

At first glance, the image overwhelms the viewer with a massive backside of Obama's jacket -- oddly oversized shoulders and arms supporting another small-head redux. Any more photos like this, and one might start speculating that Jeebs is the inspiration. 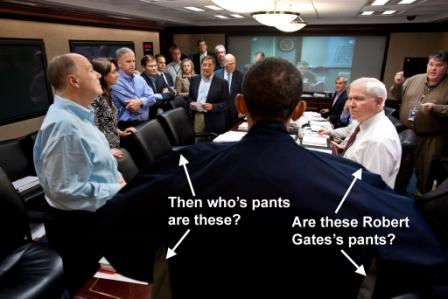 In all fairness, the initial impression leads the eye to believe that the beige fabric under the right armpit belongs to Robert Gates' pants (standing near Obama on the right).  However, if that were the case, then who would be attached to the pant leg under the left armpit?  It's not intuitively obvious, and it takes the viewer a little time to eventually come to a conclusion that these fabric strips are side panels built into the jacket design.  Maybe the New York Times found the prese

nce of this fabric an odd distraction as well -- and the reason behind their cropped version.

Even with this oddity solved, the image is not without significant problems.  Moving up the Iron Man-like shoulders to the blurry Jeebs-sized head, zoom in for an extreme close-up of the right neck edge and ear.  The right edge of the neck is missing a small but important piece -- it suffers a disappearing act as it approaches the jacket edge and displays a transparent gap (where a phone sitting on the desk can be seen through the neck). 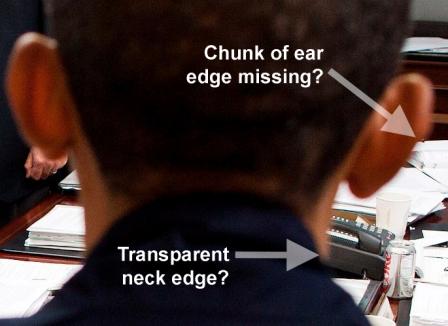 The right ear is also inconsistent along the defining edge. The top ear rim edge is blurry but still clearly visible (similar to the left ear edge), but as the eye travels down around the right ear edge, an abrupt chunk is taken away from the outer ear rim, and the remaining pixel edge transition is significantly sharper (less blurry) for the lower portion. 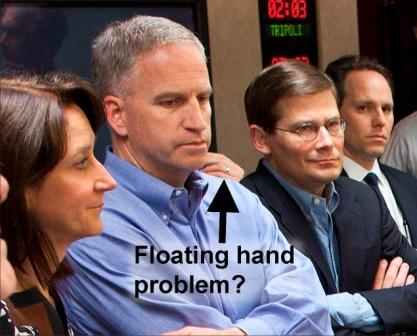 Shifting to a different image section, it appears that there is a floating hand among the Situation Room attendees.  Just to verify that a body wasn't being eclipsed by the folks in front, it seemed reasonable to obtain some answers by examining the reflections in the monitors on the wall behind them.  By applying an image adjustment to lighten all the color values in the monitors, the reflection detail becomes more pronounced and easier to discern.  Keep in mind that the adjustment applied to the monitors will distort color values -- thus the shirt that appears white could be the blue-shirted man seen in the photo.  That said, the man in the reflection has his hand in front -- near his chin -- not at his back.  The curvature of the fingers appears different from that of the floating hand's, as well as the fact that it is a man in the reflection, while the floating hand displays feminine characteristics. 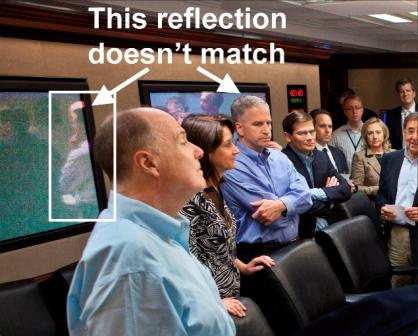 The blue-shirted man standing in the room does not appear to be a match for the man in the reflection.  So 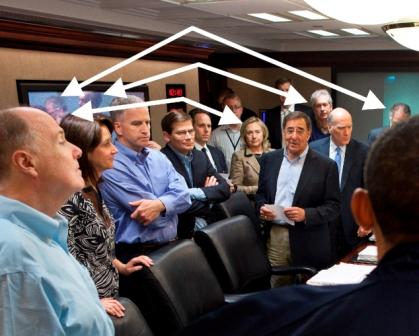 In case you were wondering how the people in the room translate to the rear monitor reflections, a capture is provided for your evaluation.  Keep in mind that the reflections are at angles similar to looking in a mirror and viewing information at the opposing angle.

Shifting gears to the first "Situation Room" photo, found here, a few more problems were neglected in the last article. 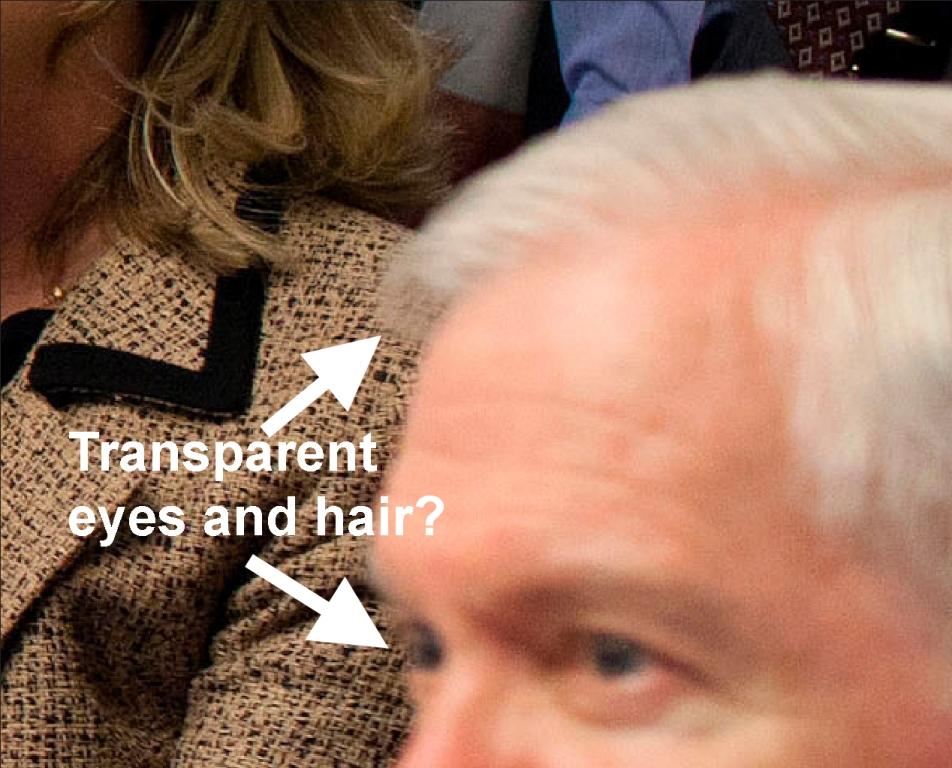 A dashed line in the capture shows the area that resembles a masking attempt to give a natural illusion.

A final note focuses on the blurred photo in front of Hillary Clinton, in which the White House narrative offered the explanation that the blur was necessary to hide sensitive material.  Fair enough.  However, how is it that this supposedly sensitive document was obscured, while the binder sitting on Hillary's lap is left

untouched?  The first line printed at the top of the binder clearly states "TOP SECRET CODEWORD NOFORN*" with a second line message "FOR USE IN WHITE HOUSE SITUATION ROOM ONLY."  Keep in mind that the codename for the OBL mission was leaked as "Geronimo," so this is obviously a different codeword.  Is this another disturbing attempt to casually release confidential information to our enemies?  In light of numerous stories, most recently the secret-under-the-radar program to release Taliban detainees -- it's not hard to get the feeling that the mission of this administration is to sabotage the safety and sovereignty of this nation rather than protect it.

Mara Zebest is a graphic artist and co-author for a number of Adobe product books, including the Inside Photoshop series, which typically exceeded 1,000 pages, published in at least ten different languages around the world.  She is also tech editor for numerous books for both Adobe and Microsoft products and has worked closely with the Cold Case Posse (CCP) for Maricopa County Sheriff's Office (MCSO) in providing evidence on Obama's forged birth certificate.