Former Michigan Governor Jennifer Granholm was recently on This Week With George Stephanopoulos, spouting the usual left-wing nonsense as a counterpoint against California Republican and former Senate candidate Carly Fiorina.  Granholm typified the Democrats' pervasive failure to understand that taking money from productive people to give to the unproductive destroys investment and productivity -- but her comments about the government bailout of General Motors must be addressed.  After all, we cannot have Democrats in high places misleading their constituents, thereby getting the green light to continue to wreak havoc on America's most crucial industries.

Sunday Sound: Heard on This Week with George Stephanopoulos - April 29, 2012

FIORINA: So let's just stipulate that everybody at this table, and the vast majority of politicians, are interested in creating as many jobs as possible and raising as many people out of poverty as possible. The data from the real world is crystal clear and all you have to do is go to our home state of California. California used to be the most vibrant economy in the world. And what is it today? It is an economy with yawning budget deficits, deteriorating public services, double digit unemployment. And what's happening in California? People are leaving.

GRANHOLM: Let me put Michigan on the table as a counter example. Michigan had the toughest economy in the nation for the first decade of this past year (sic) because of the loss of automotive and manufacturing jobs. There was a decision by the Obama administration to intervene. At that point, we had hit bottom. Our unemployment rate was 14.5 percent. It's now 8.4. It's the second quickest -- the second fastest drop of any state in the country. But the reason is, because there was a decision made to intervene (i.e., Government Motors) to save that industry, put it on solid ground. They had great management. There was a decision made to intervene to allow us to diversify the economy. And as a result, Michigan is now seeing a recovery. The hands-off strategy would not be working.

"Pravda" is a Russian term usually translated as "truth," but as the Russian people use the term, "pravda" would be more correctly rendered as "the official word."  The official word in Michigan, as spoken by ex-Governor Granholm,  is dishonest nonsense, just as it was in Soviet Russia.

For starters, General Motors and Chrysler priced themselves out of the market by giving unsustainable benefits to union members.  When the Democrats' Unaffordable Housing Project Bubble crashed in 2008, it hurt all states, and most particularly the ones that were  overextended.  There are bankruptcy laws to deal with this type of situation, and these bankruptcy laws have worked well when they have been applied even to large organizations, such as the multiple airlines that have gone bankrupt, reorganized, and continued operation.

When a company is overextended and goes into bankruptcy, there is a certain amount of disruption, but nothing is lost, with the probable exception of the managers who created the unsustainable business environment.  When an airline company goes bankrupt, aircraft are not destroyed, maintenance personnel do not lose their skills or their tools, pilots do not lose their pilots' licenses, and there is a continuing need for passengers to get from one point to another.  After a  reorganization, the situation re-establishes itself, probably with a more efficient and competitive edge, and the formerly bankrupt airline continues to operate, paying taxes to help support the government.  By law, this is what should have happened to Government Motors.

GM was treated quite differently by Obama, with quite different results.  Ignoring the law and following Item 7 in The Communist Manifesto, Obama seized GM from the rightful owners and turned much of it over to his union supporters in the UAW, whose pay and pensions helped drive GM into bankruptcy in the first place.  And Granholm's take on what happened to the Michigan economy is somewhere between dishonesty and lunacy.

Michigan lost 857,000 jobs from April 2000, when the dot-com bubble cracked during the Clinton administration, until 2010.  It is true that Michigan has recovered some jobs since 2010 and that the official (pravda) unemployment rate is better than it was, but there are still some 700,000 missing jobs in Michigan.  Some of those jobs moved to other states, and many represent discouraged workers who have stopped looking for work.  Regardless, there are now 700,000 fewer jobs in Michigan; these missing jobs take with them the taxes missing workers would have paid, and the missing taxes do not contribute to the upkeep of the state, its schools, and its institutions.

Contrary to what Granholm says, General Motors is not on "solid ground."  The bailout money that GM received under TARP has not been repaid, to the tune of some forty billion dollars, including $14.5 billion owed by Ally Financial (formerly GMAC).  Moreover, TARP funds were placed in an escrow account for GM, and GM used $6.7 billion of those taxpayer dollars to repay the money owed to the taxpayers.  Neat accounting trick if you do not get caught.  So at least some $46 billion of taxpayer funds went to benefit union workers and to help put the Michigan state financial house in order.  Yes, if you can steal $46 billion from someone else, you can pretend that you have "great management" and that you are on "solid ground."  But it is still nonsense. 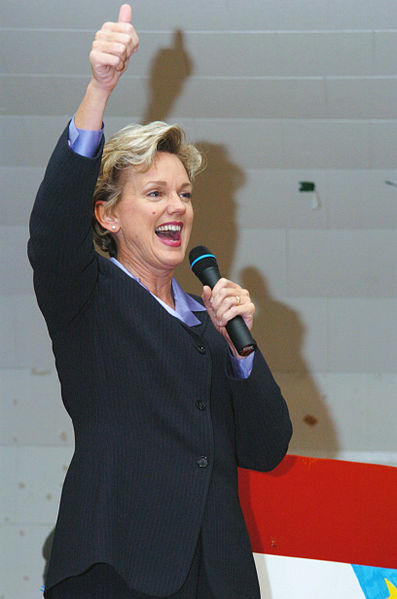 Governor Granholm has become a star of the Democratic Party and of the Obama administration, with only a pretty face, a Socialist ideology, and repeated failures to recommend her.  Granholm's popularity rating in Michigan fell to 32% in 2007, among the very lowest ratings among sitting governors.  In one of life's little ironies, Governor Palin's popularity in Alaska was 90%, the very highest among governors.  So it was only logical that in 2008, VP Candidate Biden held practice debates with Granholm playing the role of Palin, while the mainstream and Hollywood media repeatedly assailed Governor Palin.

From Fiorina's and Granholm's original statements, it is obvious that whatever Michigan gained from the Government Motors bailout, the rest of the country lost and must repay, plus the cost of the bloated federal bureaucracy required to administer this farce.  But the greatest cost is borne by those who are least able to pay it.  Detroit is one of those Democratic Party ghetto cities, where Democratic Party policies have kept the poor mired in poverty, drugs, and crime for decades.  Blacks and particularly black teenagers have been disproportionately hit by the Great Recession.  When blacks realize what the Democrats have done to them, a ferocious backlash will be entirely appropriate.

James G. Long has been an army captain, a professional engineer, an author, and a blogger, with a lifelong interest in organizational management problems related to psychopathy. http://mandynamerica.com/blog