Warning: mysqli_free_result() expects parameter 1 to be mysqli_result, bool given in /var/www/html/americanthinker/admin/common/functions/func.general.php on line 126
 Tax Reform That Is Simple, Transparent, Fair - American Thinker
|

America's tax code is like a runaway train that is constantly fueled and loaded, even as it hurls down the tracks, with incomprehensible rules, regulations, and bureaucratic minutia.  This article explains how and where to reform our tax code.  In summary, we need to extend FICA (which contributes, in theory, to Social Security and to Medicare) to a pure flat tax: no ceiling; benefits and unearned income would be included in the base. The FICA rate should be raised from 15.3% to 20%. All Corporate Income Taxes and the Personal Income Taxes would be eliminated. These measures, as we will see, will raise more revenue than all the current income-based federal taxes combined.

Most discussions of the personal tax code quickly deteriorate into disagreements over the relative size of tax rates or brackets. But it is the definition of taxable income -- the tax base -- that drives the tax train.

Different rules for the same total earnings cause justifiable resentment.  There is a vast difference between actual income figures and taxable income figures. Special cases abound. There is the marriage penalty, gone today but maybe back tomorrow. There is the Alternative Minimum Tax (AMT), which is arguably the stupidest tax ever legislated in American history.  (Try figuring it out here.)  But there are also deductions for mortgage interest, charity, childcare credits, etc. Then there are rules for phasing out these deductions at higher incomes. The legendary complexity of the rules deters analysis of the tax burden and whether or not it is fair. The byzantine web of brackets, deductions, and disparate treatment of income serves mainly as a means of rewarding lobbyists and confounding debate.

It is as if no serious thought had ever gone into the rules. Then again, the rules came out of Congress and the IRS.

Based on the fiction that FICA somehow funds a pension plan and a medical insurance plan, discussions of the share of total tax paid by various groups of taxpayers often ignore FICA. One hears misleading statements like "The top 10% of taxpayers pay 70% of all income taxes."  But FICA is every bit as much a tax as the income tax.  FICA currently accounts for a third of annual federal revenue. That it is somehow earmarked for Social Security benefits does not negate the fact that FICA is a tax. Avoid it and you can go to jail.

Since they are levied on different bases, it is difficult to measure the combined effect of the income tax and the payroll tax. If the various deductions and exclusions which help to define the actual income tax base are ignored, and FICA and personal income tax are combined, it turns out that the total tax burden is fairly flat, with notable exceptions. It is displayed visually in Chart 1.

The most striking thing about Chart 1 is the bulge between $34,000 and $106,800, which affects most middle-class taxpayers. Is anyone offended that income up to $34,000 is taxed the same as income from $100,000 to $170,000? It flies in the face of fairness in a supposedly progressive tax code. Still, the current system, with its FICA component and income tax component is a surprisingly flat tax system. The injustice of the bulge in the bracket structure is even worse than it looks. Since FICA and Medicare are payroll taxes, few deductions apply, so that the deductions which reduce the impact of the higher brackets do little for lower bracket taxpayers. 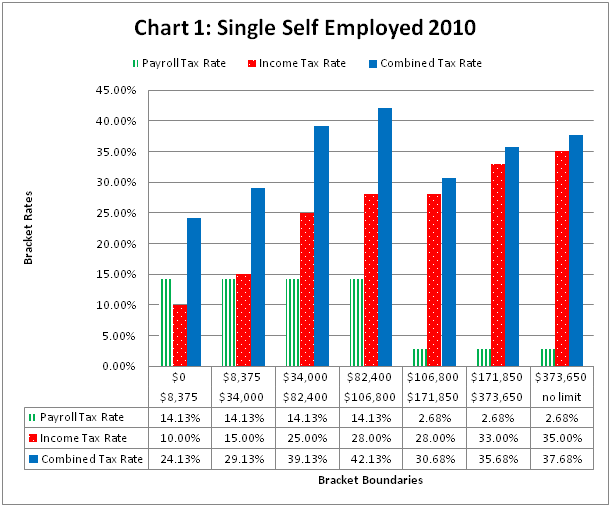 There are three major components of the earnings-based part of the tax code:

The OASDI base consists of all wages and salaries up to some ceiling, while the HI base has no ceiling. Each has its own rate. The entire FICA base also excludes unearned income (mainly interest, dividends, capital gains, and rents). The ceiling and these exclusions cause FICA to be a regressive tax. In theory, FICA revenues are held in a Trust Fund, but that amounts to little more than bookkeeping entries in the federal ledger.

The OMB posts the revenue raised by the major sections of the tax code. The figures below from the OMB website are for fiscal year 2010.

The potential tax base for earnings of individuals has three components:

It is necessary to have reliable numbers on which to base calculations. But dependable numbers are hard to find.  Sometimes, numbers are given with an unjustified air of precision. A more realistic goal is neither precise current figures nor bizarre long term projections.  It is better to use simple and transparent calculations with figures which are good enough for policy-making.

The HI base is a good proxy for earned income:

Statistics on unearned income are surprisingly difficult to tease out of the millions of numbers posted online by the Government. The best I could find are IRS spreadsheets for 2008 and 2009.  (See Table 1 or Table 1.4 for 2008 and 2009.)

Precise statistics on benefits are also difficult to pin down. The usual estimates of benefits are 30% to 40% of total compensation. That may include the employer share of FICA. (See Table A in the link.)

A conservative estimate of average benefits, excluding the employer share of FICA is 18% on top of earned income (diluted to account for the self-employed).

The numbers given here are only valid for FY 2010. The calculations are quite general. In PART 5, there is a spreadsheet. The tax base figures and the proposed tax rates can be modified. The tax revenue is calculated for the current code and a proposed new code with user-defined rates. Any proposed tax reform can be run through this template to see its broad impact. Table 1 only describes FY 2010, but a similar table exists for every past tax year. The OMB and CBO oracles claim to know it for future years too. But their techniques leave much to be desired.

Most of the benefit from the reforms that follow comes from eliminating complex and ambiguous taxable earnings calculations that serve to obscure analysis. While not perfect, the enhanced payroll tax base is a decent proxy for both personal and corporate earnings. Using a single flat rate completes the picture.

§  Benefits currently excluded from the FICA Base =$1.1T.

§  Unearned income currently excluded from the FICA Base = $2.2T.

Reform 1 may go against conservative temperament but it is only the first step.

The corporate tax code has evolved into a monstrosity.  Millions of words slice and dice the sources of income and the allowable expense deductions. It boils down to a set of rules for distinguishing taxable income from economic income. Its complexity is a testament to the ingenuity and persuasiveness of thousands of special interests.

Nominally, the rate is set at 35% of corporate profits, but in 2010 the amount collected was about 11% of reported true economic profits. As a share of income-based tax revenue, the corporate tax raised less than 10% of total taxes paid.  Costs of compliance are enormous. Surely the many billions of dollars spent on compliance could be put to more productive uses.

The international competitive issues involved with taxing corporate income of multinational companies are staggering. America has the highest nominal rate in the world. Imagine changing that to the lowest, while creating the simplest tax code in the world. Just stop taxing corporate income altogether.  Nothing could be simpler or more transparent.

After Reform 1, shareholders will be taxed on dividends and capital gains. There is no need to tax corporate profits. Eliminate the corporate tax entirely. All the associated record keeping, tax planning, foreign relocation, and other bad side effects will disappear. The benefit to the economy is hard to quantify precisely, but undoubtedly it would give our GDP a much needed multi trillion dollar shot in the arm.

The reality is that all corporate income is ultimately owned by some set of individuals. In the case of partnerships, subchapter S corporations, LLCs, and non-profits these may be owners or managers, but eventually all income can be allocated to people. With Reform 1 and Reform 2 together, the current FICA rate of 15.3% applied to the $9.5T Enhanced FICA Base raises revenue of around $1.45T.

Increase the 15.3% tax rate to 20% of the Enhanced FICA Base, split between employee and employer.

That increases the revenue to 20% of $9.5T, which is $1.9T. According to Table 1, that is exactly how much was raised by the current system in FY 2010, half of which came from the personal income tax.

The next reform may be the most popular political idea in a century.

Conservatives, who nearly passed out a few paragraphs ago, can now gaze on a flat tax landscape as far as the eye can see. Liberals may react harshly to the increase in the FICA rate, but should be pleased to see the ceiling removed and to see capital gains and dividends taxed at the same rate as hourly wages. Conservatives will be dismayed at losing the preferential rate on capital gains and dividends but pleased to end the double taxation problem.

Currently, the FICA tax burden is split between the employee and employer. The 20% rate (or any flat rate) can be split between employer and employee in various ways with no effect on tax revenue.  One way is an even split it at 10% apiece.  It might be more palatable to go 12% employer, 8% employee, but that is just a matter of perception.

The broadest income-driven tax base is the available revenue of a firm's owners and employees treated as a single unit. No matter how one allocates the taxes to employees and owners separately, only the after-tax shares are meaningful. The rest is semantics.

It may seem remarkable that merely applying the payroll tax to all income raises so much revenue. That is some measure of the impact of thousands of pages of loopholes. The simple explanation is that if a 20% rate is applied to a $10T base, it brings in $2T. What could be more transparent than that?

It would contradict the philosophy of the flat tax to reinstate any deductions.  But if it is necessary politically, some tax credits could be retained or even initiated. The (refundable) earned income tax credit currently costs Uncle Sam about $60B in annual revenue.  Retaining it would more than make up for the cost to lower income earners under the flat tax.  Tax credits for health insurance may make sense. A tax credit based on home equity (not home debt) could be a major hedge against recessions by encouraging low or no mortgage debt. These tax credits are outlays, rather than tax reductions, but in the end it makes no difference what they are called. No suggestion made here is likely to influence policy makers on the subject of tax credits, so no detailed recommendations are made. 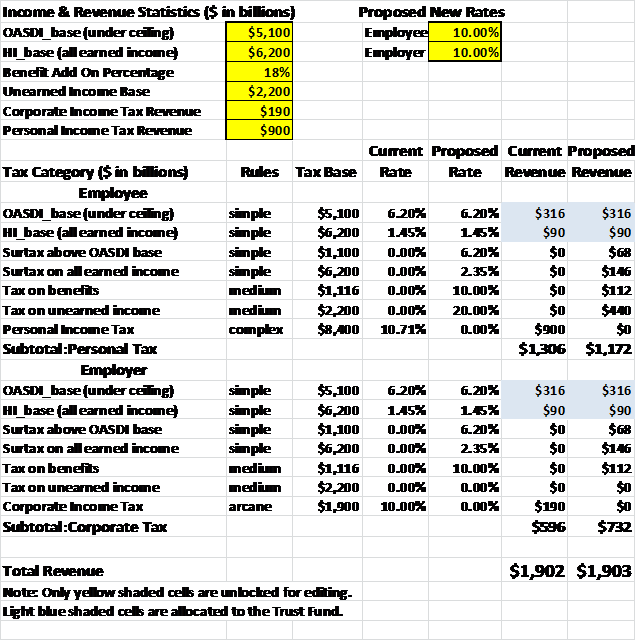 PART 6: Comparison to the Ryan Plan

It is difficult to be precise because the Ryan plan calls for unspecified changes in the exemption/deduction rules.  It seems to keep the same FICA structure and has a 10% bracket and a 25% bracket. It lowers the top corporate tax rate to 25%. It keeps a lower rate for long-term capital gains and dividends. Most people will pay 25% on an ambiguous base.

My plan has no personal income tax and no corporate income tax; the FICA base is expanded and the rate goes from 15.3% to 20%. It is dramatically simpler and fairer. It is harder for liberals to disparage because low income workers will not get an increase. Some high income earners may pay a little more, but there will be no tax planning needed. The economy will soar.