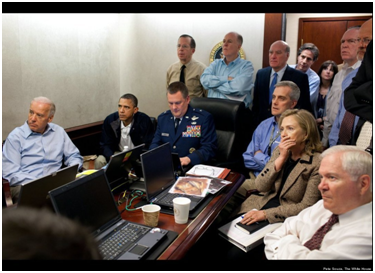 Recently, the MSM were shocked by the news that a girlfriend in Obama's Dreams book was a composite.  For many, such news comes as no surprise.  The concept of a composite presidency certainly comes as no shock as someone who participated as a contributor and authored evidence presented at Sheriff Joe Arpaio's press conference on Obama's long-form birth certificate report.  On the heels of these events -- and taking advantage of an anniversary of the bin Laden raid -- are recent campaign tactics to politicize the killing of Osama bin Laden.  With the re-emergence of another round of gutsy call faux heroism regarding Obama's decision, it may also be a good time to revisit the famous "Situation Room" photo released by the White House.  Is it Photoshopped?  Like everything else Obama does to make a political point, is the photo a composite as well?

Beyond the obvious blurred photo in front of Hillary Clinton, are there other hints of manipulation?  A Swedish paper makes the observation that Obama looks like a midget in the chair despite his six-foot-plus stature.  When comparing the size of the surrounding people in the photo to Obama, the photo certainly gives the impression that Obama's head (or possibly the entire body) was placed into the photo and resized a tad too small.  And as a side-note observation: why is everyone in the room dressed in work attire -- as if they went to work that day -- except for Obama?

Compare the size of surrounding heads in the "Situation Room" photo to the size of Obama's head.  Even if you use a perspective argument -- in which objects appear smaller at a greater distance -- then why are the faces behind Obama still larger?  Marshall Webb's head is larger as well, and keep in mind that Marshall is sitting next to Obama (on the same plane).

Referring back to the "Situation Room" photo again, look at the difference in head size between

Obama and Biden (in the "Situation Room" photo), and then contrast with differences in size from other photos found of Obama and Biden.  The height and head shapes are comparatively similar in size for the vast number of photos seen of the president and VP. 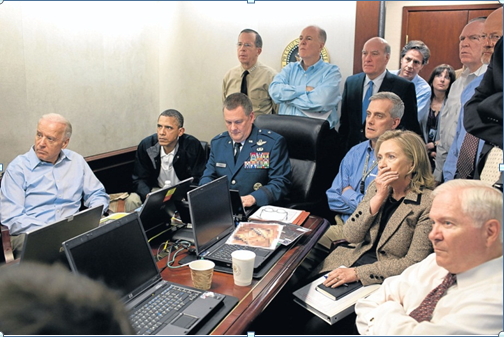 Another observation focuses (no pun intended) on the eyes of everyone in the room. A large and overexposed sharpened image of the "Situation Room" can be viewed here that offers a clear glimpse into the various pairs of eyes.  Follow the direction of the center of focus for all the surrounding faces in the room.  When zoomed in closely, the eyes are clear and detailed for many of these faces.  However, not only do Obama's eyes lack detail in this overexposed photo, but the direction of his glance appears to be

pinpointing a higher plane than that of 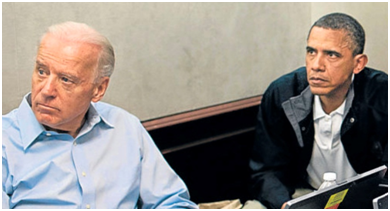 everyone else in the room.  It was reported here that the famous picture was taken not in the situation room, but rather from a smaller conference room next to the situation room.  A search for images of this conference room suggests that monitors are mounted on the wall just slightly above eye level when sitting -- which is consistent with the gaze level of the surrounding members in the photo.

Try this test: instead of zooming in close, try zooming out to a low level of the image, and notice a 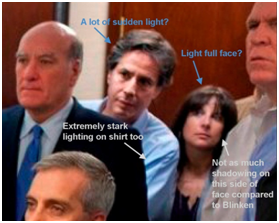 consistency in lighting and softness to the skin tones for the majority of faces in the room -- except for Obama, and two players standing behind Bill Daley.  Let me offer a few additional and possibly problematic observations on these two individuals standing in the back.  Their names are Anthony Blinken, national security advisor to Vice President Biden, and Audrey Tomason of the National Counterterrorism Center.  The Daily Beast speculates on the reasons for Tomason's presence in the photo as diversity balance so Hillary Clinton would not be the only woman in the room.

A similar observation could be made for the directional glance of the eyes for Blinken and Tomason, who appear to be glancing on a different vector path than the surrounding faces.  The lighting for these two individuals appears off when taking into account how the light falls on many of the other characters in this iconic photo. 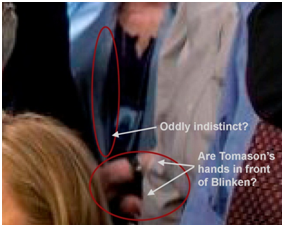 Judging by the light at the top of Bill Daley's head (who is standing in front of Blinken), it is possible that a light from overhead is glaring directly on top of Blinken.  Having said that, Blinken and Tomason seem to have a different set of rules regarding how the light falls on their faces compared to their co-workers.

In addition, when zooming in close to examine the shirt area of Blinken, there appears to be some indistinct areas for a shirt so 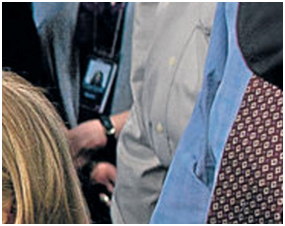 well-lit and strongly contrasted at the upper area of the torso.  It is hard to determine if this could be due to image-editing or normal shadowing and light falloff.

However, a few more questions to ponder in regard to Tomason: if Tomason is standing behind Blinken, why do her hands rest in front of Blinken's shirt?  And is there a watch on both wrists?

A close-up from the overexposed photo is also provided in which it is clearly visible that Tomason's hands are in front of Blinken's shirt and even appear to come out in front of Daley's jacket.  While the lack of detail could be natural due to Tomason's position in the photo, both arms seem to mutate into odd or unrecognizable hand shapes.

What do you think?  Photoshopped, or is my imagination simply on overload from too many composite stories emanating from the White House?

Mara Zebest is a graphic artist and co-author for a number of Adobe product books, including the Inside Photoshop series, which typically exceeded 1,000 pages and has been published in at least ten different languages around the world.  She is also tech editor for numerous books for both Adobe and Microsoft products and has worked closely with the Cold Case Posse (CCP) for the Maricopa County Sheriff's Office (MCSO) in providing evidence on Obama's forged birth certificate.