Warning: mysqli_free_result() expects parameter 1 to be mysqli_result, bool given in /var/www/html/americanthinker/admin/common/functions/func.general.php on line 126
 Marin County: Garden of Delusion - American Thinker
|

Marin County, California is connected to San Francisco by the Golden Gate Bridge. 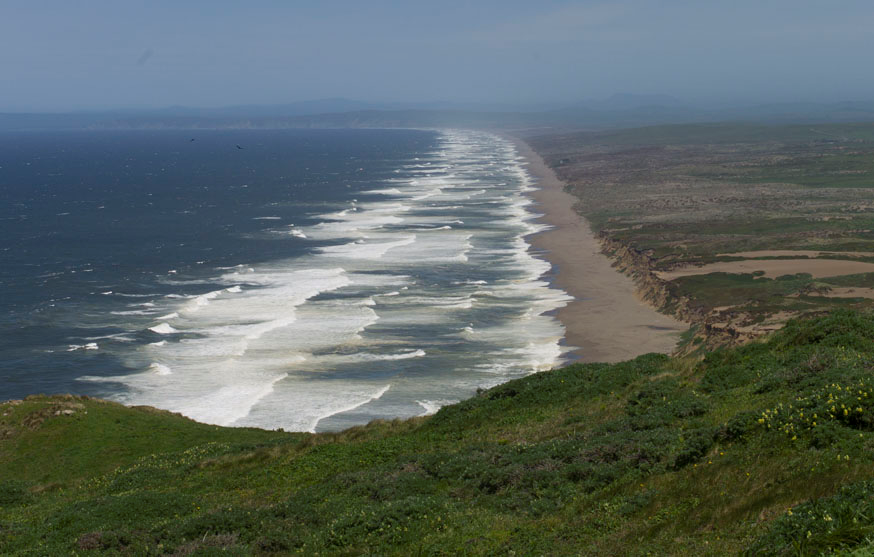 The population of Marin is overwhelmingly white, Democrat, and financially well-off.  In 2008, nearly 80% of the vote went to Obama.  The main minority consists of Spanish-speaking immigrants who prosper by providing services such as gardening, house-cleaning, and child care.  The going rate for babysitting is close to $20 an hour.  Although official statistics say that the Hispanics have low incomes, those statistics are based on the assumption that landscapers and babysitters, often in the country illegally, carefully report their earnings to the government.

Marin real estate fell by about 30% in the housing crash.  That means that an old and small house, not too far to commute to San Francisco, can now be purchased for $600,000 rather than $900,000.  Grander houses in Tiburon or Belvedere can easily run into the millions.

In Marin there are shared values, and it is expected that the residents will toe the line.  One of those shared values is a kind of make-believe tolerance.  The reality is that the inhabitants of Marin are just as conformist and narrow-minded as are the inhabitants of flyover small towns ridiculed by Hollywood or Ivy-League sociology professors.  Deviations from expectations will usually generate silent disapproval rather than verbal correction.  However, if you depart too far from expectations, you may experience vigorous disapproval. 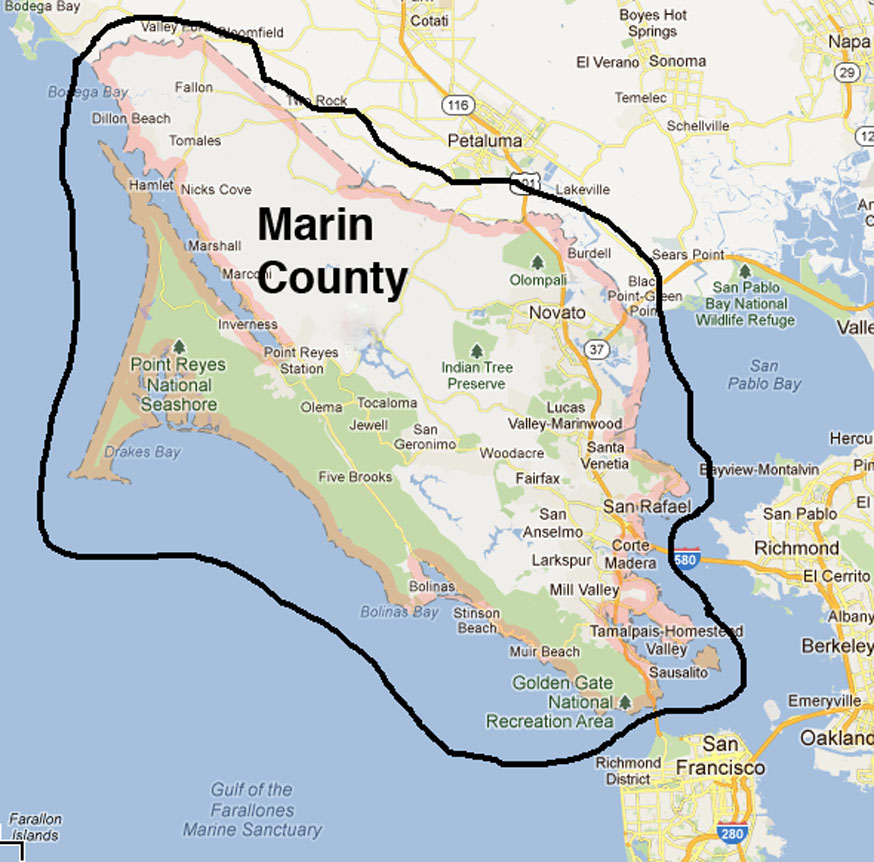 Plastic bags are politically incorrect in Marin, and various laws have been passed to force people to use paper bags or reusable cloth bags.  These bans are based on a superstitious dislike of plastic bags, as pointed out by the Save the Plastic Bag Coalition.

Marin residents tend to be older, with their formative years being the '60s and '70s.  As a result, balding men with ponytails are everywhere.  If they aren't riding bicycles, they are driving Priuses.

Marin political ideology is nominally progressive or liberal.  But for local issues, virulently reactionary politics is the norm.  It seems that the typical resident of Marin wants everything to remain exactly the same as it was on the day he moved to Marin.  A hilarious example of this was the 1977 water crisis.  A two-year drought caused the reservoirs to run nearly dry.  The situation was saved only by building an emergency pipeline that was run on the surface of the 6-mile-long Richmond San Rafael Bridge to bring in water from water agencies that had better planning or weren't suffering from political opposition to everything new.  Thirty-five years later, the problem still exists, and the water district is still proposing solutions that are shot down by anti-development Marin people.

Many years ago, the electric company needed to build a new power line.  For whatever reason, this created a storm of protest on the grounds that power line towers are ugly.  To pacify the locals, an entirely new type of power line tower was designed (see photo). 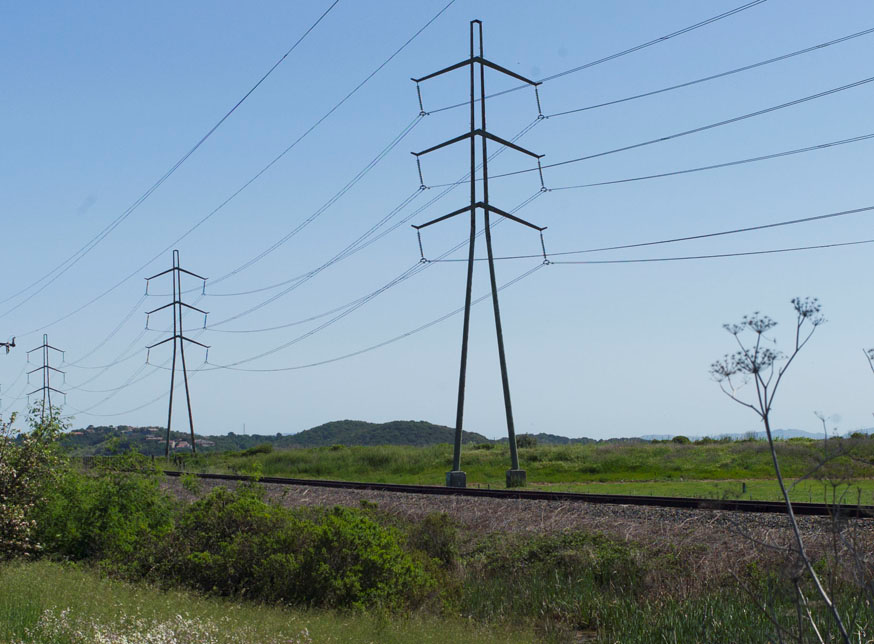 Recently, a hysterical movement has developed to stop the electric company from installing meters that communicate by radio and thus eliminate the need for meter readers.  The opponents of the so-called smart meters are not worried about the meter-readers who might lose their jobs.  They've become convinced, against all scientific evidence, that the radio waves emanating from the meters will make people sick.  One wonders if these same people spend time chatting on cellphones.

In the community of Mill Valley in 2011, a plot of land was dug up with heavy equipment, and sprinklers were installed to create an artificial wetland. 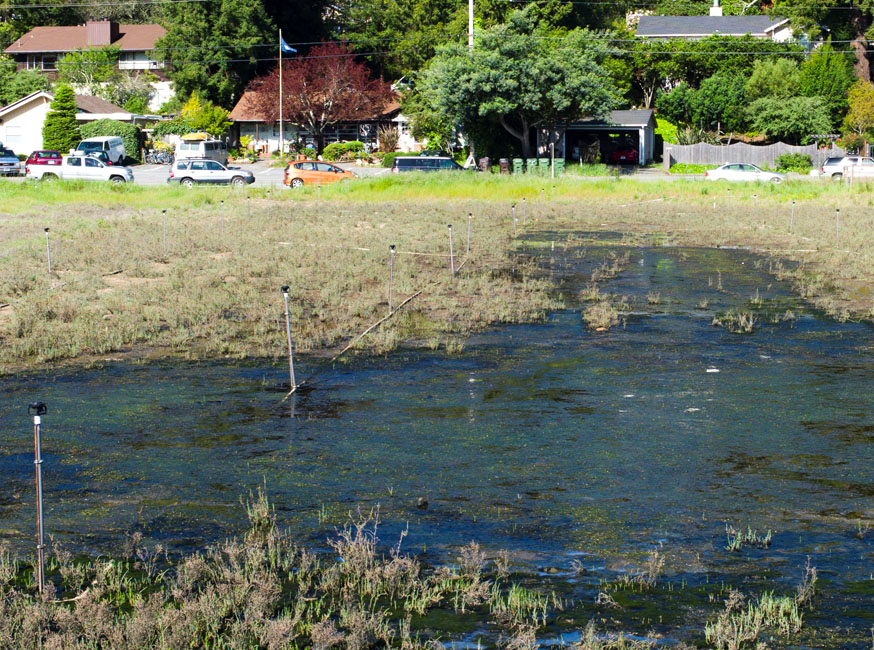 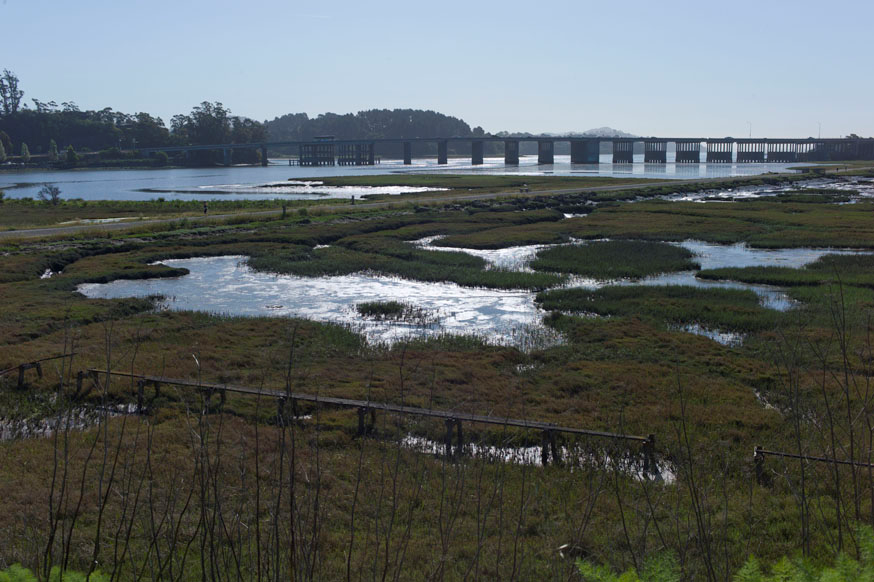 The Marin Community Foundation was founded with $10 million from the estate of longtime Marin residents Leonard and Beryl H. Buck.  The original trustees tried to break the will so as to be able to spend the money outside Marin County.  While the lengthy legal battle took place, good investment luck greatly increased the value of the estate.  The original trustees failed to break the will, and now the foundation has $1 billion devoted to projects in Marin County.  The projects undertaken by the foundation are well-synchronized with the thinking of Marin residents.  That is to say, the estate's endeavors are heavily weighted to feel-good projects ranging from dubious to crackpot.  The strategic initiatives of the foundation comprise improving education for people of color, providing low-income housing and breaking the cycle of poverty -- within Marin County.  Marin County has an average per capita money income of $53,000 and a median home value of $868,000.  The official poverty level is 7%, half the California average.  Of course, the official poverty level has little to do with real poverty.  Promoting low-income housing in Marin County is guaranteed to meet massive opposition.  Even high-income housing is a no-no.

The foundation, to be fashionable, had to find a way to fight global warming in Marin County.  So, they are spending $10 million to research absorption of carbon dioxide by Marin rangelands.  Like most of these charitable organizations, the real beneficiaries of the foundation's projects are the highly educated people who are good grant-writers and the employees of the foundation.  The Spanish-speaking babysitters will continue earning $20 an hour and are unlikely to be touched by anything the foundation does.

George Lucas, the creator of the Star Wars films, has a reputed net worth of $3.2 billion and may be the richest resident of Marin County.  Lucas's company, Lucasfilm, already has a large facility in rural Marin that was developed with impeccable environmental attributes.  They wanted to add a new facility that would provide excellent high-tech jobs and be totally a model project.  In Marin, none of this matters.  Lucas, after years of red tape, finally gave up, saying that he would prefer to go to a location where his company isn't seen as an evil empire.  As a parting shot, Lucasfilm said that it hoped to sell the property to a developer who would develop low-income housing.  That would obviously be payback to the area residents who relentlessly blocked his project.  Marin interest in low-income housing is insincere, to say the least.

George Lucas grew up in Modesto, California.  His parents had a stationery store and lived on a walnut ranch.  He started college at Modesto Junior College.  This background is different from that of many of the movers and shakers of Marin County who are voting for Obama.  Think Stanford; think trust funds.

Charles Murray, in his new book Coming Apart, points out that a new social class has been created due to the greater economic value of brains, a consequence of the impact of new technology.  These workers tend to be in the high-tech industry or the financial industry.  They have a privileged position and are isolated from the rest of America.  They tend to marry each other, and they cluster in certain places like Marin County.  Because their skills are in great demand, they are unacquainted with economic hardship.  The idea that, for example, environmental goals have to be compromised for economic goals is foreign to them because such difficult compromises are not something they have had to face in their personal lives.  Since they have led such charmed lives, they see no reason why everyone can't have similar advantages.  So Obama's message that he is going to fix everything resonates with them.  Many members of this new class went to universities where doctrinaire and anti-capitalist ideology is rampant.  Thus, they lack historical perspective, or even basic historical knowledge.

Norman Rogers is a senior policy advisor at the Heartland Institute, a Midwest think-tank.  He maintains a personal website.