Warning: mysqli_free_result() expects parameter 1 to be mysqli_result, bool given in /var/www/html/americanthinker/admin/common/functions/func.general.php on line 126
 Here Comes the Made-in-China Cadillac - American Thinker
|

It's déjà vu all over again!  GM again caves to Chinese pressure.  In September it was the electric car.  In April it was the Cadillac.

The Chinese government made its latest move in December.  That's when The Guardian reported that the Chinese government raised its already high 25% tariff upon American-made vehicles, concerned that increasing numbers of big-engine cars were being purchased by Chinese consumers:

General Motors faces the greatest impact, almost 22% extra on some sports utility vehicles (SUVs) and other cars with engine capacities above 2.5 litres. Chrysler faces a 15% penalty, while a 2% levy will be imposed on BMW, whose US plants make many of the cars it exports to China.

Existing taxes and duties already push up the cost of US imports by 25%, and the new levies make it even more expensive for Chinese consumers to buy American.

Now we learn what they were after.  In a May 2 Huffington Post commentary ("Commies in Cadillacs: GM Turns Chinese"), economists Peter Navarro and Greg Autrey reported that GM will build its luxury cars in China instead of exporting them to China.  They began:

General Motors announced this week that it will start building the Cadillac XTS, CTS and ATX in China in an attempt to keep up with the insatiable demand for luxury consumption by that nation's nominally Marxist elite. It seems that Communist Party princelings and their crony capitalist clients just can't get enough Caddies, not to mention the BMWs, Ferraris and Lamborghinis.

This will be a joint venture with SAIC, the company that owns 51% of GM's China business.  The announcement of the new factories was made by the vice president of GM China at a Beijing auto show on April 23.  Valuewalk.com reports:

In 2012, GM will build the new 2013 Cadillac XTS sedan in China, followed by the ELR luxury electric coupe.

Currently, China is only selling one model, the large-length luxury sedan, the Cadillac SLS; it is built in the country while it imports the CTS, SRX crossover and Escalade from U.S. and Mexico plants, reported The Detroit News.

Nine months ago, the same scenario played out even more quickly.  On September 16, the Wall Street Journal reported ("Road Gets Bumpy for GM in China") that the Chinese government was pressuring GM to give away its proprietary electric car technology.  At that point, GM was refusing.  Here's a selection:

GM would like to bring its Volt electric car into China. But Chief Executive Dan Akerson said he refuses to share electric-car technology in exchange for hefty consumer rebates from the Chinese government that would juice sales of the vehicle.

Just one week later, on September 22, the NY Times reported ("GM to develop electric cars with Chinese automaker") that GM had caved to the Chinese government demand:

HONG KONG: General Motors said Tuesday that it would develop electric cars in China through a joint venture with a Chinese automaker [SAIC], and would transfer battery and other electric car technology to the venture.

As a condition for doing business in China, the Chinese government requires that GM share its made-in-America technologies with SAIC, which is both its Chinese partner and its competitor.  Back in 2009, Bloomberg reported ("GM Set for 'Harder Life' in China as Partner SAIC Adds Models") that SAIC is already using GM's technology to produce cars for the Chinese market, outside its partnership with GM.  In February, SAIC got GM's electric car technology.  In April, SAIC got GM's Cadillac technology.

The reason is simple.  Manufacturers know that, under the current system, they can produce in China and sell to the United States, but they will not be allowed to produce in the United States and sell to China -- all because the Obama administration does not have the intelligence or will to invoke the WTO rule for trade-deficit countries invoked by President Nixon on August 15, 1971, when he imposed an across-the-board 10% tariff which balanced U.S. trade by 1973.

If President Obama invoked Nixon's WTO rule, he could demand trade reciprocity (we buy your products; you buy ours).  He could impose a trade-balancing scaled tariff upon imports from all the countries with which the U.S. has a trade deficit.  Such a tariff would go up when the U.S. trade deficit with a country goes up, go down when it goes down, and disappear when trade with that country approaches balance.

Then GM would be able to produce its Cadillacs and Volts in America and export them to China.  It could preserve its inventions for its own use, instead of having to give them to its Chinese competitor.  Not only that, but with increased manufacturing investment, the U.S. economy could start growing rapidly again.

On May 3 and 4, Obama's Secretary of State Clinton and Treasury Secretary Geithner traveled to Beijing to beg for a more level playing field for American trade and investment.  (Even sacrificing a Chinese dissident, who sought refuge in our embassy, in order to show our goodwill to China!)

In his closing remarks, Geithner pretended that our economic trade relationship with China is improving.  He said:

We have made significant progress on the economic front since early 2009. U.S. exports have almost doubled. The Chinese currency has appreciated significantly. China's trade surplus has fallen substantially.

It is true, as Geithner claims, that U.S. exports to China have risen, but U.S. imports from China have risen much more rapidly.  For the past 25 consecutive months, U.S. net exports (exports minus imports) of goods with China have fallen steadily, subtracting more and more from U.S. GDP and income.  Even in February, when China ran a temporary trade deficit with the rest of the world, United States net exports to China declined, as shown in the graph below: 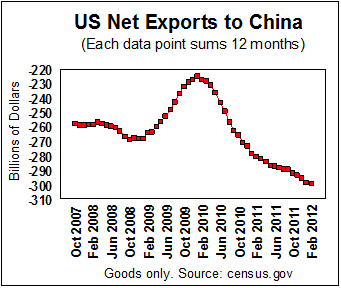 Although China is reducing its overall trade surpluses, it is increasing its trade surpluses with the United States.  Is this coincidence or deliberate Chinese policy?  If the latter, it raises the possibility -- nay, the probability -- that China is using trade to acquire economic and military power for itself and to bring down the economic power of the United States.

Republican presidential candidate Mitt Romney plans to change our trade relationship with China.  As we reported after reading his 2010 book ("Romney's Theory about Why Companies and Countries Decline"), he is intent upon meeting the economic and political challenges that the United States faces from its competitors.  The following statement on his website summarizes Romney's current trade position regarding China:

China presents a broad set of problems that cry out urgently for solutions. It is time to end the Obama administration's acquiescence to the one-way arrangements the Chinese have come to enjoy. We need a fresh and fearless approach to that trade relationship. Our first priority must be to put on the table all unilateral actions within our power to ensure that the Chinese adhere to existing agreements. Anyone with business experience knows that you can succeed in a negotiation only if you are willing to walk away. If we want the Chinese to play by the rules, we must be willing to say "no more" to a relationship that too often benefits them and harms us.

Under President Obama, our trade relationship with China has deteriorated steadily.  American manufacturers know that, with Obama as president, they can produce in China and sell to the United States, but they will not be allowed to produce in the United States and sell to China.  Romney will demand at least some reciprocity from China.  He could not do worse than Obama.

The authors maintain a blog at www.idealtaxes.com and co-authored the 2008 book Trading Away Our Future: How to Fix Our Government-Driven Trade Deficits and Faulty Tax System Before it's Too Late, published by Ideal Taxes Association.