Warning: mysqli_free_result() expects parameter 1 to be mysqli_result, bool given in /var/www/html/americanthinker/admin/common/functions/func.general.php on line 126
 Grown-Ups, Take the Wheel - American Thinker
|

Ever wonder why conversations with adults often leave you feeling like you were arguing with teenagers? Take heart, you're not alone: author Diana West, in her brilliant book, The Death of the Grown-Up:  How America's Arrested Development is Bringing Down Western Civilization, explains how and why America has become a nation overrun by adolescent minds disguised as mature adults.

Although West makes numerous compelling and superbly crafted observations, she intentionally offered no specific conclusions as to the impact of her thesis in the realm of politics, stating: "I'll 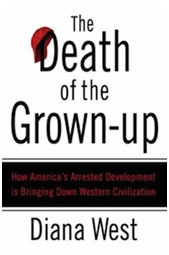 Like the analogy of the kindergarten election where one candidate offers free ice cream in exchange for votes and the other valiantly campaigns on serious issues, the ice cream wins. Obama's enticing "blank slate" flavors, labeled with catchy bumper-sticker slogans, were full of hopey-changey ripples and fair-share chunks, served up in an unvetted waffling cone.

The problem for Obama, though, this time around, is that his concoction has melted into a sticky economic goo, and the media-protected cone of his narrative is starting to crumble.  Not to worry, says Obama, urging his troops: "Forward!" while his straw men pass out napkins, blaming Bush and those nasty Republicans for the mess and offering yet more distracting delights in newly packaged flavors.  The poor attendance at Obama's campaign kickoff in Ohio, however, may be a sign that the crowd's tummies are feeling the need for more than sweets.

It remains the job of party-pooper grown-ups to save the day: to truthfully evaluate the situation, take steps to clean up, and formulate solutions to prevent a recurrence.

Writing in American Thinker, Steven Plaut described the "Stupid Left" and "Satanic Left."  I won't address the satanic part here, but it does seem that more than just stupidity creates ice-cream voters on both sides of the political aisle: the kind of mental immaturity West describes.

Entrenched notions of moral and cultural relativism and relative truth have manifested into a mushy, adolescent thoughtlessness -- a superficial reasoning justified by chin-raised assertions of tolerance and "coexistence" -- an intellectual laziness wrapped in the deceptive guise of "multiculturalism" and "inclusiveness," reinforced by society's lack of barriers and boundaries and "embrace of nonjudgmentalism that create[s] a cocoon of unreality." [ii]

Such ideas have infected and arrested the mental maturation of adults in both political parties.  Lately it seems the only major differences between party platforms relate to economic philosophy, with both Democrats and Republicans tiptoeing around implications of societal or cultural issues. Many Republicans have mothballed traditions that once defined The Conservative Mind and describe themselves as "economically conservative, socially liberal" -- which often seems to translate into a rather childish "I just want to keep what's mine" combined with a "whatever" on everything else.  West warns, however, that much more than a healthy economy is at stake:  Western civilization -- with its Judeo-Christian foundation and hallmarks of "liberty, prosperity, and human rights."

"Authority and reason," argues West, have given way to "novelty and feelings."  Youthful minds assert "I feel, therefore I am moral," creating an "ersatz morality." [iii] Emotional appeals, such as Biden's "who you love," sound more like lyrics to a rap song instead of a trailhead marking the slippery slope away from a thousands-year-old foundation of Western culture. Obama's new pro-gay-marriage rainbow, besides yielding a huge pot-o-gold from mega-donors, was drawn to encourage young voters to the polls -- with the revelation that his evolutionary views were shaped by recent conversations with his teenage daughters.

Isn't that admission remarkable -- that adults find it noteworthy or admirable to ask youngsters for advice, or seriously entertain their opinions on culture or politics?  West analyzed the turning point in America's history, beginning in the 1950's, when adults began "orbiting around their children, rather than the other way around" [iv] and were "suddenly looking to those same children not only for guidance but also approval." [v]

Bristol Palin noted the implications of Obama's remarks, according to ABC News:

In a blog posted Thursday, Palin criticized the president for consulting his "teenage daughters" - emphasizing the word "teenage" - when making "a massive change in a policy position that could affect the entire nation."

"I guess we can be glad that Malia and Sasha aren't younger, or perhaps today's press conference might have been about appointing Dora the Explorer as Attorney General because of her success in stopping Swiper the Fox," Palin wrote.

Teens naturally object to restraints on anything that feels good or makes them happy at the moment, so it's not surprising that similarly immature adults consistently warn grown-up conservatives to steer clear of social issues -- at least those they might say "No" to.  The Democrat's "Yes" (and the GOP's "no comment") is always music to the ears, and academia and the mainstream media reassure society that objections, limitations or discipline are "simplistic, naïve, irrelevant, and out-of-date." [vi]

West referred to anthropologist Margaret Mead who described the "abdication of the adult":  "When mothers cease to say, 'When I was a girl, I was not allowed...' and substitute the question, 'What are the other girls doing?' something fundamental has happened to the culture." [v]

Peer approval greatly influences immature minds.  It's the juvenile thinkers that call others names like "racist" and "birther" (and are especially fearful of being called such names themselves), protest with actual sticks and stones, and bully those who don't agree with them.  Gray-haired ponytail types dominate college campuses, teaching groupthink to the next generation.  Wrinkled fans esteem botoxed rock stars as political gurus, who twitter wisdom like: "If ROMNEY gets elected I don't know if i can breathe same air as Him & his Right Wing Racist Homophobic Women Hating Tea Bagger Masters."

Perpetual adolescents also feel entitled to believe that the world revolves around them instead of truth and reality.  "Our first adolescent president" [vii] exemplified the value that lies are only bad when caught, and even then, supposedly grown-up Republicans accommodated childish arguments over the meaning of simple words and allowed Clinton to walk away unscathed. Incapable of rationally debating with adults, juvenile minds tend to react with emotional comebacks:  "So why do you hate me?!"  Sound familiar?

Saying "no" to children elicits the same responses as saying "no" in politics.  And when conservatives say "no," their views are characterized as a "vast right-wing conspiracy," "hate," a "war against women," or flat-earth thinking.

Even the anti-war crowd backs a Prez who sends soldiers to fight unsanctioned wars or deploys killer drones like a Nerf-shooter, because inconsistency has never been an issue with kids -- unless it can be used as a weapon against adults, as in: "But you never objected before, why this time?" when the straw finally breaks the camel's back.

In the Teen Fiction section, next to books on vampires and hooking up, sits the Obama narrative, full of composite characters and "compression" and wrapped in glowing bookjackets supplied by the mainstream media (and awkwardly avoided by the GOP establishment).  Noemie Emery outlined the fiction of the Obama's "alternative universe, in which much is asserted and nothing proved...based not on what has happened, but what could, would or might have occurred under different conditions, which he is allowed to make up."

An alternate universe where "the economy is just fine and the most pressing issues on voters' minds is whether Billy can marry Bob and if women can get someone else to pay for their birth control" was described by columnist Mike Flynn.

But are these social issues merely distractions intentionally aimed at perpetual adolescents and away from Obama's economic failures? The "democratization of vice" and "sexual shamelessness and unconstrained passions that...would make democracy unworkable" were examined by West in an essay by professor Mary Ann Glendon: "When regime-threatening questions might come to mind, the oligarchs have authorized a modern form of bread and circuses, an array of new sexual freedoms to compensate for the loss of the most basic civil right of all -- the right of self-government." [viii]

Mark Steyn, bravely detailing the perils of being Geert Wilders, had this to say regarding licentiousness in exchange for freedom:  "In 21st-century Amsterdam, you're free to smoke marijuana and pick out a half-naked sex partner from the front window of her shop. But you can be put on trial for holding the wrong opinion about a bloke who died in the seventh century."

West warns:  "[T]here are alarming similarities between dhimmi life under Islam and PC life in a multicultural world.  We have long lived in a self-censoring society, stunted by a kind of fear of political correctness," which helps explain the "seamless compatibility between dhimmitude and the multicultural mind-set that flourishes in a post-grown-up world." [ix]

Has a collective fear of political correctness, on both sides of the aisle, turned into a collectively immature mentality that may ultimately destroy individual freedom, and result in a kind of (if not actual) dhimmitude?

It is interesting to note that Obama's recent distractions relate to Glendon's "compensating" "array of sexual freedoms."  Perhaps Obama's "bread and circuses" and the GOP's insistence on redirecting the focus back on the economy both divert attention from the most important issue:  the very real erosion of the right to self-government. And further, as West painfully documents, the monumental question becomes whether our society as a whole, having discarded virtue for "values," [x] remains capable of governing itself.

Tocqueville warned of the nanny state and the power of despotism as resembling "parental authority if, fatherlike, it tried to prepare its charges for a man's life but on the contrary, it only tries to keep them in perpetual childhood." [xi]

Grown-ups see beyond the distractions and are despised by those who, as Robert Knight noted, "openly wish their opponents were dead. In the Washington Post, the far-left cartoonist Tom Toles showed a man holding a book in front of two men. He says, 'If anyone here objects to the marriage of these two men, speak up now because opponents are aging and dying off and soon won't matter anymore.' In the lower right corner, a man at a desk says, 'Is it okay to yell "hurry up"?'"

Restless and tired of "austerity," France elected the ice cream socialist who promised to expand, as Thomas Lifson described, "the welfare state even beyond the generous cradle to grave cocoon in which the French state lovingly wraps its citizens." While the majority apparently voted in "favor of heading straight for the fiscal cliff, pedal to the metal," wealthy French citizens are planning to get off the bus and head elsewhere, leaving the kids behind to ultimately realize (to paraphrase Margaret Thatcher):  Socialism is great until daddy's wallet is empty, he moves away, or he can no longer provide because Toles et al urged him to hurry up and die -- and take his old-fashioned ideas with him.

To paraphrase West:  Grown-ups must put an end to being taken for a ride by the kids in the backseat [v], and station real adults behind the wheel of our government. More than "stand athwart history, yelling stop" -- we must shift -- not always into "forward," but even reverse at times, to find our way back to the road that leads to the shining city on the hill.

[i] Diana West, The Death of the Grown-Up:  How America's Arrested Development is Bringing Down Western Civilization (New York, St. Martin's Press, 2007), page 215