Warning: mysqli_free_result() expects parameter 1 to be mysqli_result, bool given in /var/www/html/americanthinker/admin/common/functions/func.general.php on line 126
 Global Warming Melts Away - American Thinker
|

Wondering where things stand on global warming?  Let's go to the science of it.  And by "science" I mean physical observations.  Nothing complicated.  What do thermometers say?  What's happening with polar ice caps?  And carbon dioxide?

In the following analysis I use publicly available data as provided by government scientists at places like NASA, the U.K. Met office, and NOAA.  This is the data we're told to use and trust.  I'm using it and trusting it.

Measured Temperatures.  The two charts below show recent global temperatures (NASA/GISS data) in units of hundredths of a degree above the 1951-1980 average.  The lines are linear regression trends for the extent shown.  March 2012 was the most recent month of data at the time of writing. 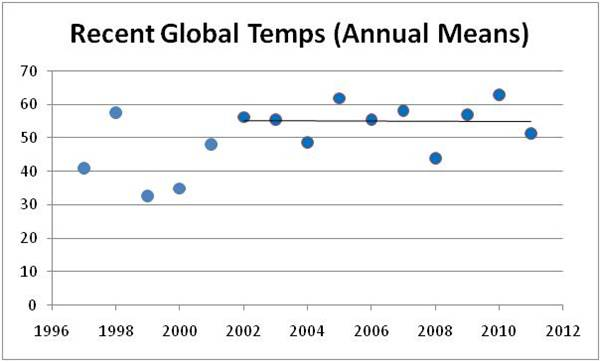 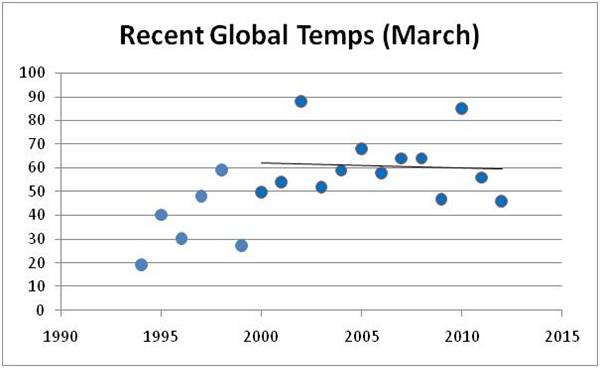 Similar observations can be drawn from Hadley Center data from the U.K., which goes back to 1850. 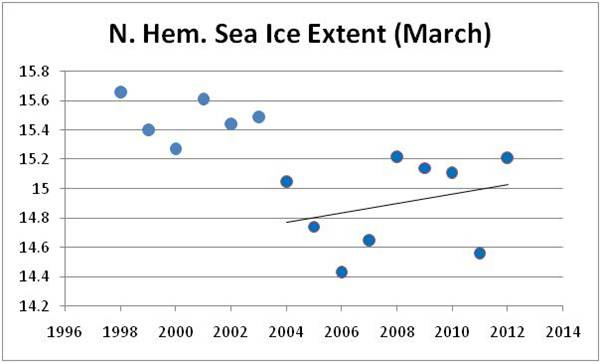 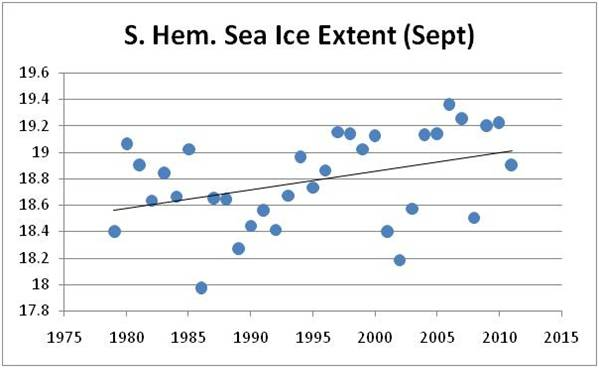 Southern Hemisphere winter sea ice extent has grown over all the 32 years that satellites have been measuring it.  And that growth is statistically significant.

The chart below shows total global sea ice, north and south, over the whole time that satellites have been measuring it.  There is not now, nor has there ever been, any apparent alarming trend in either direction in the amount of sea ice on our planet in that time.  The latest measurements put the amount of sea ice a bit above the 1979-2008 average.

Correlating Temperature and CO2.  The chart below shows global temperatures vs. measured atmospheric CO2.  The data cover the years from 1959 through 2011.  The correlation between CO2 and temperature is clear to the eye.  The calculated correlation coefficient is 0.91. 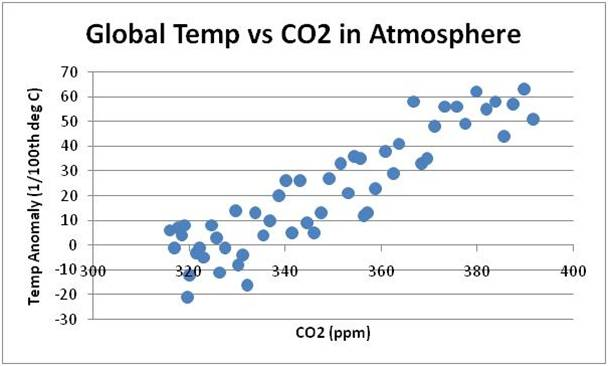 For example, here is another chart: global temperature anomaly vs. federal debt (in millions of dollars). 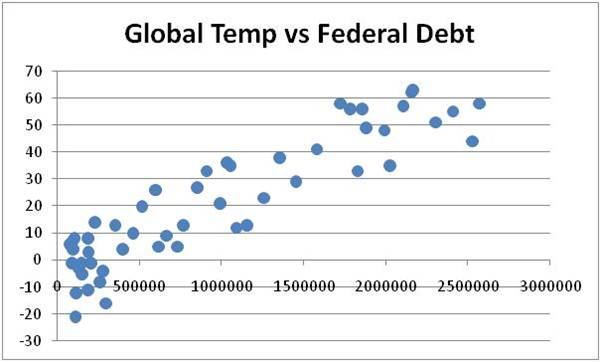 Even if you believe in the correlation-is-causation theory, that correlation has broken down recently.  Look at the chart below.  It shows that the correlation between CO2 and temperature has entirely disappeared in the last decade.  In fact, the correlation is negative since 2002. 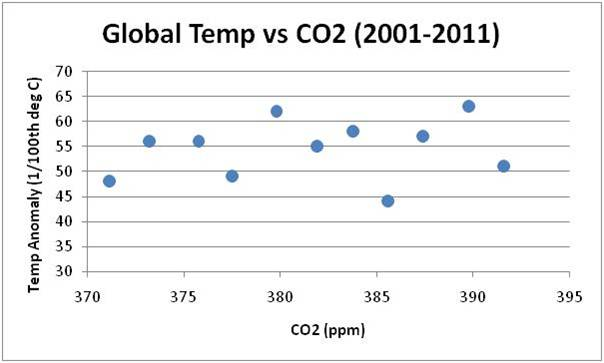 What the data show.  Whether you think the globe is getting warmer or not largely depends on your timeframe.  If your timeframe is the entire time that modern temperature records have been kept, meaning since the 19th century, then the trend is indeed warming: about half a degree Celsius (about one degree Fahrenheit) per century.  That is less than the difference in average July temperatures between Cape Hatteras and Charlotte, NC, for example.

If your time frame is more recent, like the last 15 years, then no warming can be detected.  In fact, the trend has been cooling for about the last dozen years.  This is apparent in NASA's data, the U.K.'s Met Office data, and measurements of both Arctic and Antarctic sea ice.  Indeed, Antarctic sea ice has been growing for the 32 years since satellite measurements have been available.

In short, the data show nothing alarming at all: very mild warming over the long term, and actual cooling over the short term.

Please look at just one more chart, below.  That chart is the global temperature anomaly as provided by the Hadley Center.  Usually you might see it plotted on a scale that spans about one degree Celsius, making the trend look alarming.  On this chart I chose the total vertical scale to match the difference in average June temperatures between Flagstaff and Yuma, Arizona (about 16 deg C). 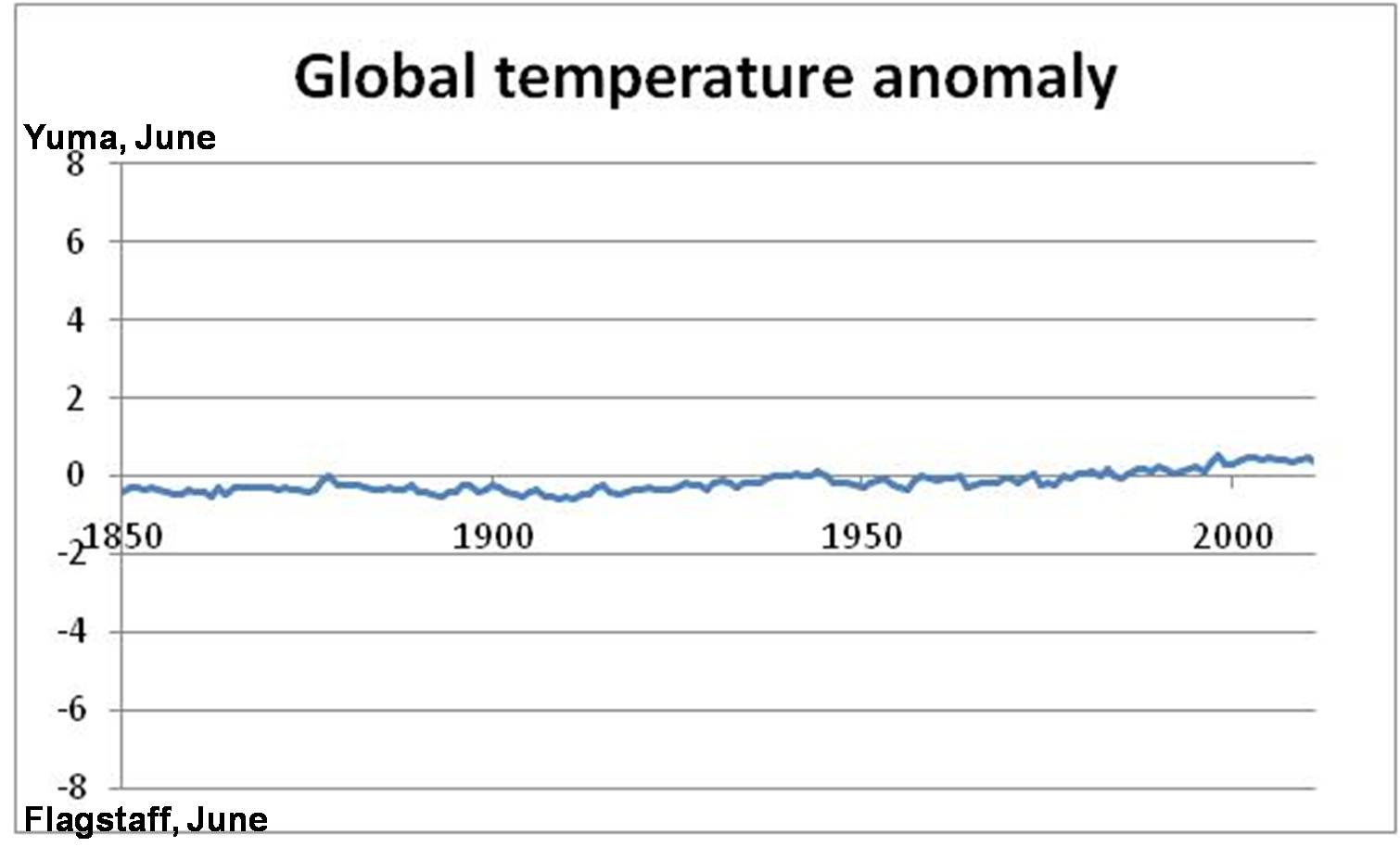 Does it strike you as just a bit odd that the data of this chart causes so much fuss?

(2) Hadley Center of the UK Met Office data is available at http://www.cru.uea.ac.uk/cru/data/temperature.  I used the HadCRUT3 global (GL) product.

(3) Sea ice data from the National Oceanic and Atmospheric Administration (NOAA) is available via the University of Colorado here: ftp://sidads.colorado.edu/DATASETS/NOAA/G02135.  I used the peak winter month for both poles: March for north (N_03_area.txt) and September for south (S_09_area.txt).

(4) The chart of total global sea ice is available from the University of Illinois here: http://arctic.atmos.uiuc.edu/cryosphere/IMAGES/global.daily.ice.area.withtrend.jpg.  The website of the Polar Research Group in the Department of Atmospheric Sciences at the University of Illinois is available here: http://arctic.atmos.uiuc.edu/cryosphere.

(6) Daily mean temperatures for each month for several U.S. cities is available from NOAA here: http://www.ncdc.noaa.gov/oa/climate/online/ccd/meantemp.html.