There has been some interesting commentary in the conservative media regarding the new Obama campaign slogan for 2012: "Forward!" The slogan debuted on April 30 -- May Day eve -- in a seven-minute video by the Obama campaign, with the "O" in "Forward!" familiarly styled upon the Obama logo.

Conservatives have noted the communist/socialist roots of the slogan. It began with an article in the Washington Times by Victor Morton, titled, "New Obama slogan has long ties to Marxism, socialism." The article noted that "Forward!" has a "long and rich association" with Marxism: "Many Communist and radical publications and entities throughout the 19th and 20th centuries had the name 'Forward!' or its foreign cognates." The article noted that even Wikipedia "has an entire section called 'Forward (generic name of socialist publications).'"

The Washington Times piece was posted by Drudge, which crafted some choice artwork portraying Obama in Lenin-like imagery. From there, it went viral, with others investigating. Jeffrey Lord in American Spectator noted Mao's infamous call for his Great Leap Forward.

Being that this is my area of research, I naturally paused to consider this bizarre spectacle. I contacted Ion Mihai Pacepa, a goldmine of information on this sort of thing.  Pacepa, now in his 80s, was the highest-ranking intelligence official to defect the Soviet bloc.  He had been the right-hand man to Romanian dictator Nicolai Ceausescu.  When he defected in 1978, Pacepa's positions included being head of Romania's so-called "Presidential House," which was equivalent to being White House chief of staff and director of the CIA, FBI, and Department of Homeland Security. 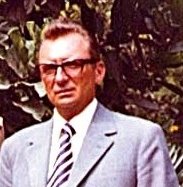 Pacepa knows the communist world better than just about anyone on the planet. Here's what he told me about the "Forward!" slogan:

Forward," rooted in Lenin's book Two Steps Backwards, One Step Forward, was frequently used by most leaders of the Soviet bloc I met. "Forward Comrades" was one of Ceausecu's favorite slogans. In 1972, when I had my last meeting with Fidel, he also used it many times. Raul did too.... Look also into Vorwärts (German for Forward), which was the newspaper of the Social Democratic Party of Germany.

But has Obama -- and his chief strategist and image-maker, David Axelrod -- deliberately tapped a communist slogan, or was this mere accident? 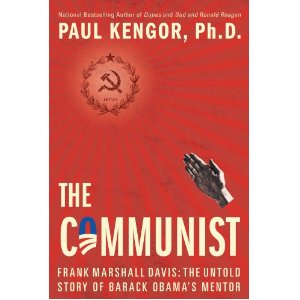 Well, I investigated another crucial angle. I've just completed a book on Obama's mentor, Frank Marshall Davis, set for release in July, titled The Communist: Frank Marshall Davis, the Untold Story of Barack Obama's Mentor. In my research, I read about 500 pages of the Chicago Star, the Communist Party USA (CPUSA) newspaper for Chicago from 1946-48. The founding editor-in-chief for the Star was Frank Marshall Davis. These pages are unflaggingly pro-Soviet. From line to line and page to page, they unflinchingly toe the CPUSA/Soviet line.

I went back to the Star last week to look for uses of "Forward!" I found a front-page example from (appropriately) the May Day issue for 1948. (Click here for full page image.) It's a quote from an old socialist named August Spies: 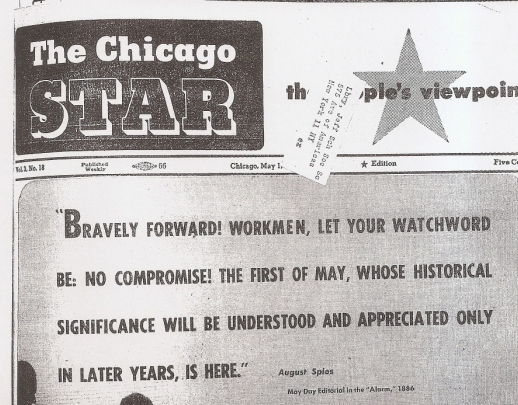 "BRAVELY FORWARD! WORKMEN, LET YOUR WATCHWORD BE: NO COMPROMISE! THE FIRST OF MAY, WHOSE HISTORICAL SIGNIFICANCE WILL BE UNDERSTOOD AND APPRECIATED ONLY IN LATER YEARS, IS HERE."

Frank Marshall Davis did absolutely everything for the Star, from writing text to headlines to layout, and no doubt would have been the Star staffer (there weren't many) who thrust this quote onto the front page.

As I continued to look back through my research, I found other examples. For instance, Frank

Marshall Davis's 600-page FBI file notes that Davis "became interested in the Communist Party" in the early 1930s. Among the chief attractions for Davis was the case of Angelo Herndon, a cause célèbre for communists. Davis discussed Herndon in his memoirs, describing him as a "young black Communist" of "unbelievable courage," who had prompted a "number" of "young Afro-Americans" to join the Communist Party.

The details of the Herndon case are complicated and not important here. As related to the "Forward!" slogan: It was used by Herndon's boosters. This is evident in a June 1934 pamphlet titled, "Free Angelo Herndon," published by the Young Worker, an arm of Herndon's Young Communist League of America. The concluding words of the pamphlet urge: "Forward to the freedom of Angelo Herndon! ... Forward to a Soviet America...!"

In short, Frank Marshall Davis, Obama's mentor, was an extremely active communist agitator no doubt familiar with "Forward!" as a communist slogan.

Finally, we cannot ignore the David Axelrod factor. Axelrod is Obama's chief campaign strategist, who specializes in sloganeering. Axelrod coined the "hope and change" slogan in 2008, and surely devised "Forward!" in 2012.

Well, Axelrod is likewise a product of this Chicago world, including (to some degree) the communist influences. Axelrod was mentored by David Canter. David and his father, Harry, were part of Chicago's communist orbit. Harry had been secretary of Boston's Communist Party, and both father and son spent the 1930s in Moscow, where Harry he worked for the Soviet government as a translator of Lenin's writings. Harry was among the small group that purchased the Chicago Star from Frank Marshall Davis in September 1948. Harry was familiar to Star readers. Among other instances, he appeared in the April 28, 1947 edition, wishing "May Day Greetings" to fellow comrades. Davis would have joined Harry at that May Day parade in Chicago. Davis editorialized in support of the 1947 May Day.

Both Harry and David Canter, like Davis, worked in the communist publishing world. In fact, David Canter worked with Frank Marshall Davis -- and also with Vernon Jarrett, Valerie Jarrett's father-in-law -- as a writer for the communist-controlled Packinghouse Workers Union.

Anyway, all of these comrades were familiar with slogans like "Forward!"

So, what does this mean? Am I saying that Obama and Axelrod learned "Forward!" from their old Chicago communist forebears? That's something I'm unable to definitively confirm. I'm inclined to think all of this is mere coincidence, and that the slogan is just some general left-wing platitude. But, gee, it's a heck of a coincidence -- and yet another at that.

Moreover, Obama and Axelrod are geniuses at coming up with words and phrases that seem vague and benign to the larger population -- especially to the ignorant independents/moderates who elected Obama in 2008 -- but which resonate with a hard left that understands the deeper meaning completely. That was certainly true for the "change" slogan. Those of us savvy to this stuff know the underlying message in "change." We interpret it the way that progressives and Fabian socialists and, yes, communists, understand it.

If Obama and Axelrod spent a lot of time with these Chicago influences and circles, they could have easily picked up the slogan "Forward!"

Either way, the "fundamental transformation" of America continues, compliments of the oblivious Americans who elected this political insanity in November 2008.

Paul Kengor is professor of political science at Grove City College. His books include The Crusader: Ronald Reagan and the Fall of Communism and Dupes: How America's Adversaries Have Manipulated Progressives for a Century. His forthcoming book is The Communist: Frank Marshall Davis, the Untold Story of Barack Obama's Mentor.