Warning: mysqli_free_result() expects parameter 1 to be mysqli_result, bool given in /var/www/html/americanthinker/admin/common/functions/func.general.php on line 126
 Attack of the Tea Party Zombies - American Thinker
|

Attack of the Tea Party Zombies

Readers who heed what the media says would have thought the tea party bitter clingers were dead, so this week's election results must have seemed to them like the attack of the zombies.

The zombies made their appearance known in Wisconsin, Indiana, and Utah.

Less than a year ago a Washington Post blogger contended the tea party was running out of steam, that Senators Olympia Snowe, Dick Lugar and Orrin Hatch looked to  easily win  re-election against tepid tea party opposition. 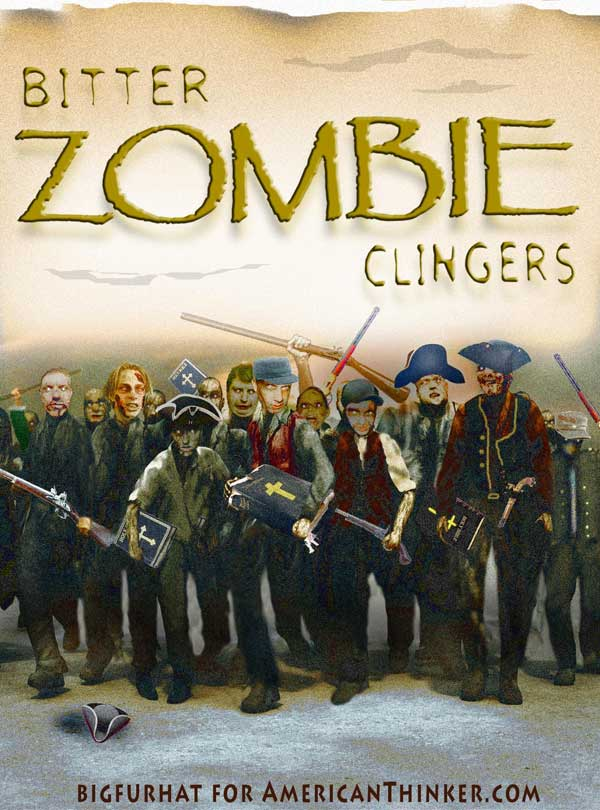 Snowe dropped out of the running; Lugar lost his primary election this week  after holding his seat as Senator from Indiana for 36 years, and Orrin Hatch was forced by his showing in a state convention into a primary even after he pledged to fight to overturn ObamaCare:

Hotline on Call says Hatch recently signed a pledge from the Independent Women's Voice and American Majority Action to dismantle President Obama's healthcare reform. The group asked Hatch to sign to sign the pledge when he first announced he was running for another term in the Senate.

Hotline says the timing is curious, as the group has begun running ads against Indiana Senator Dick Lugar, who did not sign the pledge. Lugar is in some serious trouble in his primary election against Richard Mourdock

A conservative strategist familiar with IWV's thinking said the group recently started running paid online ads pointing out that Indiana Treasurer Richard Mourdock has signed the pledge, but Lugar has not. The strategist added that the group also sent out a blast email last week to 250,000 people pointing out Lugar's refusal, though IWV has not technically endorsed in the Indiana race.

Hatch has navigated the GOP primary waters more proficiently than Lugar. If his team took notice of IWV's work in Indiana, it wouldn't be out of step with Hatch's dive to the right this year. For his own part, Hatch's campaign manager says he has no knowledge of who signed the pledge in Indiana.

"To be honest with you, I have no idea no idea who signed it and who has not signed it in Indiana," said Hatch campaign manager Dave Hansen when asked about the timing of Hatch's decision to sign the pledge. "[Hatch] has been for the repeal of Obamacare right from the beginning."

But it's another example of a moment in which Hatch has made an overt point to side with conservative outside groups, while Lugar has not.

pelling -- a state governor took on a very powerful combination of government employee unions and their left wing supporters in a very liberal state, was challenged to a recall election and looks to be sailing to re-election victory despite the combined efforts of the Democratic party and the injection of over ten million dollars in union contributions to his opposition.

Right On, a local blog, highlights the significance of Tuesday's victory.

Tuesday's recall election was a giant repudiation of Big Labor. It was a huge smackdown of the union bosses by a Wisconsin that is 86.5% non-union and tired of all the whining. Gov. Scott Walker was the real winner last night.

The air is out of the recall balloon. The government employee unions' anointed one, Kathleen Falk, was routed big-time. Their cause? In tatters. Their followers, dazed and dispirited.

Tom Barrett routed The Kathleen 58% to 34% in the Democrats' gubernatorial primary precisely because he did not sell his soul to the government labor unions. (In Dane County, where people know Falk best, he won 62% to 31%!)

That was expected.  Here is the shocker: With no reason for Republicans to vote, Gov. Scott Walker darn near got more votes than the four Democrats combined - 626,538 to 665,436. And how many of his supporters went for Falk in a mischief vote is an open question. What's more, the Democrats managed to attract only two-thirds as many votes as the 900,000 who signed the recall petitions. Why did almost 300,000 people stay home? [Snip]

Barrett stayed as far away from the Capitol temper tantrum last year as Milwaukee would allow. Didn't send a postcard. Refused to drink the Kool-Aid.

The mayor took on the government employee unions in his town.  He used Scott Walker's collective bargaining "tools" to balance his budget without laying off employees or raising taxes.  Which raises the question of what is the candidate's rationale, other than that he is "not a rock star."

The unions hate Barrett, teachers especially since he tried to take over Milwaukee's failing schools.  Will the unions work the telephones, drop literature, spend what remains of their members' dues on his behalf? The answer is yes, but only to some degree. The thrill is gone. Gee, I'd love to help but the lawn isn't going to mow itself.

The passion has been drained out of the Democrats' irredentist hopes to reclaim the Doyle mandate. (The what?) Tom Barrett, Mr. Nice Guy, is not the one to stoke the flames of desire.

Barrett, furthermore, cannot escape the indelible stain his political party has left on Wisconsin. Senators deserting their jobs, the Siege of the Capitol, boycotts, death threats, Michael Moore and Jesse Jackson - now they have saddled taxpayers with a $16 million recall - all for what?

Even Kathleen Vinehout, one of the Democratic candidates, said there's no going back completely from the Act 10 collective bargaining reforms, according to WisPolitics.com.

Walker was the real winner last night. Time is on his side. The budget is balanced, property taxes are down, government is open for business, kids are in school, unemployment is at a four-year low.[Emphasis supplied.]

When the winning Democratic challenger refuses to even show up to a post-primary "unity day" with the loser, you know the party will not easily come together by election time.

The answer to what happened to the  "almost 300,000" recall petition signers (one-third of the total) is that it turns out a lot of them were felony prisoners ineligible to vote and many other signatures were of folks who seemed to have signed only because they were coerced into doing so or were clearly phony ones probably generated ACORN style by the petition gatherers.   So much for relying on union-generated petitions.

If Lugar's defeat, the shot whizzing past Hatch's head and the Wisconsin trouncing weren't good news enough for the tea party and those who want fiscal reform and smaller government, the results in West Virginia had to be the most personally humiliating for the White House.  For there a jailed felon (Keith Judd, prisoner #11593-0510 who paid the $2,500 filing fee and no other campaign costs) garnered over 40 % of the primary votes against Obama.  As is its wont, the administration mouthpieces suggested that was racism at work, West Virginians do not like Obama. They made that clear in 2008 and since then he has done everything he could to increase their antipathy by driving the state's main industry, coal mining, into bankruptcy. West Virginia Democratic Senator Joe Manchin refused even to say for whom he voted -- the President or the felon.

To top off the week's votes, by a substantial margin North Carolinian voters amended their constitution to provide that marriage was between a man and a woman, joining a number of swing states in banning same sex marriages -- Colorado, Florida, Nevada, Ohio, Virginia, and Wisconsin -- and increasing pressure from Obama's wealthy gay contributors and their supporters to state his position by more than a wink and a nod.

At the same time, Obama is showing the same inability to handle campaign funds that he's demonstrated with the federal budget and he's spending them at a breathtaking rate. The unions have pitched much of what they had in Wisconsin's losing battle. So, after an unpersuasive " accidental outing" of his views by the Vice President, Obama decided it was time to come clean with voters on the issue.

He made his announcement with the same self-effacing clarity as he makes all his public remarks, and unsurprisingly, made it to ABC's Robin Roberts, yet another TV newsie certain to pitch softball questions: "At a certain point I've just concluded that for me personally, it is important for me to go ahead and affirm that I think same-sex couples should be able to get married." There you go. Isn't that a clear indication of what he intends to do? Not to me. That was good enough, however, to get Norman Lear and others to put pen to check and to get Hollywood , Cindy Lauper and Billy Jean King to swoon, but as Robert Miniter noted on facebook:

The Democrats had large majorities in both houses of Congress in the first two Obama years. Yet the president didn't even issue an executive order extending anti-discrimination protections in federal contracting to gay business owners, which the gay lobby has long demanded, let alone send a gay rights bill to the Democrats running Congress. Now gay marriage has zero chance of passage and Obama is suddenly for it. If you're a gay Democratic donor, you might feel a little used right now. And if you're a social conservative, you might feel energized: the president has now put in play a social issue where at least half the country agrees with you (including a majority of blacks and Hispanics) and the majority of GOP donors, who don't really care or don't agree with you, now will admit that your issue is important enough to fund.

Before the week was out, Michael Barone observed that Obama's re-election was far from inevitable.

By Friday, Rasmussen, the pollster I most highly regard, indicated Mitt Romney had a 7 point lead over Obama.