Warning: mysqli_free_result() expects parameter 1 to be mysqli_result, bool given in /var/www/html/americanthinker/admin/common/functions/func.general.php on line 126
 Why Israel Should, and Probably Will, Attack Iran - American Thinker
|

Why Israel Should, and Probably Will, Attack Iran

The Holocaust weighs heavily on Israel and its leaders.  Everyone knows the story of Jewish organizations pleading for help but helpless before the indifference of those in a position to make a difference.  This history discourages looking at the world through rose-colored glasses.  American liberals blithely dismiss the Iran threat because they assume that Iran is rational, that it will never attack Israel with nuclear weapons because of the threat of retaliation.  Israelis are not inclined to put their faith in this convenient theory that validates inaction.

Obama says that he has Israel's back.  But what if, when things get difficult, he doesn't have Israel's back?  Countries have interests, not friends.  However, the United States and the Obama re-election campaign have an interest in keeping the oil flowing from the Persian Gulf.  If tanker traffic is interrupted through the Strait of Hormuz, the price of oil can be expected to go sky-high, probably to more than $200 per barrel.  If continued very long, this would sink the world economy along with Obama's chances for re-election.

We have a strategic petroleum reserve holding more than 700 million barrels of crude oil, theoretically enough to bridge 70 days of imports of 10 million barrels a day.  However, the pumping capacity is limited to 4.4 million barrels a day, a rate that would decline as the reserve held in salt caverns is depleted.  The immediate shortfall would be about 6 million barrels a day.  About 3 million barrels of this could be expected to flow to the U.S. because it either comes by pipeline, and cannot be easily diverted, or because it is a type of crude that only specialized refineries in the U.S. can handle.  However, with 25% of the world's oil supply blocked, countries with much more dire situations than ours would be bidding up the price for the remaining oil.  The administration could try to impose price controls to keep the price of domestic crude below the world price, but of course this would make the situation worse by encouraging consumption and imposing rationing by long lines at gas stations.  A blocked Strait of Hormuz would be a disaster for the world, the U.S., and Obama's chance for re-election.  No doubt the last is the dominant concern of the administration.

The Israelis have the capacity to mount a substantial attack.  Exactly how effective this would be depends on factors hidden by the fog of war.  Currently the U.S. has two carrier task forces in or near the Persian Gulf.  If the Israelis attack, the U.S. will certainly have at least an hour's advance notice, if not much more.  Our radar planes will see the Israeli's coming.  If the Israelis attack, the Iranians have threatened to close the Straits.  Although they cannot win a navel war in the Gulf, they certainly have the capacity to cause a lot of trouble.  It would seem not to be in the Iranians' interest to close the Straits, but they may just decide to roll the dice and do it.  We just don't know and can't make a confident prediction.  If we sit back and let the Iranians take the initiative, we will be in a much worse position than if we blast the Iranian assets before they can take action.

Obama has two possible strategies.  He can pile on when the Israelis are seen to be coming and pre-empt any Iranian attempt to close the Gulf, or he can wait to see an Iranian effort starting and then attack.  The second option may not work, because the Iranians may be able to attack very suddenly even if it seems that they are not preparing an attack.

The Iranians have developed forces that are designed to make trouble for the Americans.  For example, Iran has sea-skimming anti-ship missiles, mines, submarines, and attack speedboats.  It is far better militarily to blast these forces before they go to sea than to face them in the confined waters of the Persian Gulf.  The missiles benefit from Russian and Chinese technology that was developed specifically to counter American naval power.  They come in at extremely high speed and maneuver to avoid American defenses.  Presumably the U.S. commanders would like to keep their fleets out of the Gulf and away from Iran to avoid this threat, but that would make it more difficult to protect the Straits or attack Iran. 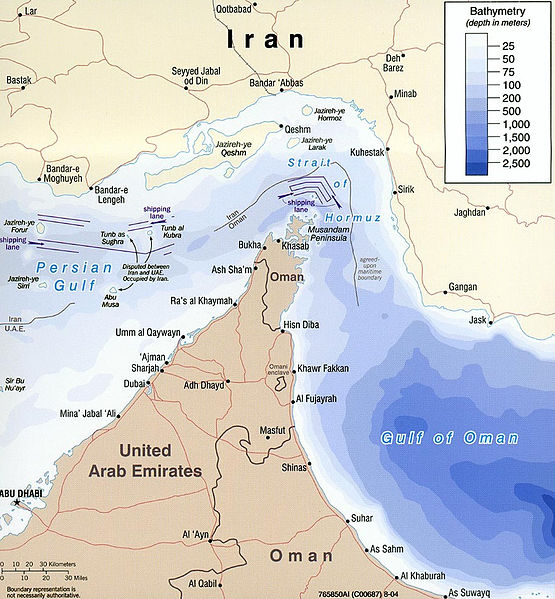 The U.S. Navy decisively defeated Iranian forces in 1988 when a restrained attack was launched after a U.S. frigate struck an Iranian mine.  However the Iranians have had the last 24 years to think about their defeat, and they may have some surprises in store.  Certainly the U.S. military would be careful and would prefer to make a surprise attack rather than respond to an Iranian attack.  My guess is that the U.S. forces have orders either to immediately attack Iranian naval forces if the Israelis are seen approaching, or, more conservatively, to watch the Iranians closely and attack if the Iranians are seen as making any move to take control of the Strait of Hormuz.  To wait for the Iranians to attack would be courting a serious disaster, possibly losing ships and having the Straits closed by mines for months.  Conversely, the Iranians could not be expected to wait passively for the U.S. to destroy their navy.  They would be strongly tempted to take the initiative.  In other words, an Israeli attack would induce an unstable, hair-trigger situation.

The Iranians may see it to be to their advantage to close the Strait.  If remotely controllable mines were used, the Iranians might be in a position to open and close the Strait as they desired.  They could blackmail the West by offering to let tankers through in exchange for concessions.  This probably wouldn't work and would lead to increased military pressure on Iran, but the Iranians, having been treated to a weak Western response to their nuclear bomb program, might underestimate the U.S. and other countries.

The downside is that if the Iranians were decisively defeated and the flow of oil maintained, Obama could be re-elected.

Norman Rogers is a senior policy advisor at the Heartland Institute, a Midwest think-tank.  He often writes on energy issues and maintains a personal website.