Warning: mysqli_free_result() expects parameter 1 to be mysqli_result, bool given in /var/www/html/americanthinker/admin/common/functions/func.general.php on line 126
 Where Are the Rolling Heads from NOAA? - American Thinker
|

Where Are the Rolling Heads from NOAA?

Scandals are shaking the Obama administration.  Personnel with the highest of security clearances are being intimate, in the most basic definition of the word, with foreign nationals.  Pillow talk, anyone?  Other high-ranking officials cavort with clowns and psychics, all paid for on the government dime.  Hot tub, anyone?

In the meantime, a human tragedy is occurring driven by a much more expensive if equally sordid scandal at NOAA that goes on under the radar of media attention.  Steve Urbon of the New Bedford Standard-Times asks, "What about our scandal?"

Back in February 2011, CBS News did an exposé on the NOAA law enforcement scandal.  As far as I know, this has been the only national coverage of the outrage other than what's appeared here at American Thinker (AT).  AT has been reporting on the NOAA scandal for the past two years.  Many of the citations and links in this essay are from AT's coverage.  CBS showed a clip of Senator Grassley, who said, "I want to make sure that heads roll ... because in a bureaucracy, if heads don't roll, you don't change behavior."

Last week, a dozen or so Secret Service agents, including a couple of supervisors, did what boys do.  Wham, bam, thank you, ma'am!  Problem was, they were on duty in a foreign country, protecting the president.  Not a good thing.

The first cut made for three heads: one supervisor gone, allowed to retire; another supervisor being discharged, with 30 days to mount a defense; a third non-supervisory person resigned.  Three more were announced on 20 April, and there are probably more to come.

Six and counting!  Secret Service behavior will be better in the future.

A couple of weeks earlier, we were told of some hijinks at the GSA.  That's the GSA that is chartered with overseeing the spending of our money.  The following is from the Washington Post on 2 April:

The chief of the General Services Administration resigned, two of her top deputies were fired and four managers were placed on leave Monday amid reports of lavish spending at a conference off the Las Vegas Strip[.]

That's three GSA heads gone and four other heads hovering above the block.  A very definite message in the behavioral department.

And then there is NOAA.  NOAA law enforcement was running essentially unsupervised for years, inflicting huge fines on fishermen for small infractions and putting the collected monies in a slush fund used for lavish trips and booze-cruise luxury boats.

The GSA conference cost $822,751 according to the GSA IG Report.  To give this some context, Leon Panetta's trips home have totaled about $860,000.

I have taken a slight liberty with the dialogue in a recent Michael Ramirez cartoon:

[Q:]  The GSA wasted millions of taxpayer's money[, Dr. Lubchenco, administrator of NOAA].  Do you have a comment?

NOAA law enforcement collected close to $100,000,000 in fines and seized goods from fishermen over the past several years.  The Department of Commerce IG investigated and found that only about $60M could be accounted for, while some $40M is just plain gone.  This is not taxpayer money, but money taken in huge chunks from fishermen for infractions, some very minor.  Claims by the fishermen of coercion and extortion were validated by the IG.  See the IG reports here, here, and here.

One single fisherman, Larry Yacobian, ended up paying $450,000 in fines and owing $250,000 in legal fees.  He was forced to sell his boats, his gear, and the farm that had been in his wife's family since the days of the Pilgrims.  A special master appointed by the IG found that Mr. Yacobian had been treated unfairly.  The government returned $400,000 to Mr. Yacobian, and the Secretary of Commerce, Gary Locke, apologized personally.

But nobody has ever been punished.

Why?  Because the NOAA outrages are based on cronyism and fully condoned by our current brand of Big Government.  Dr. Jane Lubchenco (pictured), 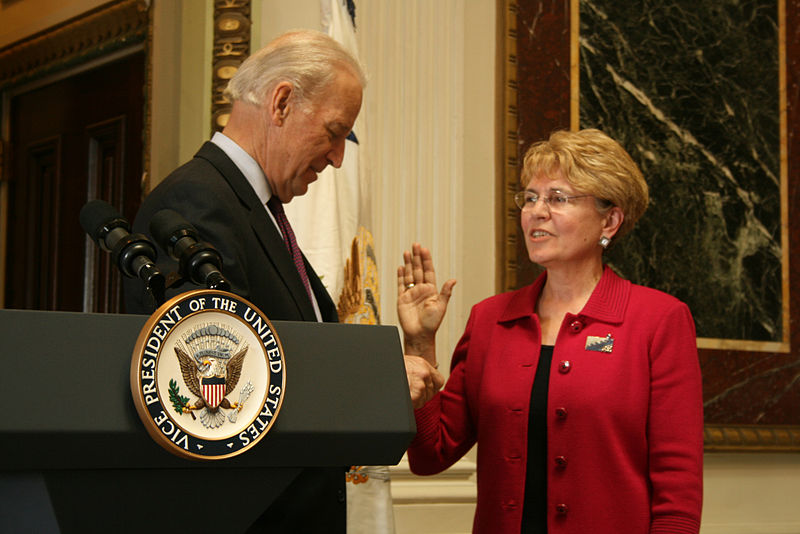 the person who decides on reward or punishment at NOAA, is an environmental superstar and Obama's favorite eco-zealot.  Dr. Lubchenco, with the cognizance and support of the president, has filled the upper management of NOAA with like-minded eco-zealots.  They are knowingly and purposefully shrinking the fishing fleet, driving hardworking Americans out of business and out of work to consolidate the industry.  Their goal, echoing the Environmental Defense Fund, is to turn fish and fishing into a commodity-based enterprise for the gain of their cronies.

Nils E. Stolpe has written extensively on this subject.  I highly recommend his "The Big Green Money Machine - how anti-fishing activists are taking over NOAA."  His article includes a link to a database that documents the astounding funding that the Green Money Machine has poured into its war on the fishing industry.

Now we know why nobody gets punished at NOAA.  What about it, Senator Grassley?  You said, "I want to make sure heads roll" on the CBS News show previously linked.  Are you just another empty suit named Chuck?

Where are the heads rolling out of NOAA?

Mike Johnson is a concerned citizen, a small-government conservative, and a live-free-or-die resident of New Hampshire.  E-mail mnosnhoj@comcast.net.