Warning: mysqli_free_result() expects parameter 1 to be mysqli_result, bool given in /var/www/html/americanthinker/admin/common/functions/func.general.php on line 126
 This Week's Exploding Cigar: Obama, the Dog Eater - American Thinker
|

As Don Surber notes: "Sadly, the economy still slogs along with gun sales as the lone bright sport."  Aware that this is not the kind of record you win re-election on, Obama's crack campaign staff has --with the aid of their

media lapdogs-- set up a series of diversions, each of which is  exploding in Obama's face like Wile E. Coyote's Acme exploding cigars.

Last week the "Republican War on Women" disintegrated when DNC operative Hilary Rosen claimed Ann Romney, a mother of five, never worked a day in her life, so was an odd choice for Mitt's adviser. That was followed by the news that Obama paid the women on his staff 18% less than the male staffers and that Hilary Rosen was a very well paid corporate lobbyist with unprecedented access to the same white House Obama had pledged would not be influenced by lobbyists.

This week, the campaign, aka Acme Cigar Corporation,decided it was time again to try to paint Mitt Romney as personally dislikeable by trotting out a 30 year old tale about his putting the family dog

in a carrier on the family station wagon for a trip. Seamus, the dog, protected by a jerry built wind screen, survived, but the story was  touted once again by Acme and its press buddies in the belief that as history proved, one can with media helpers knock out Republican candidates on silly externals.  Play the race game (Trayvon), the Women's Rights charade (Rosen and Fluke) and the animal lovers' heart strings (Seamus), and in that way  pick up piece by piece the blocs of independents they so sorely need to prevail.

Treacher dug this out of Dreams from My Father, Obama's supposed autobiographical novel which the press praised as evidence of his genius, apparently without ever reading it:

"With Lolo, I learned how to eat small green chill peppers raw with dinner (plenty of rice), and, away from the dinner table, I was introduced to dog meat (tough), snake meat (tougher), and roasted grasshopper (crunchy). Like many Indonesians, Lolo followed a brand of Islam that could make room for the remnants of more ancient animist and Hindu faiths. He explained that a man took on the powers of whatever he ate: One day soon, he promised, he would bring home a piece of tiger meat for us to share."

Yep, that's Barack Obama, writing about his childhood with his stepfather Lolo Soetoro in Indonesia, from Chapter Two of his bestseller Dreams from My Father: A Story of Race and Inheritance.

Leaving aside how the press which did such detailed checking on Obama's opponents (remember how they scoured Palin's emails and Trig's birth records?) -- and every Republican national candidate for decades -- missed this, the news that President was a dog eater, unleashed a ton of creative juices, from YouTube to photoshops to bon mots and clever captioning. Here are some of the best of them: 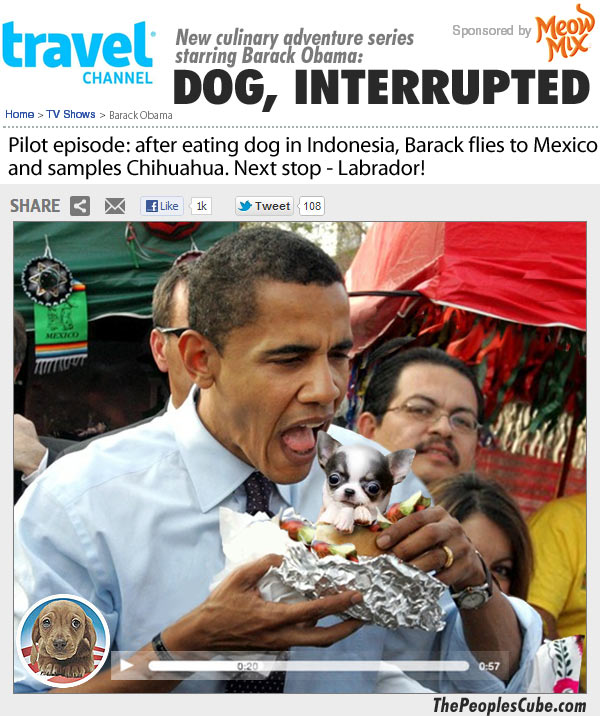 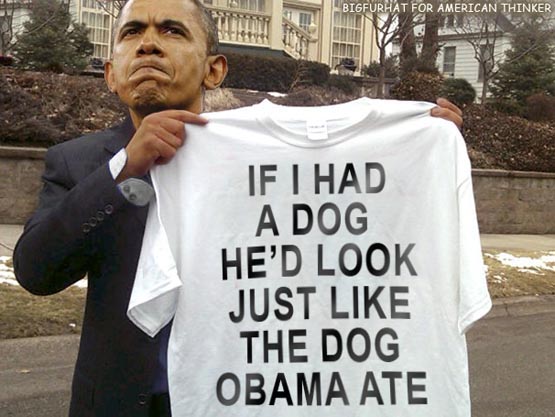 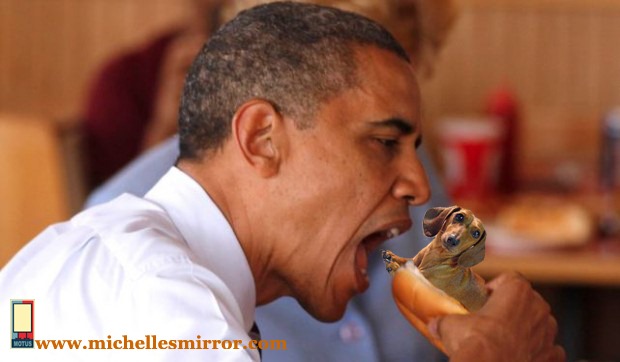 My favorite is the sidesplitting video of Hitler finding out that Obama ate his dog, Fluffy.

The damning story is in Obama's autobiography and therefore not deniable which makes it particularly harmful to him.

Is the story true -- even if he cannot deny it? My friend "JiB" who lived in Indonesia found it exceedingly dubious:

[T]here are places in Indonesia where dog is eaten. Mostly in the east of the archipeligo - like Sulewesi. It is variously called Kembing barap, Rica-Rica guluk or Sate Jamu. It is the Muslim of the Indonesian who refrains and Lolo Soetero was Muslim. That is why I have always doubted the story since I saw Treacher's post.

If it's not true? Why is it in the book?

Was the real author -- who like Cashill I believe was ex-Weatherman Bill Ayers -- just checking to see if Obama was proofreading the book -- a theory some wag has suggested?

Even if it were true ,Obama was an adult when the book was written and there was no need to put in such an incident -- revolting to so many Americans.

That's why I think ,true or not, Spengler (David Goldman) is right on the mark about the incident:

What a careful reader will take away from Barack Obama's memoir Dreams from My Father is not only that the president used to eat dog meat, but more importantly, that he identifies with dog-eaters. He wants us to understand that he is one of them. Obama's most severe critics on the right think of Obama as a socialist, for example, Dinesh D'Souza, or Stanley Kurtz in his exhaustively-researched book Radical-in-Chief. Obama used to attend the annual "Socialist Scholars Conference" in New York, which was a hard-core affair; I went to a couple of them, and they weren't for the curious. But there is something far more visceral, more existential to the president's dislike of the United States, and that arises from his early residence in the Third World, and his identification with the people of the Third World whose lives are disrupted by the creative destruction that America has unleashed.

Obama is the son of a Kenyan Muslim father, the stepson of an Indonesian Muslim, and the child, most of all, of an American anthropologist who devoted her career to protecting Indonesian traditional life against the depredations of the global marketplace. Her doctoral dissertation, "Peasant blacksmithing in Indonesia: surviving against all odds," celebrated traditional cultures hanging on desperately in the face of the global economic marketplace.

Ms. Dunham was not only a Communist fellow-traveler, but the sort of 1960s woman who (as we used to say) "put her body on the line," first by marrying two Third World men, and then by spending her career in the Third World. It is no surprise that Obama considers the Third World morally superior to the United States. [snip]

Obama profiles Americans the way anthropologists interact with primitive peoples. He holds his own view in reserve and emphatically draws out the feelings of others; that is how friends and colleagues describe his modus operandi since his days at the Harvard Law Review, through his years as a community activist in Chicago, and in national politics. Anthropologists, though, proceed from resentment against the devouring culture of America and sympathy with the endangered cultures of the primitive world. Obama inverts the anthropological model: he applies the tools of cultural manipulation out of resentment against America. The probable next president of the United States is a mother's revenge against the America she despised.

It really isn't unfair at all to bring Obama's canine consumption to public attention. The president isn't really one of us. He's a dog-eater. He tells the story in his memoir to emphasize that viscerally, Obama identifies with the Third World of his upbringing more than with the America of his adulthood. It is our great misfortune to have a president who dislikes our country at this juncture in our history.

In the meantime, the press is largely ignoring the story and the White House spokesman is not denying it but just trying to brush it off with a lame joke about being in the "doghouse".

The only notice I found of it in the Washington Post was a blog by Jennifer Rubin  who like Newt Gingrich indicated it isn't significant and we should concentrate on the economy.  Nonsense.

Ridicule and exposure are significant political tools, tools which the right better learn to use. Obamacare, the economy and Obama's poor handling of it, and the increasing , unavoidable evidence that he is over his head in managing the executive branch are the big issues, but a great many voters are not as interested in such things. They are low information voters who vote on an emotional basis and that cannot be ignored.

I'm with moneyrunner on this one:

We may be seeing the end of an era dominated by ability of Leftist comedians like Jon Stewart, Bill Maher or the cast of SNL to create a false image of a political figure. Perhaps the trashing of Sarah Palin was the high point of their power, just as Watergate was for the MSM.

Ridicule is the most potent political weapon. Obama is rapidly looking less and less like a President and more and more like an inept pol who's also something of a doofus. Romney looks like a President, he acts and talks like a President; Obama was always surrounded by a rock star aura. But a rock star is not blamed for high unemployment or soaring gas prices. Obama will always have his groupies, but his hold on the Oval Office is slipping away.

Anyway, if SNL is looking for some new material, Instapundit found this on Facebook: " Obama just got endorsements from Michael Vick and Anthony Bourdain."