Warning: mysqli_free_result() expects parameter 1 to be mysqli_result, bool given in /var/www/html/americanthinker/admin/common/functions/func.general.php on line 126
 Justice for Trayvon, No Justice for Agents Terry and Zapata - American Thinker
|

People Magazine has an angelic-looking Trayvon Martin on its cover this week with the headline "An American Tragedy."  I agree.  Whenever a mother loses a child, it's a tragedy.

So I searched People's archives for cover photos of slain Border Patrol Agent Brian Terry and ICE agent Jaime Zapata.  Both died in service of their country, both killings involved questionable circumstances, and both Mrs. Zapata and Mrs. Terry are still waiting for answers a year later.

Despite the volatile and controversial circumstances surrounding the slayings of Terry and Zapata, my search turned up zero cover stories at People.  None. 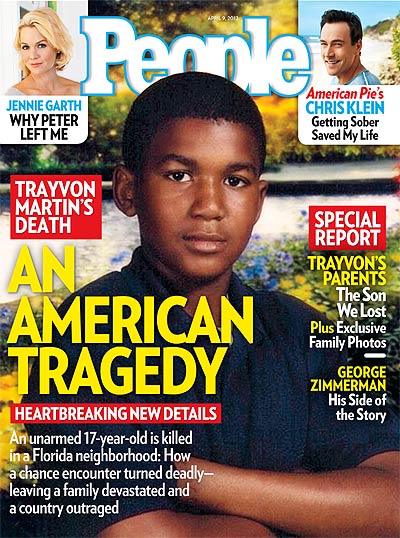 Even worse, while I perused the magazine's old online articles, the evening news was on in the background.  Al Sharpton was speaking from Sanford, Florida, where 17-year-old Trayvon Martin died in February.  Thousands of protesters with signs that read "Justice for Trayvon" gathered to hear Sharpton condemn officials for the lack of information regarding the shooting.

Jesse Jackson, who also attended, said "there is a meanness in our country today."

NAACP president Ben Jealous, who organized the march, shouted that "we're here to save our sons."

Bernard Simelton, president of the Alabama state conference of the NAACP, said things happen like this in Alabama, too, where people get killed and the "police just sweep it under the rug. It just touches everyone."

How moving.  Too bad Mr. and Mrs. Zapata, whose son could have been saved if not for the cover-up of a dangerous gun-trafficking operation, can't get any information.  It's been only one month for Martin; it's been over a year for the Zapatas.

As a mother, I would want my sons to look and act like Terry and Zapata.  By all accounts they were stellar examples of American exceptionalism.  ICE director John Morton, who spoke at Jaime's funeral in February 2011, said it best.

Mr. and Mrs. Zapata your son represents the best of America - he is why we are a great country.

The men who shot into his car are empty and without souls. They could live a thousand years but would still amount to nothing, nothing compared to Jaime.

Jaime died on February 15, 2011 in Mexico, many miles away from his loved ones.  The guns found at the murder scene were later traced to a federally sanctioned gun-walking program.  Government higher-ups allowed guns to walk untraced straight into the hands of killer drug cartels.  So far, the Department of Justice has not held anyone accountable.

Agent Brian Terry died on December 14, 2010 in a remote area of Peck Canyon in Arizona.  He was shot in the lower back and mortally wounded.  The guns found at the scene were linked to Operation Fast and Furious -- to date, the Department of Justice has held no higher-ups accountable.  Brian left behind a devoted, heartbroken family.

Brian had such a charisma about him. He could walk into a room and his stature and confidence took over. His family and friends found him to be very witty and funny. He had a way about him that inspired and motivated those around him to do better and be better. Brian was never in competition with anyone except himself. He pushed himself to be the best he could be. He helped those that didn't believe in themselves and would say that if you just put the work in nothing is impossible.

Mary Zapata says every day and every night she thinks about what her son went through in his last moments.  She said having answers to her many questions would help the healing process, but the same government officials who ran Project Gunwalker refuse to give the family any information.  There are no marches, no organized rallies, and no collective outcry for justice for Jaime.

Mr. and Mrs. Terry have also had to deal with the Fast and Furious cover-up since their beloved Brian died over a year ago.  Last week Politico reported the Terry family was "sickened" to hear that law enforcement agencies were not sharing information back in 2010 -- information that could have led to the end of Fast and Furious before the murder of their son and countless others.

These mothers are fighting an uphill battle against the in-your-face "meanness" of Attorney General Eric Holder as well as a deafening silence from the mainstream media.  Trayvon Martin's mother has garnered national headlines, trademarked her son's name, and met with government officials.

Yet Mrs. Terry and Mrs. Zapata seem to have little interest in using their sons to create a national crisis. But they do want to know who at the top is responsible for the deadly operation that led to the murders of Brian and Jaime.