Warning: mysqli_free_result() expects parameter 1 to be mysqli_result, bool given in /var/www/html/americanthinker/admin/common/functions/func.general.php on line 126
 How I Learned to Love Savannah Guthrie - American Thinker
|

How I Learned to Love Savannah Guthrie

Recently American Thinker published my article, "Oblivious to the Obvious," which gives clear, understandable proof, as shown below in Figure F from that article, why Barack Obama's long-form "birth certificate" is a forgery.

Figure F.  In a real typewritten document, the letters line up vertically.  In the Obama "birth certificate" forgery, they do not.

with embossed seal, offered to the press as proof of the president's birth in Hawaii.  It is not an image constructed digitally. NBC's Savannah Guthrie snapped a picture of it and posted it to the web. But for her enterprise, I could not have analyzed the "real thing" as shown to the media.

As I wrote that article, I realized that I should, if asked, be able to document exactly how I got from the original picture of the paper certificate that Savannah Guthrie took on April 27, 2011 to figure F, so you can replicate the same result yourself.  So what follows is a description of  how I did this.

Guthrie posted the snapshot she took (presumably with her cell phone) of the original paper "birth certificate" to a blog page on Lockerz.  As I write these words, that posting is still available on the internet at http://lockerz.com/s/96540721.  (But I don't guarantee that it will remain there!)

You can drag that picture from the web page directly onto your computer's desktop, or you can capture the image of the web page as it appears on your desktop; either approach is valid.  I chose to capture the entire web page (as much as I could fit on my computer screen) using the Macintosh utility Grab, and the result is shown below in Figure G. 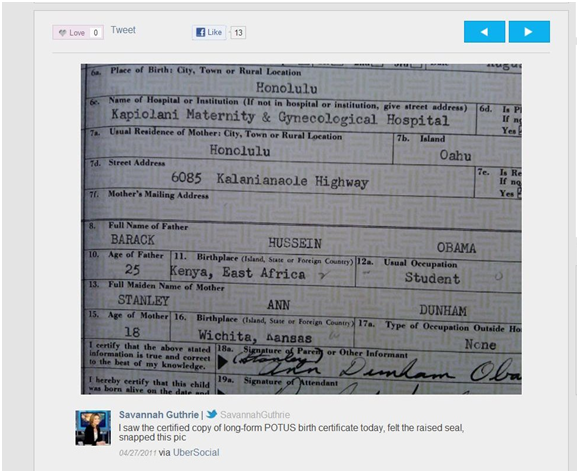 Figure G. Savannah Guthrie's close-up picture of the certified copy of the Obama "birth certificate" as posted to Lockerz.

Also note Guthrie's comment: "I saw the certified copy of long form POTUS birth certificate today, felt the raised seal, snapped this pic."  It is clear from her description that she saw, touched, and photographed the actual document, complete with raised seal and green security-paper background, which was shown to the press pool at the White House on the morning of April 27.  There is some confusion on this point because her picture is grayish, so people assume that it is a picture of one of the black-and-white copies of the "birth certificate" included in the press kits, with the image later released by the Associated Press.  But this is not the case, because the press-packet images did not show the security-paper background.  Guthrie's picture does, so she photographed the real thing.

Also, if you take her picture (x2-5c11831.jpg if you dragged it to your desktop) and run it through photo-image-correcting software for lousy pictures, the green-colored security-paper background will pop right out.  But I didn't do that here, because I didn't want to alter the picture in any way and risk being accused of tampering with it.

On Guthrie's blog page, the "birth certificate" image slants slightly to the right, and the software I use, GraphicConverter for Macintosh (v. 6.0.4) will do copy-and-paste in a horizontal-vertical orientation, but not on a slant.  So I had to rotate the image (using the Other Value with Live Rotation feature in GraphicConverter) to orient the snapshot horizontally.  The result is shown in Figure R: 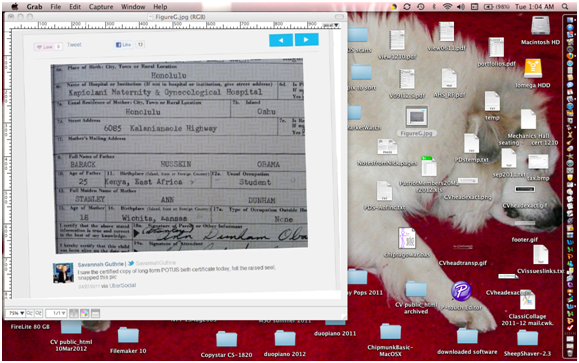 The next step was to select the area of interest that I wanted to work with and copy it to the Clipboard, as shown in Figure C: 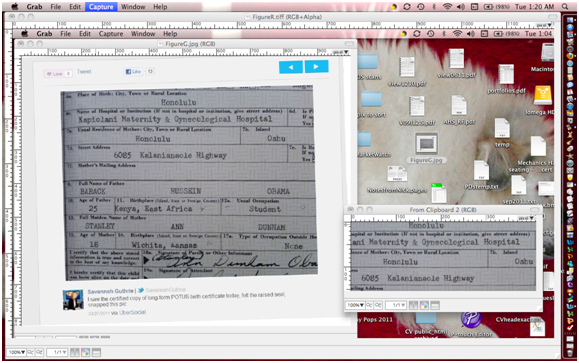 Figure C. Copying the beginning of Figure F to the Clipboard.

Then I saved the contents of the Clipboard to a new, temporary file as a JPEG, shown in Figure X.  (The Grab program produces TIFFs.)

Then, opening Figure X in GraphicConverter, I selected just the text "6085 Kalanianaole Highway" and copied it to the Clipboard.

From the Clipboard I selected that image, then dragged it on top of the words "Maternity & Gynecological Hospital" in Figure X.  As one does this drag-and-drop operation, the text being dragged from the Clipboard turns somewhat translucent, so I was able to position the two letters "a" (in "Highway" and "Hospital") directly on top of each other for near-perfect alignment.  But when the positioning is complete and the computer mouse is released, the dragged image dropped onto Figure X turns opaque again, blotting out what's underneath, as shown in Figure S: 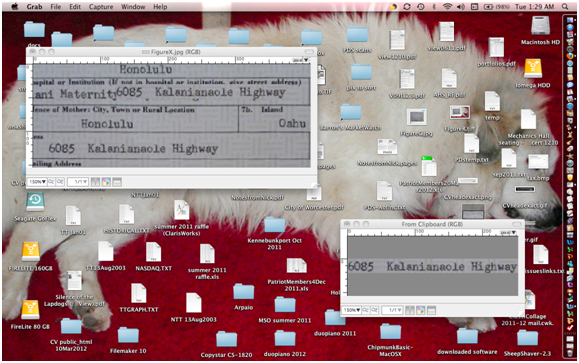 Figure S. Drag-and-drop onto Figure X. (Figure X and Clipboard both scaled to 150% for easier alignment.)

But that dropped image can still be moved around until you tell GraphicConverter you're done.  And I moved it upward with the up-arrow (cursor) key, guaranteeing only vertical motion in the realignment, until both lines of text could be seen.  I saved the result as Figure F, and I was done.

Nick Chase is a retired but still very active technical writer, technical editor, computer programmer, and stock market newsletter writer.  During his career he has produced documentation on computers, typewriters, typesetters, headline-makers, and other pieces of equipment most people never heard of, and he has programmed typesetting equipment.  You can read more of his work at contrariansview.org.