Warning: mysqli_free_result() expects parameter 1 to be mysqli_result, bool given in /var/www/html/americanthinker/admin/common/functions/func.general.php on line 126
 Do-It-Yourself Proof of the Obama Birth Certificate Fraud - American Thinker
|

I think the work of Nick Chase, simplifying "for the masses" the analysis of the forged copy of the Obama long-form birth certificate circulated a year ago by the White House, is absolutely brilliant.  I suggest that you read his articles in the American Thinker.

In his first article, "Oblivious to the Obvious," Nick explains pitch in typewriters.

In his second article, "How I Learned to Love Savannah Guthrie," Nick explains how he obtained an original picture and how he used "cut and paste" to move things around.

I do not mind "getting my hands dirty," and so I decided to try it out myself.

Proving that there is a serious problem of authenticity with this document was easier than I expected.

You can do the same, using the same source picture, but using an even a simpler procedure than what Nick Chase described.  You can do it on a PC, without having to rotate or touch the images at all.  Here is how:

First, I went to the original site showing the copy from Savannah Guthrie: http://lockerz.com/s/96540721.

The following is the original picture of the paper certificate that Savannah Guthrie took on April 27, 2011, as you can find in the above-mentioned site: 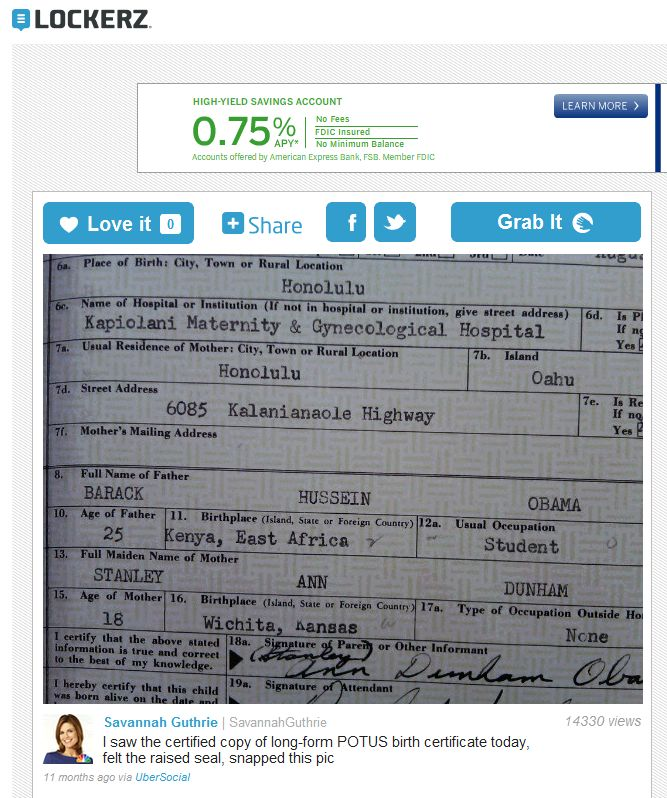 I right-clicked on the picture and chose "Copy Image."

Then I opened Microsoft Image Composer and pasted the picture in a new file: 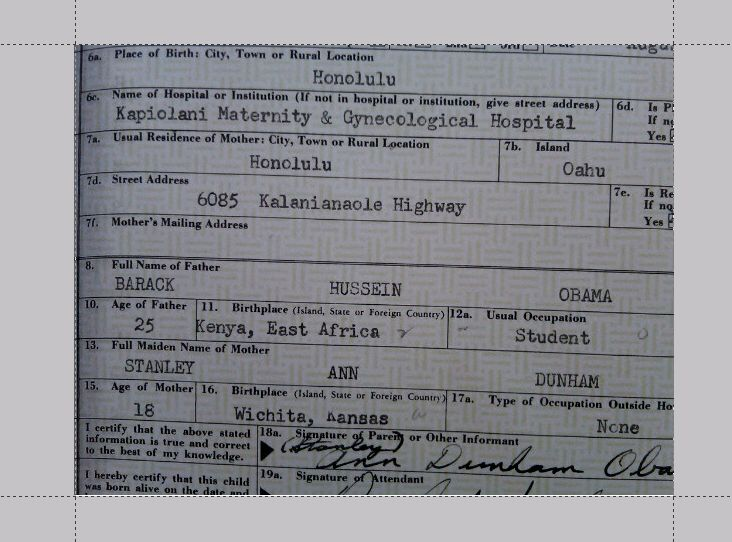 Then I used the "cut out" function to select and cut out the word "Highway". 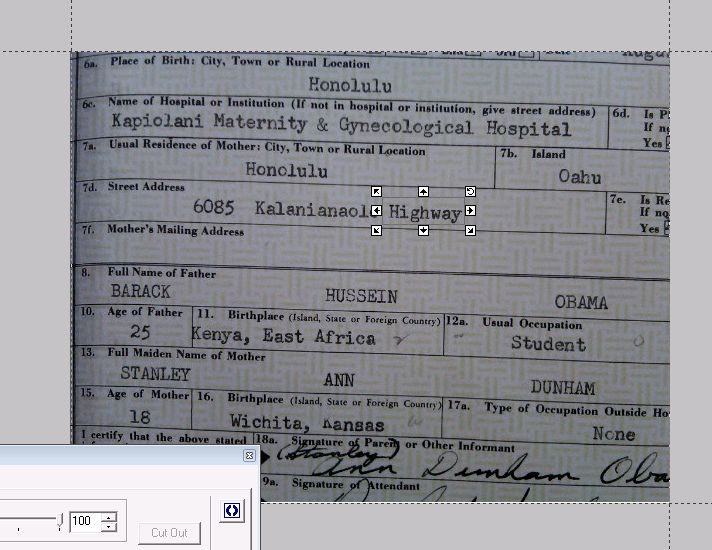 Then I placed the word "Highway," as cut, above the word "Hospital," precisely aligning vertically the two as.  The aim here is to look for differences in alignment, as Nick Chase says:

[A]ll of the typed characters in a row of text would, if placed over another typed row of text, be in perfect vertical alignment (including typed spaces), because each typed character occupies exactly the same horizontal space in its row. That's what "monospace" means[.] 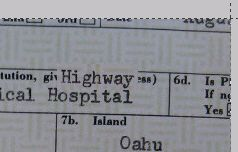 Looking at the above pictures, you can then see that the pitch of the two words is different, as the H of "Highway" is well to the right of the o of "Hospital."  You can clearly see that the two words were typed by different typewriters (In addition to having a degree in computer science, I was a typist in the Italian Army).  Even the size of the letters is visibly smaller in the word "Highway" than in the word "Hospital."

The above proves that at least two different typewriters were used to type the same certificate.

Is this a conclusive proof? As Nick Chase says:

If you think that the reason why there are two different typewriter typefaces in the document is because two typewriters were used in its preparation, the second typewriter being used because the first broke down -- forget it. ...

Second, remember that the proof of forgery in Figure F is not a unique proof [of forgery.] ... Researchers have conclusively demonstrated that the "birth certificate" is fake in many different ways, and that it was digitally constructed.  [The above proof] is simply an additional proof of forgery that more people are able to understand because it requires very little technical expertise to comprehend it.

Of course, none of the above has anything to do with where Mr. Obama was born, but it all has everything to do with a forged document released by the White House.  I think this is pretty relevant, when such a document is required during the nomination process for the election of the president of the United States, to verify that the qualifications of the candidates comply with the requirements of the law.

If I have a doubt, it is the following: will the non-technical people in the media understand, or accept, this simple demonstration?