By Douglas A. Perednia, M.D.

Earlier this year, CNN broke the story that generations of dermatologists have been "cheating" on their specialty board certification exams.  Like their colleagues in radiology and most other medical specialties, large numbers of dermatology trainees have been studying for the boards by using massive collections of historical exam questions that were memorized and shared immediately after each year's test.  Having access to these questions is useful because many specialty boards re-use questions from previous tests.  Until this year about 20% of the questions used by the American Board of Dermatology (ABD) were recycled from previous years, compared with about 50% for the written exam in radiology.

The widespread use of these so-called "airplane notes" or "recalls" has been common knowledge in the medical world for decades, but the flurry of recent press reports has caused consternation in the powerful board certification industry.  Stung by the publicity, the American Board of Medical Specialties issued a press release condemning the practice and calling it an unethical violation of copyright laws.  Apparently caught by surprise, the executive director of the ABD admitted that she'd "never seen airplane notes, but I've heard about it", and subsequently cancelled a scheduled on-camera interview on the topic.  Meanwhile, the American Board of Radiology hurriedly announced that its 2012 certification examination will be composed of entirely new questions for the first time in ten years.  But while the lay press often frames the issue as one of "public safety", the real scandal surrounding specialty board certification is quite different.

Modern specialty boards are holdovers from a time when there was little standardization or regulation of medical training.  The American Board of Dermatology was founded in 1932, a time when various programs to train dermatologists ran for either one, two or three years.  This era ended for good in 1981 when the Accreditation Council for Graduate Medical Education was established to regulate and accredit residency training programs for all medical specialties.  Every physician in America is now superbly trained over a period ranging from three to seven years depending upon their specialty.  As quality and standardization improved, medical boards began making test questions increasingly esoteric in order to preserve a normal statistical distribution of scores.  Most boards also began grading "on the curve"; failing a percentage of examinees with the lowest test scores regardless of whether the content they missed was critical to the practice of safe, high-quality medicine.  "Recall" and "airplane notes" developed in direct response to these "fail somebody" policies.  As one radiologist said to CNN: ""If they had a test where you could study relevant radiology knowledge and they tested on it, that would be fine.  Part of the problem is the test and the questions that they ask.  Because some of the questions are so obscure, that unless you know that they like to ask questions about that topic, you're not going to study it because some of them are completely irrelevant to the modern practice of radiology."

None of this would matter except that medical boards have managed to turn their monopoly on physician certification into a multi-million dollar gauntlet of tests and more tests that must be passed in order for physicians to stay on insurance plans and hospitals' staffs.  Taking the initial dermatology board certification exam comes with a $2,500 fee, while regularly required "maintenance of certification" tests cost nearly $1,000 each.  And therein lies the true scandal in the saga of board certification and "recall" questions: it's not that the tests are allowing incompetent physicians to care for patients, but that they are keeping many highly qualified doctors from entering practice and earning a living.

The math behind this injustice is relatively simple.  The nearby figure shows the score distributions of two hypothetical board certification exams like the one given by the ABD, each composed of 300 questions.  The left-hand curve shows a normal distribution of scores if none of the examinees have access to questions from previous tests that are re-used on this one.  The right-hand curve shows the change in scores that will result if 90% of the test takers already know the answers to 60 out of the 300 questions as a result of studying "airplane notes.  Let us further assume that the specialty board in question decides that it will flunk out the bottom 10th percentile of test takers as a matter of "ensuring the quality" of its certification procedures. 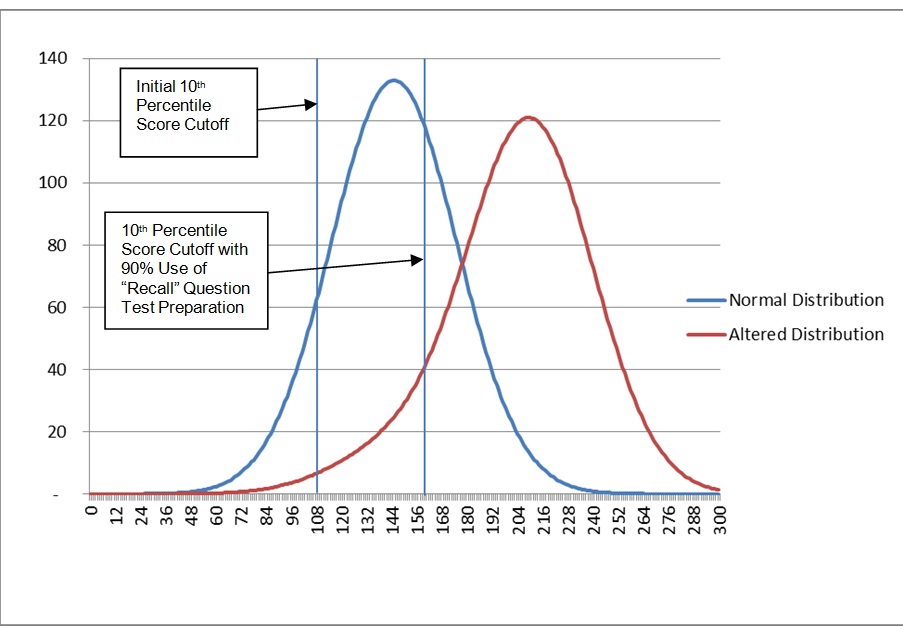 Although the curves look similar, the use of recall notes produces a big difference in the specific score that will be used to fail test takers.  In turn, this translates into a major change in who will be allowed to pass the test.  Over half of doctors who did not use "airplane notes" and who would normally have been safely above the 10th percentile threshold will now flunk as a direct result of their inability to answer all of the re-used questions correctly.  These well-trained and competent physicians will be wrongfully kept from medical practice while they prepare for next year's $2,500 test.  If they're smart they'll find a set of "airplane notes" to study from rather than risk failure yet again.  It's no wonder that training program directors have been known to encourage their young doctors to seek out every review course, old test question and study tool they can find.

In the modern world of American healthcare, none of this multi-million dollar hoop-jumping is necessary or even appropriate.  Every accredited specialty training program director already knows exactly what their residents know because they work with them each and every day.  By the time physicians completes their specialty training they'll have been asked tens of thousands of questions by a host of attending physicians in almost every conceivable setting, from the surgery suite to the lecture hall.  Training programs have the ability to hold back or terminate questionable residents at any time.

Gilding the medical lily with endless layers of deliberately esoteric tests and certifications does nothing to improve patient safety or well-being; it simply prevents significant numbers of competent physicians from providing much-needed healthcare services.  It's time for the medical establishment and the general public to decide that high levels of excellent training are far more important than all the testing in the world.

Dr. Perednia is a board-certified physician and author of Overhauling America's Healthcare Machine (FT Press, 2011).  He writes The Road to Hellth blog.