President Obama reminds us that successful green energy startups aren't easy, as illustrated by Solyndra's loan fiasco.  What about Fisker Automotive, recipient of $193 millilon in loans* out of a $529-million DOE credit line?  The product of this government/industry partnership is the four-door performance Karma sedan, aimed strictly at 1% buyers.  So how does that investment look?

Unlike Solyndra solar panels, which are installed out of sight, the Karma is a highly visible consumer product competing in a demanding market.  Plus buyers are loaded with product knowledge, so a Mercedes-Benz S-Class or Audi A8 owner could drive a Karma and judge whether or not the Karma meets or exceeds his expectations.  And unlike with Solyndra, a lack of Karma sales can't be blamed on Chinese government subsidies.

So what's the Karma's editorial buzz?  Based on two brief reviews, it's less than stellar.  Consumer Reports attempted to test one, but due to a technical glitch it was unceremoniously returned to the dealer for repairs.  Oops.

Fortunately, Autoweek published a two-page Drives report that appeared in their February 20 print edition.  For a car that's attempting to put "eco chic" hybrids on the map, Mark Vaughn writes in his opening paragraph, "If all you cared about was design, it would be a raging success even if it never moved."  Yeah, we get that styling sells, but cars are kinetic, and their ultimate sales worth, particularly in the six-figure stratosphere, is how they perform.

Karma green credentials start with a series -- hybrid drivetrain, consisting of a 20-kilowatt-hour lithium-ion battery pack.  When it's drained, a Government Motors 2.0-liter turbocharged Ecotec engine switches on to drive a 150-kilowatt generator, which charges the battery and energizes the electric motors.

Drive location was Las Vegas, and the review revealed several oddities.  The biggest one was test vehicle condition.  I have attended new car press events and know that vehicles are meticulously prepped to make sure that there are no embarrassing failures.

Mr. Vaughn writes, "We got a 30-minute drive around Las Vegas ... in an early production car with a depleted battery pack, so the Ecotec gasoline engine was firing throughout our drive."  One engineering characteristic touted by Fisker is the Karma's "stealth" -- battery power only -- 50-mile range, so a press drive demonstrating that should have been the top priority. 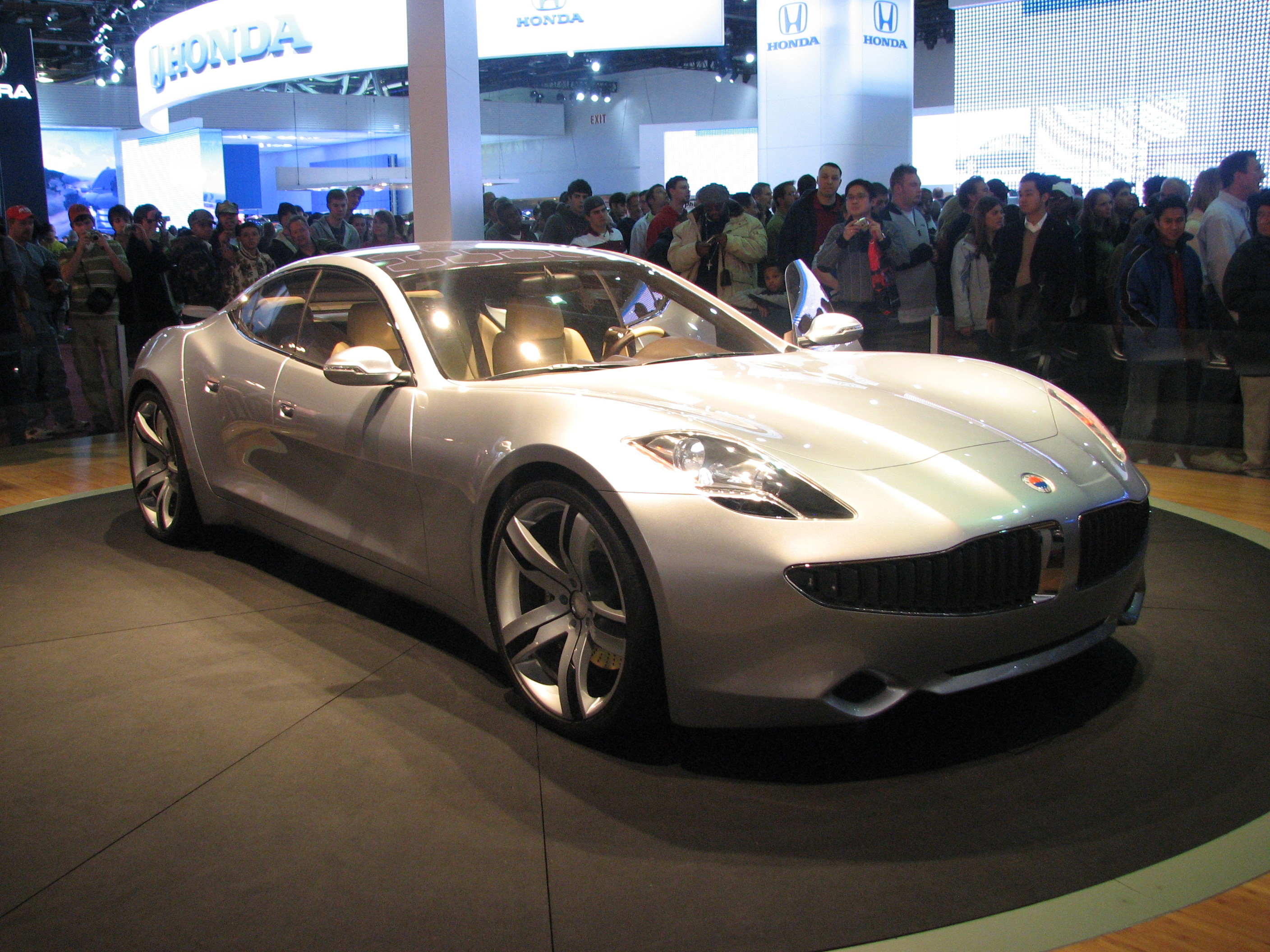 Why would Fisker management even think about letting an editor drive their car, unless they knew it would perform as they claim?  With a half-billion-dollar taxpayer-funded credit line, couldn't they afford to have a backup production car present?

Continuing, the half-hour jaunt followed "east Vegas's sad streets[,]" and then they merged onto I-15, so they presumably were able to cruise at 65 mph-plus.

So what were some of Mr. Vaughn's driving impressions?  Hammering the throttle, "the engine got loud and just a little raspy[.]"  That's followed by, "Several good stabs to the accelerator returned meaningful lunges forward."  He mentions that had the battery pack been functional, the Karma would have delivered "more grunt."  I wonder what the Karma would be like to drive 286 miles from Los Angeles to Las Vegas...and would the experience make a Mercedes-Benz owner  want to trade his car in for one?

While ride quality was described as "smooth and seamless[,]" there was no mention of steering response, brake feel, or seating position, and nothing about how the car behaved at speed or in turns.  Odd.

In closing, Vaughn opines, "We can only hope that the world will come to like eco-friendly powertrains as much as it likes the Karma's eye-candy exterior."  Damn, that praise is a little faint.

Ironically, in the same issue was a Porsche Panamera GTS review.  This direct competitor has a $110K base price and is lighter (4,300 pounds) and faster (0-60, 4.3 seconds).  EPA mileage is 22 mpg, which is very good for this performance level.  Tested in Spain, editors drove the car on area roads, followed by a ride along with a Porsche test driver on the Ascari track.  What was Autoweek's editorial impression?  One clue was that the red Panamera was the cover car instead of Karma "eye-candy."  Next, read the whole thing, but maybe the cover headline tweeted it best: "Yes, a Four-Door Performance Porsche That Just Rocks."

Postscript: According to a National and Legal Policy Center report, the Security and Exchange Commission notified brokers involved in a 2009 Fisker Automotive private offering that charges against them may be filed.  Add that to the crony capitalism involved in this government "investment," and it appears that a lot of money was spent financing a car that, frankly, isn't very competitive.

*the article has been corrected to reflect that Fisker has not borrowed $529 million, but only 193 million out of a credit line available. We thank reader Fred Bialek for poiunting this out.