Throughout 2011, at President Obama's urging, the People's Bank of China let the Chinese yuan rise slightly versus the dollar.  It didn't raise the yuan enough to bring U.S. Chinese trade toward balance, but at least China was appearing to move in the right direction.

But the rise in the yuan stopped on January 1.  Since March 1, China has actually been reducing the price at which the Chinese yuan is exchanged for the American dollar, as shown in the graph below: 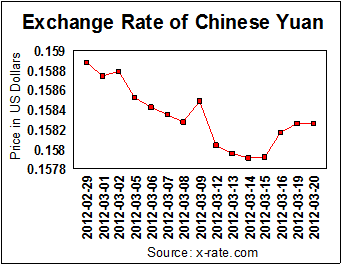 This course-reversal by the Chinese government marks the complete and utter failure of President Obama's trade policy, which has already been reeling from one mistake after another.

Solyndra and several of the other alternative-energy producers that President Obama's bureaucrats chose to subsidize are going bankrupt.  Obama's car of the future, the Chevy Volt, has failed to sell, and now GM is giving electric car and battery technology to China.  The administration's only glimmer of success was that it talked the Chinese government into nudging up the yuan-dollar exchange rate for a while.  But Obama's "speak loudly and carry no stick" strategy was bound to fail.

The media justifies the Chinese government's decision to bring down the yuan-dollar exchange rate by citing reports that China ran overall trade deficits in January and February.  During the first quarter of each recent year, usually in March, the Chinese government encourages its many enterprises to build up their inventories of foreign raw materials.  As a result, China occasionally runs monthly trade deficits.  The only thing new this year is that the inventory build-up came a bit earlier than usual.

A 13 percent volume increase in soybean imports may be partly due to precautionary purchase after drought losses in South America. And the 50 percent year-on-year increase in copper imports is suspicious. Copper can be used a wheeze to circumvent tight monetary policy. Importers get a letter of credit for commodity imports, sell the commodity quickly and keep the credit until maturity.

China imported a record 5.95 million barrels of crude oil per day in February, up 18.5 percent on year ago levels, while copper and iron ore imports were also strong.

So far, China's temporary trade deficit has not yet shown up in the U.S.-China trade data which has been reported only by the Commerce Department through January 2012.  In fact, for 24 consecutive months, China's merchandise trade surplus with the United States has been higher each month than the same month one year earlier.

The Chinese government intentionally produces growing trade surpluses with the United States through currency manipulations and a host of tariff and non-tariff barriers to U.S. products.  As a result, factories in China show profits while those in the United States tend to close.

And China is responsible for only about half of America's trade deficits.  Almost all of the emerging market-economy and oil-producing countries are trying to produce trade surpluses through similar trade manipulations.  The seasonally adjusted U.S. trade deficit expanded in January for the third month in a row, up to a $631-billion-per-year rate.  Since February 2008, 1.8 million American manufacturing workers have lost their jobs, bringing the February 2012 total down to just 11.9 million U.S. manufacturing workers.  The result: a high unemployment rate and a declining median income rate.

Even before the latest dismal statistics, Republican presidential candidates Governor Mitt Romney and Senator Rick Santorum were making Obama's trade record an issue in the coming election.  Neither of them has yet come up with a surefire solution, but they could easily solve the problem by doing what Republican presidents have done in the past -- impose tariffs or quotas in order to bring trade toward balance.

Similarly, when trade got out of balance in 1971, President Nixon invoked the WTO rule which lets trade deficit countries impose trade-balancing tariffs.  His 10% across-the board tariff quickly forced the changes which brought U.S. trade into balance by 1973.

We recommend that the United States invoke the same WTO rule for trade deficit countries that President Nixon invoked in 1971, but instead of imposing an across-the-board tariff, we recommend that the next U.S. president impose our invention: a single-country variable tariff that we call the scaled tariff, which would be applied to just those countries with which we have trade deficits.  After all, why should the United States apply tariffs to imports from the U.K., Brazil, or Canada -- countries with which it has trade surpluses or balanced trade?

We made the case for the scaled tariff in a refereed-journal (The Estey Centre Journal of International Law and Trade Policy).  It would be applied to goods from each country based upon the most recent four quarters of economic data, so as to bring in half of our trade deficit (goods plus services) with that country as government revenue.

We have even put our proposal into bill form.  According to a comment published by a CNN blog, Washington is starting to pay attention.  A commenter identified as G.R.R. wrote:

One idea being batted around D.C. and other places is a scaled tariff. Considering that this is starting to take hold with a number of representatives and senators, it is increasingly likely that it will happen. The tariff would be based on how far out of whack a trade deficit. If this happens, then China will see a 38% tariff against ALL of their items sold in the USA. Interestingly, WTO allows for this once your trade is off by more than 10%. India would see about 22% tariff, so, it would be easier for them to lose about 11% of the USA trade, while China will have to lose 28% of their trade. Big hit.

On March 14, the Bureau of Economic Analysis published preliminary 2011 trade statistics for goods and services with some of America's major trading partners, making it possible to calculate the scaled tariff rate for these particular countries.  The following scaled tariff rates upon imported goods would be applied in order to take in 50% of our trade deficit (goods plus services) as revenue:

The tariff rate would be based upon the size of the trade deficit and would be updated each economic quarter, based upon the most recent trade data.  Each country would be able to reduce our tariff rate on its products by taking down its barriers to American products and increasing imports from the United States.

Despite our "free trade agreements," it would be appropriate to apply the scaled tariff to South Korean and Mexican imports, since both countries buy massive amounts of foreign currencies in order to manipulate exchange rates.  Federal Reserve Chairman Ben Bernanke reported in a November 2010 speech (see Figure 8) that between September 2009 and September 2010, Mexico devoted 3.64% of its GDP to currency reserve accumulations, while South Korea devoted 4.24%.

If the scaled tariff were applied, then the following events would occur:

In the first year of the scaled tariff, the federal government would take in hundreds of billions of dollars of additional revenue, which would help balance the budget.  As the scaled tariff would bring trade toward balance, that revenue would be replaced by increased revenue from higher American incomes.

None of the usual economic arguments against tariffs applies to the trade-balancing scaled tariff:

Also, the scaled tariff would solve the problem of how to bring the federal budget into balance without causing a recession.  Dr. Valerie Ramey, Professor of Economics at the University of California San Diego, recently calculated the amount of economic stimulus that results from increased government spending.  She concluded:

For the most part, it appears that a rise in government spending does not stimulate private spending; most estimates suggest that it significantly lowers private spending... The results imply a multiplier on total GDP of around 0.5.

In the other direction, balancing trade would produce about $630 billion worth of additional private output in the American economy and create about 5 million manufacturing jobs in the private sector (assuming value-added per job equal to $125,000 per worker to produce goods formerly imported)!  There would also be higher American incomes from providing services to these manufacturing workers.  The U.S. would experience real multiplier effects.

Thus if the next president were to balance the federal budget and balance trade,  there would be an economic recovery like the one we experienced after WWII.  The American economy would once again be the envy of the world.

And if, at the same time, the next administration encourages domestic oil production and the substitution of natural gas, of which we have more than a century's supply, for oil in cars, trucks, and buses, the sky is the limit!

The authors maintain a blog at www.idealtaxes.com and co-authored the 2008 book Trading Away Our Future: How to Fix Our Government-Driven Trade Deficits and Faulty Tax System Before it's Too Late, published by Ideal Taxes Association.