To hear the president and Democrats talk, you'd think that Big Oil was sucking the Treasury dry with huge subsidies.  Almost a year ago I wrote about the federal government's "subsidies" to Big Oil.  I said then, "They are all tax 'breaks'... about $4.3 billion per year -- about 0.2% of this year's deficit and enough to fund about 10 hours of current US government spending."

Just to be clear, that $2.5B was not just for Big Oil, but also for Big Coal and Big Gas: all fossil fuels.  Here, more exactly, are those subsidies, in the CBO's words.

I can't say I understand those "subsidies."  Is exploration not supposed to be a cost of doing business for an oil company?  Who is to say these expenses are not legitimate costs?  But let's take the CBO's word for it that these are, for some reason, "subsidies."

Let's compare those subsidies to other energy subsidies. The CBO has a chart. 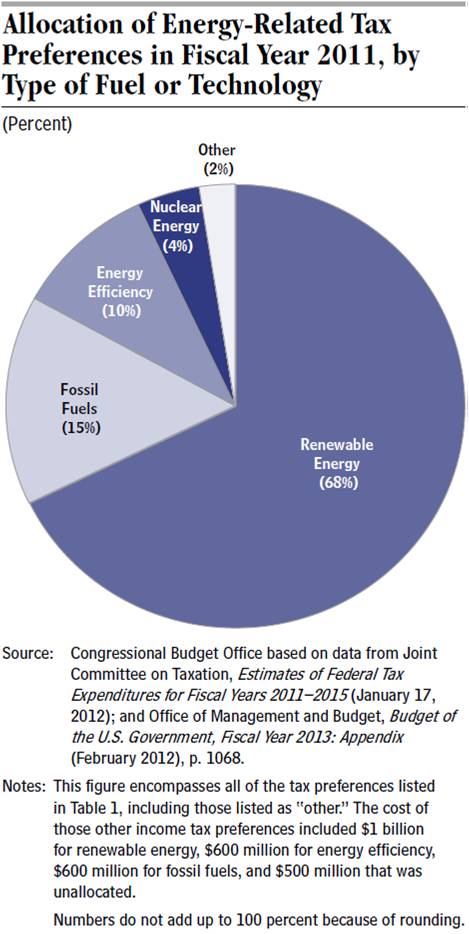 "Alcohol fuels," which include ethanol, took $6.1B of tax subsidies, or more than twice as much as oil, gas, and coal combined.

When did this start happening?  The CBO has another chart. 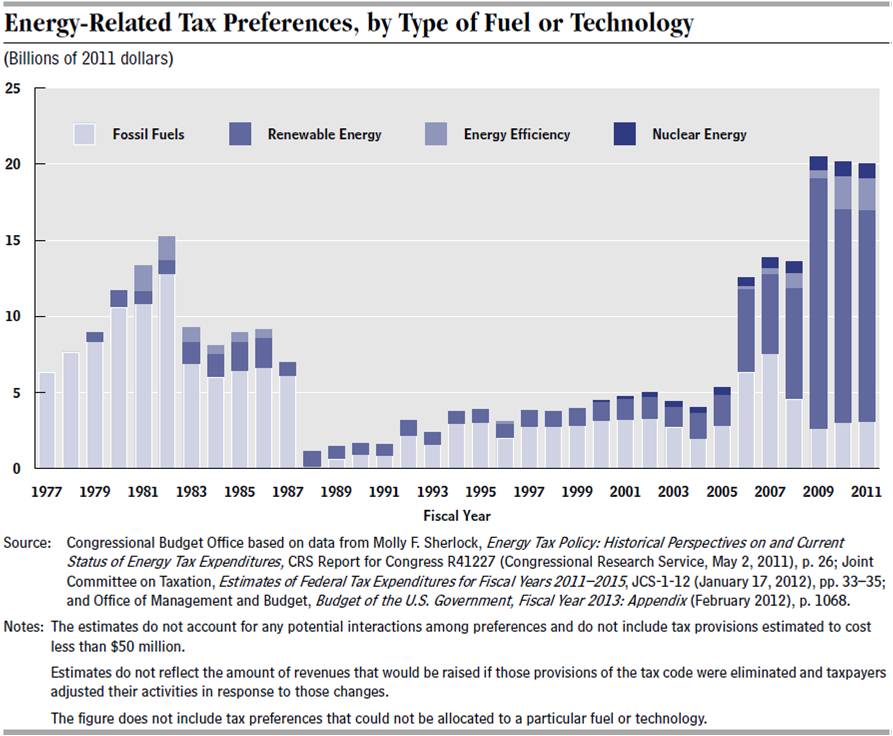 The explosion of energy subsidies seemed to coincide rather neatly with Democrats taking over both the House and Senate in 2007, and then the presidency in 2009.  (That darned Reagan cut subsidies for fossil fuels to nothing.  In Reagan's last year, the small amount of tax subsidies for energy was all going to renewables.)

You know who else likes subsidizing alternative energy?  George Soros.  He wrote this in January 2009:

The American consumer can no longer act as the motor of the global economy. Alternative energy and developments that produce energy savings could serve as a new motor, but only if the price of conventional fuels is kept high enough to justify investing in those activities. That would involve putting a floor under the price of fossil fuels by imposing a price on carbon emissions and import duties on oil to keep the domestic price above, say, $70 per barrel.

Somehow, George got his wish for high fuel prices even without a Copenhagen-like global Cap & Trade system.  When he wrote that, oil was only about $40 per barrel.  Just one year later, it was consistently over $70 per barrel, George's magic threshold -- as if delivered as a Christmas gift.  And this year it's been about $100 per barrel.  Good times: a 150% increase in crude oil prices in the three years since George Soros called for higher fuel prices, perfectly coinciding with the three years of Obama's presidency.

We could begin with an immediate carbon tax that would penalize those with the largest carbon footprint - big corporations - while also making a case for the elimination of coal production and expansion of alternative energy sources.

And who else?  Presidential candidate Barack Obama said this in 2008 (via Jake Tapper at ABC):

So if somebody wants to build a coal-powered plant, they can. It's just that it will bankrupt them because they're going to be charged a huge sum for all that greenhouse gas that's being emitted. That will also generate billions of dollars that we can invest in solar, wind, biodiesel, and other alternative energy approaches.