Reports of the Tea Party's Death are Greatly Exaggerated

According to some in the press, the Tea Party is all but dead.  Or is that just wishful thinking?

On February 16, 2012, approximately two hundred San Francisco Tea Party members stood outside of the Nob Hill Masonic Center in San Francisco to protest Barack Obama.  Standing behind the barricades next to the Tea Partiers stood a motley crew of Occupiers, pot legalizers and environmentalists, also protesting the president.  The press was all over the place.  After all, Obama was in town.

You couldn't miss the Tea Partiers -- they had about 100 bright red foam fingers that read "NOBAMA 2012."  The protest and accompanying fingers were inspired by SF Weekly journalist Erin Sherbert's jab at Jan Brewer on January 27, 2012 entitled "Obama Coming to San Francisco, Where Nobody Will Wag Their Fingers in His Face."

The San Francisco Tea Party viewed it differently.  They considered it a prime opportunity to wag their fingers in the face of the man who can celebrate being the first downgrade President, the overseer of one of the longest-running periods of unemployment over 8% since the Great Depression and the man responsible for our $15 trillion deficit, record spending, and a stalled economy yielding consistently lower GDP and tax revenues.  And that's just the tip of the iceberg.

This finger waggin' at Obama -- for driving the economy over the cliff and watching it plummet towards the bottom at lightning speed -- is long overdue. 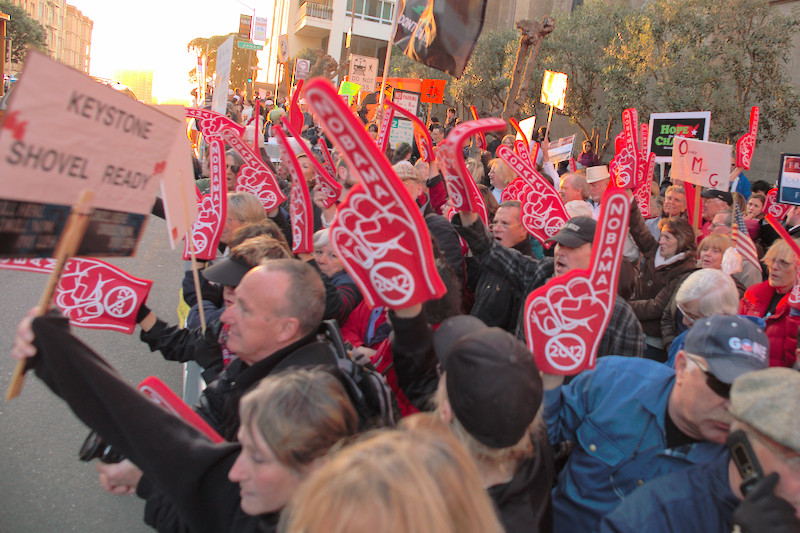 Fueled by fear they won't be able to retire, sell their homes, educate their kids, afford top notch health care or the cost to drive to work; and motivated by increasing levels of anxiety that their children won't have the same opportunities their parents had, Tea Partiers came out in droves this chilly San Francisco night.  They stood for hours becoming hoarse from chants while being forced to inhale the carbon-footprint unfriendly, air polluting fumes wafting over from the Occupy Wall Street and pro-pot gang.

All this to protest the President and let him -- and the 3000 adoring fans who paid $100 per ticket and the 90 who paid $38,500 per ticket -- know that while San Francisco might be the most progressive city in the country, it isn't rolling out the red carpet for Obama anymore.  Visit California with solutions to our problems -- i.e., getting the government out of the way of growth, lowering regulation, taxes and spending -- then there's something to shake hands about; then right and left can unclench fists and hold hands.  But, come here with your hand out, dipping into the cookie jar yet again, and that's just going to get you a good old-fashioned finger waggin'.

Ask any Tea Partier and just about any voter who's been paying attention:  This President is out of touch, out of control, out of money and out of time. 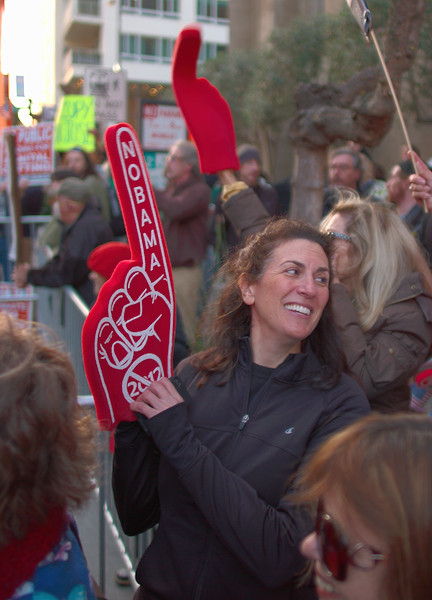 The San Francisco Tea Party was such a noticeable presence outside of the Masonic Center that the SF Chronicle editors saw fit to put the Tea Party protest on the front page of the newspaper.  Reporters Joe Garofoli, Carla Marinucci and Emily DeRuy are to be commended for their truthful account of the evening and, dare I say it, fair and balanced journalism.

But fie on the vast majority of reporters who either inhaled way too much of the Occupy Ganja and experienced an alternate reality from the one the rest of the world experienced or intentionally left out one important fact about the collection of protesters at the Nob Hill Masonic Center -- there were 200 organized, animated, visible and very loud Tea Partiers.

The LA Times's Kathleen Hennessey had this and only this to say about the opposition that night:

Protesters also lined up outside the Nob Hill Masonic Center. Many carried signs calling for the legalization of marijuana.

This Sacramento Bee blog posted by David Siders minimized the size of the Tea Party crowd falsely claiming. "If it was only the Tea Party across the street, the protest, however spirited, might have been small."  He later added, "Though apparently outnumbered, the Tea Party supporters were loud."

Loud, yes.  Outnumbered?  Not even close.  The Tea Party was at least evenly matched by their leftwing opposition and likely outnumbered them.

Even worse, despite a considerable media presence interviewing and videotaping Tea Partiers, local network station newscasts failed to mention that 200 Tea Partiers greeted Obama.  With the exception of a brief mention on ABC, the San Francisco Tea Party was effectively excised from network news reports that evening.

This was such a blatant omission that it indisputably illustrates the control the leftwing media has over what news is disseminated and its willingness to manipulate the information flow.  But marginalizing the Tea Party is nothing new.

Time magazine's 2011 Person of the Year magazine cover went to "The Protester" and featured, among others, the protesters of Occupy Wall Street, Tunisia, Egypt and Libya.  The pictures at their site feature protesters often masked, dressed in black and with menacing looks.  You will also see the proverbial fist of the far left, unions, socialists and Marxists so ubiquitous at OWS protests.

Tea Partiers were not included.

In fact, the Tea Party was runner up for Time's Person of the Year in 2010 (losing to Mark Zuckerberg of Facebook fame) despite the millions in April 2009 who attended thousands of tax day rallies across the country and protested ObamaCare en masse that summer and fall.

What is so amazing about this right wing phenomenon is that millions of Americans who had never protested a day in their lives took to the streets for the first time.  Contrary to their counterparts on the left, they weren't paid or bused in to do it.  They didn't get a day off work to attend.  They just got to a point where they could no longer ignore the reality that their elected representatives were not listening to them and the only thing left to do was get off the couch and agitate.

Millions of Tea Partiers clad in red, white and blue, singing patriotic songs, with fingers pointed at a government addicted to spending, were blatantly ignored by the press in 2009, 2010, 2011 and still, in 2012.  To make matters worse, when orchestrated and well-financed leftwing Occupation protests erupted around the world in 2011 -- accelerated by their cronies in the tech world -- they made the front page while the Tea Party continued to be defamed as racist, fascist, homophobic, anti-government whack jobs.

The praise went instead to openly anarchist, Marxist, out-of-control squatter-Occupiers, dressed in black and inciting class warfare with their raised fists and masked faces.

Here is yet another irony.  Many of the protesters lauded by Time magazine were rebelling against oppressive governments.  The Tea Party was and still is rebelling against the oppression of our local, state and national governments for taking more of the fruits of our labors, restricting how we earn our money, controlling what we do with our property, limiting the free market and suppressing individual liberty.

Contrast that with the Occupiers, whose prime mission is to enable the government -- in the form of a planned, centralized economy -- to take more of our property and liberties and transfer them to the so-called 99% who are really the 47% who don't pay income taxes -- eliminating the source of all oppression: the free market.

If we are celebrating the rise of The People against tyranny and oppression around the world, then the Tea Party -- not Occupy Wall Street -- should be sharing the stage with Time's "The Protester."

And if we are warning the American public about impending economic doom and the usurpation of our G-d given rights, protected in the Constitution from an oppressive, tyrannical government, then we should be making headlines every time we take action.

In Monty Python's "The Holy Grail" there is a scene where they are going through the village with a cart collecting the dead.  In answer to the call "Bring out your dead" one man approaches the cart with a body slumped over his shoulder.  The body exclaims "I'm not dead."  The response? Hit the guy over the head and make him dead.  That is precisely the game here.

The Tea Party isn't dead yet but the leftwing controlled media will continue to whack it over the head by maligning it, reporting negatively and dishonestly about it or just plain ignoring it, in the hopes of eliminating the Tea Party from the political narrative. That showing of 200 struggling Tea Partiers on a chilly San Francisco night -- some having to pay $40 for parking in addition to $4/gallon gas and bridge tolls --  is a rallying cry to the rest of conservative America.  And to the left?  We're not dead yet and don't even think about whacking us over the head with a club.