Warning: mysqli_free_result() expects parameter 1 to be mysqli_result, bool given in /var/www/html/americanthinker/admin/common/functions/func.general.php on line 126
 Project Obama: A Puppetmaster or a Puppet? - American Thinker
|

Project Obama: A Puppetmaster or a Puppet?

Is President Obama the mastermind of the radical-left movement or merely its symbol?  Actually, it doesn't matter.  What matters is that the socialist project, which had been nearly a century in the making, in 2008 came to fruition, winning the presidential election and seizing power.  And whether the face of the movement, Barack Obama, is indeed its leader or just a puppet of a revolutionary cabal is purely academic.  Still, trying to divine the truth is an intriguing proposition.  So let me take a stab at this intellectually stimulating game.  And no, I'm not going to indulge in guesswork, trying to penetrate the veil of mystery surrounding Obama, a man without a past.  My intention is to arrive at an answer by induction from what is a matter of public record and what is in plain view.

The more one watches the 44th U.S. president, the more certain it becomes that he is not the person David Axelrod and Co. successfully foisted on the public during the 2008 election campaign -- that he is, in fact, the Wizard of Oz, the little man behind the curtain, an empty suit -- that the image of a giant who bestrides the world, orders the oceans to recede, and heals the planet is a fruit of relentless propaganda and a figment of his sycophants' imaginations.  There are certain personality traits a true revolutionary leader must possess, yet Obama exhibits none of them (other than perhaps the perfect crease of his pant leg, deemed by some to be an essential condition of presidential greatness).

The character profile of a true revolutionary leader, a Robespierre, a Lenin, or a Hitler, is well-known.  The revolutionary giant is a person of titanic energy and vigor, seething with implacable hatred for the status quo (the talent for hatred is the real key to the revolutionary character); a man (or, on rare occasions, a woman) obsessed with power to such an extent that everything else pales into insignificance.  Characteristically, many revolutionaries are ascetics indifferent to hedonistic pleasures.  Power for power's sake, not its perks, is the real fuel they run on.  Indeed, sybaritic inclinations are the Achilles heel of many lesser revolutionary lights who, finding themselves in the lap of luxury, quickly go soft, lose their edge, and are brought down by leaner and hungrier rivals.

Furthermore, the revolutionary giant is typically a person of intellectual distinction and enormous capacity and taste for work.  He is also tough-minded, highly disciplined, and possessed of an indomitable will.  Finally, he must be charismatic and able to bend people to his will by force of his magnetic personality.  It took Hitler just one face-to-face conversation with a bitter enemy, Joseph Goebbels, to win him over once and for all and instill in him a dog-like devotion to his master that Goebbels never lost 'til his dying breath.

Does Barack Obama exhibit any of these qualities?  Alas for his admirers, he fails on all counts.  His limp-wristed demeanor, more typical of a world-weary courtier than a king, bespeaks indolence rather than energy.  What we know about his schedule is certainly no evidence of a workaholic.  Endless hours spent on the links, a net of three months over the last three years, so that his caddy has far more face time with the president than any member of his cabinet.  Frequent, prolonged vacations in posh spots.  Regular, come-hell-or-high-water parties at the White House, rubbing shoulders with the rich and famous.  Sybaritic habits and expensive tastes in food (Wagyu beef, which sells for upwards of $150 per pound, is said to be a particular favorite) matching his spouse's exorbitant taste in clothes.  Lack of intellectual curiosity (even his associates and allies admit that he is an intellectual lightweight) and fixation on middle-brow TV entertainment and sports.

Obama is sloth incarnate, known for a passionate abhorrence of steady, nose-to-the-grindstone work and an equally passionate love of leisure.  Whenever possible, the president shirks the duties of his office.  He detests being in the White House and never misses an opportunity to escape its confines.  How much time does he devote to work?  And what is his definition of work?  Flying about the country with a set of teleprompters to deliver endless variations on the same tired, stock-in-trade campaign speech -- and that's about it.  Come to think of it, can anyone imagine a true leader leaning so heavily on the teleprompter like a convalescent patient on his walker?

But what about his grand projects, the Stimulus and ObamaCare?  Aren't they evidence of persistent effort?  But he never presented the actual bills, allowing his allies, Harry Reid in the Senate and Nancy Pelosi in the House, to do all the heavy lifting.  He is just fine with the Senate refusing to pass a budget for almost three years.  Budget matters are so-o-o boring...lonely green-eyeshade fanatics like Paul Ryan like to deal with them.  On other big issues, like the appallingly burgeoning national debt, he would grandly appoint a bipartisan commission, creating a simulacrum of activity, only to blithely ignore its recommendations.  In politics, outsourcing is not work; it's avoidance of work.

True leaders are serious people; they are too focused on their main goals to indulge in childish pranks or ostentatiously flaunt utter disrespect for good manners.  At a debate during the primary season in 2008, Obama flipped off Hillary Clinton while pretending to wipe sweat off his brow.  It was so surreal that I rubbed my eyes, refusing to believe the evidence.  But then he did it again -- to McCain during the general.  One instance may have been an accident (however, try to replicate the deed and you'll see how inconvenient it is), but two dispelled all doubt.  The candidate for the highest office in the land was playing to the gallery in the 'hood to burnish his "street cred."  It was a typical act of ghetto bravado -- a street tough dissing his opponent and asserting his superiority, the politician's equivalent of trash talk so prevalent in Obama's beloved NBA.

Upon arrival in Arizona last week, he was met on the airport tarmac by Governor Jan Brewer and immediately launched into a tirade, castigating Brewer for some unflattering remarks about him in her year-old book, Scorpions for Breakfast.  The governor tried to remonstrate with the president, but he cut her off mid-sentence, turned around, and walked away.  No true leader would be that thin-skinned and small-minded, let alone rude -- particularly on camera.  But Obama didn't care.

All true leaders rise through the ranks, honing their martial skills in incessant combat on all fronts -- now smiting the enemies on the right or on the left, now bracing the timid among their supporters, now crushing dissent among their followers -- all the while reaffirming their leadership positions.  In short, they fight their way to the top.  Has Barack Obama ever fought a single fight in his life, other than a one-on-one with an awestruck former NBA star?  He was propelled to the top, his opponents knocked off by any means necessary to clear the path for Obama.  True leaders are extremely combative and never miss a chance to mix it up with their enemies.  Not Obama.  He always tries to avoid face-to-face confrontation, insulting his enemies from a safe distance.  Is an instinctive inclination to avoid a fight and to vote "present" the mark of a true leader?

All true leaders are passionate, full of piss and vinegar.  Obama, on the other hand, is clearly a cold fish, totally dispassionate about everything around him, including his own policies.  Who can forget his glassy-eyed indifference as he pretended to listen to Paul Ryan trying to explain to him fiscal reality -- before unceremoniously cutting off the uppity congressman?  This at a time when the centerpiece of his policy was hanging in the balance.  He grows passionate only when discussing basketball.  Lately he has been showing signs of life, bemoaning the evils of capitalism.  But even his animation looks manufactured, like the movements of a wind-up doll.

All true leaders are good actors, feigning whatever sentiment is warranted by the circumstances.  Whether or not Obama is endowed with acting ability, he disdains the need to pretend that he cares.  The day the Palestinian-American Major Nidal Malik Hasan shot up Fort Hood, killing 13 and wounding 30, Obama was scheduled to give another of his speeches.  As usual, the President arrived late, dawdled a while, finally launched into an interminable acknowledgement routine followed by a shout-out to an Indian chief in the audience, and only then, three minutes into his speech, nonchalantly, almost as an afterthought, mentioned the tragedy, hastily admonishing his listeners not to jump to conclusions about the motives of the assailant (true, he ecstatically shouted "Allah Akbar" as he pulled the trigger, but maybe he was a right-wing agent provocateur agitating against the religion of peace).  Any politician worth his salt would fake concern and grief.  But not Obama, who apparently doesn't see any point going to the trouble.  Of course, he relies on the complicit mainstream media to cover up for him, but is it a mark of a leader mindful of his image?

So given his obvious unfitness for the job, how did Obama manage to climb to the very top?  My guess is that he was spotted early on, judged to be a promising prospect (good looks, great voice, gift of facile dissimulation, right ideological credentials) made particularly attractive by the notable paucity of competition, and then carried all the way to the White House with minimum effort on his part.  Of course, once there, surrounded by brown-nose courtiers whose well-being hinges on presidential favor, he must have succumbed to megalomania, to which, by all accounts, he has long been susceptible.  So maybe he even tries, from time to time, to steer the ship of state all by himself.  But I doubt it.  He is so patently bored by statecraft and so unaccustomed to any kind of exertion other than workouts that it is a stretch to suppose he would sacrifice his leisure on the altar of presidential duties.

But even if it's true, it doesn't change the underlying fact that he came to the presidency as a puppet, not a puppet master.  With not a single trait of a true leader in evidence, he is not the engine of the radical left juggernaut, but merely its hood ornament. 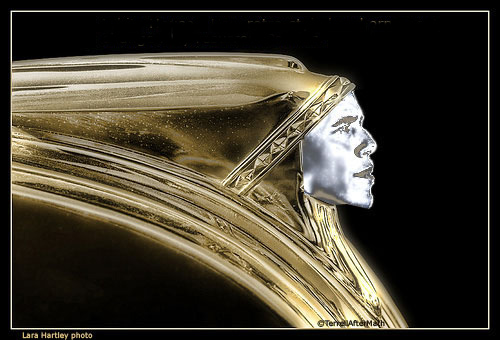 The image of a colossus that the elites have forged in their own minds has very little to do with reality and everything to do with their fashionable radicalism, racial guilt, and servile infatuation with power.

Image by Richard Terrell of Aftermath