Warning: mysqli_free_result() expects parameter 1 to be mysqli_result, bool given in /var/www/html/americanthinker/admin/common/functions/func.general.php on line 126
 Voguing for Obama - American Thinker
|

"Fashion is what you adopt when you don't know who you are."

At the top of America's fashion pyramid is Anna Wintour, editor of Vogue and presumptively the model for the devil's role in The Devil Wears Prada.

Wintour's word means life or death to designers, retailers, and those who've invested in these important businesses.  And I'm in no position to argue that she doesn't earn their respect for her sense of style.  Her political sense is another matter altogether, however, and there her decisions are regrettably ill-considered.

Shortly before Syria's President Assad started slaughtering his own people because they dared to want a change in government, Ms. Wintour ran a puff piece on Assad's wife, full of soft-focus spreads of the happy Assad family at home.

The article called Mrs. Assad the "freshest and most magnetic o

Although she hasn't said Michelle Obama is also "the freshest and most magnetic of first ladies," Mrs. Wintour's unerring eye has consistently supported Michelle and her husband, the president.

The 2012 Presidential campaigns are well under way, and it looks like President Obama will have the most fashionable campaign - EVER. Twenty-two designers have partnered with the Obama campaign initiative Runway to Win, for which designers will create merchandise to help raise funds for the President's 2012 Reelection Campaign.

The Obamas have had a close relationship with the fashion community from the beginning, largely thanks to First Lady Michelle Obama'skeen fashion sense, which has catapulted several designers, such as Jason Wu and Rachel Roy, into the spotlight. Anna Wintour has also been a driving force behind this marriage of politics and fashion, having hosted several fundraising dinners for the Obamas in her West Village home.

And in true Vogue style, the editor-in-chief will co-host a shindig with Scarlett Johansson in February, which is expected to draw a very fashionable crowd including designers, models, actors, and other prominent celebrities. The event is headed by Sylvana Ward Durrett, a director of special events at Vogue, who also organizes the Met ball. If that is any indication, it will be a truly magical evening!

The Runway to Win e-commerce site launches this Thursday, January 12, and will feature items from Marc Jacobs, Tory Burch, Alexander Wang, Jason Wu, Joseph Altuzarra, Rag & Bone, and many more. Whether you're a Republican, Democrat, or Independent - you will not want to miss these limited edition items!

The blog Michelle Obama's Mirror picked up on this planned Runway to Win campaign and contrasted it with a previous "fashionistas for Obama" event:

Campaigns have typically offered hats and T-shirts for sale, but normally they are blandly decorated with simple campaign logos. The Obama campaign, for example, already sells clothes, like a $55 hoodie and new "State of the Union Watch Party Packs" for $25 that include yard signs and buttons. The Runway to Win plan takes that whole idea to a new, Fifth Avenue level and is aimed at creating a special fashion cachet for the campaign.[Check out the top political events of 2011]

I know this campaign sounds similar to the 2008 fashion-designer effort to support Big Guy: "Runway To Change". Butt it's totally different - hence the new name: "Runway To Win". As some cheeky wag at Huffpo pointed out: "the tweak of one word, we think, speaks volumes as to the difference between this Obama campaign and last." We think so too. 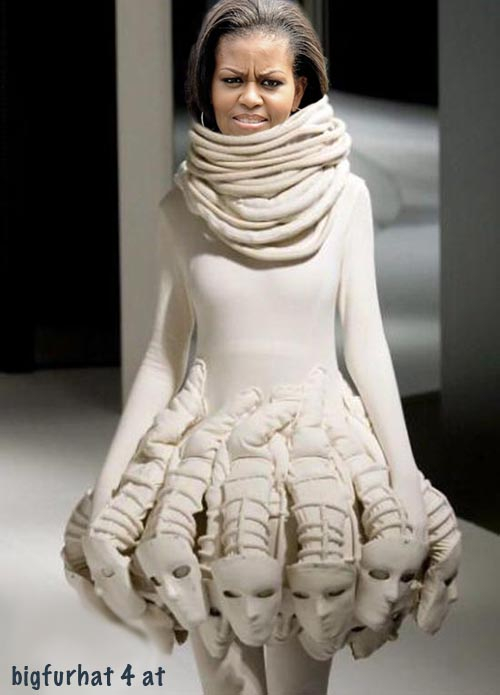 Another difference between this Obama campaign and last is that this time around, it's getting harder to raise campaign money, and the event is more important to Obama:

President Obama has attended twice the number of fundraisers as [as President Bush.] [Obama] attended 58 fundraisers for his reelection campaign since January[.] By comparison, President George W. Bush ... attended 29 fundraisers[.]

In other words, in order to raise less cash than Bush, Obama had to attend twice as many fundraisers.

So why is Wintour working so hard to secure the president's re-election?  Surely by now her advertisers are feeling the economic pinch of his failed economic policies.

Perhaps it's simple: Anna does not realize that this is not Europe, and Obama cannot help the industry as she wishes he could by regulating when apparel retailers can conduct annual sales and otherwise change the retail rules to conform to European models.

At a Tuesday "town hall" meeting hosted by the Council of Fashion Designers of America, designers like Donna Karan and Elie Tahari lamented steep markdowns that have plagued profits since last fall, The Post's James Covert reports.

"Could someone lead a committee that would make ground rules for retailers when the discounting starts, and then all the retailers can agree to it?" Wintour asked.

When CFDA President Diane von Furstenberg pointed out, "That's illegal," Wintour said: "Is that something we can change? We have friends in the White House now."

Perhaps Anna's reading of Solyndra and the disposition of the Stimulus funds has persuaded her that in this administration, "friends in the White House" does trump any law after all.

For followers of Michelle's fashion choices, you will no doubt be delighted to learn she now has her own Twitter account, where you can let her know exactly how much you appreciate her very expensive, very fashion-forward garb.  The very first tweet invites your correspondence: "We're excited today to launch @michelleobama as a new way for you to connect with first lady Michelle Obama and the president's campaign."