The Angel Chorus in Judeo-Christian Civilization

"Good night, sweet Prince," says Horatio at the climax of Shakespeare's Hamlet, "and flights of angels sing thee to thy rest."

It is a glorious sentence, a golden nugget of Western civilization. Horatio's farewell to Hamlet evokes a world in which Hamlet's tormented soul, after avenging his murdered father, falls dead and ascends to Heaven glorified by a chorus of angels. That is a remarkably humanizing image, one in which Hamlet gives his own life to set things right, and the very heavens celebrate the justice of his cause. Life on earth may be full of injustice, but in the Western imagination truth and right prevail in the end. You may not believe that, but for three thousand years it was an immensely humanizing way to see the world.

In Western tradition it is Hamlet's inner being that matters, his soul. Until the mid-20th century the English language used words like "soul," or "dear soul," to address people in everyday 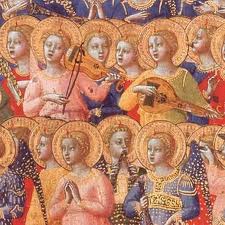 conversations. You can still read it in Agatha Christie mysteries of the 1940s. Addressing other people as "souls" was a simple country habit, but one that invoked worlds of sympathy and mutual respect. The trendy Left celebrates Buddhism for similar expressions, like the respectful greeting "Namaste." (I greet the soul in you). That is important; but it's just as important to know that the same idea dwells at the heart of our own culture.

The idea of a unique inner being, the human soul,  flourished from the start of Western culture, beginning with Plato in Greece and the Biblical world of Israel. The soul is what makes each of us more than so many pounds of flesh. It makes humans infinitely valuable, free souls who make moral choices, as Hamlet did, even at the risk of their lives.

Our "post-modern" professors like to sneer at that Dead White Man's philosophy, but they have nothing nearly as humane and life-affirming to offer. Post-modern  philosophers like Peter Singer treat human beings as utilitarian walking puppets; in their minds you can kill human babies if they don't meet some standard of utility. That is not just a dystopian fantasy. In socialist medical monopolies, human lives are literally translated into dollars and cents, because socialism cannot allow each individual life to have a transcendent meaning. Socialism is dehumanizing, because Karl Marx assumed a primitive kind of materialism back in 1848, and they never change the dogma. They are the most ideologically stuck people in the world.

Following Britain's National Health Service (now brought to you by Obama), our lives will be counted in "QALYs," the amount of medical money our lives are worth, depending on our age and state of health. QALYs are the statistical guess of the number of years you have left of "quality" life. The State will decide whether your life has good enough quality to keep you alive. If you are in pain or depressed, your QALYs go down. If you are old and ill, your QUALYs go down again. If you are ill, old, and in pain, you are worth less and less.

This is not a philosophy of hope but the worst kind of dehumanization. That is what people like Obama, Robert Reich, and their ilk believe about you.  Your life depreciates like an old car --- unless you are politically connected. It is an ice-cold way of thinking about human beings, the very opposite of what our Western traditions tell us.

Hamlet's angel flight comes from (whisper, whisper) Jacob's Dream in the book of Genesis (28:10-22), where Jacob wrestles with an angel (divine messenger) and is at last given the name (whisper, whisper) Israel.  Sounds familiar?  Israel is Hebrew for "God prevails,"  which sounds like a religious idea, actually. The most famous angel chorus today appears in the Christian Bible in places like the Gospel of Mark.  But Islam also harks back to the legend of the Archangel Gabriel appearing to Mohammed and dictating the Koran, word for word.

The origins of the angel chorus probably go back even earlier to Egypt and Sumer, where the soul was believed to travel after death with the heavenly Sun to face divine judgment, followed by immortal life among the gods.

All the  post-posties might sneer at Western culture, but our ancestors thought it was right and proper. Their lives had far more pain and troubles than our own, but they believed in the transcendent value of human beings. The angel chorus isn't just an old, sentimental picture; it conveys an extraordinary philosophy of life.

In Western art the angel chorus appears all over the Renaissance and the High Middle Ages. It runs through Raphael and Michelangelo. It is  in the daily psalms and prayers people sang and whispered for thousands of years.

We live in a secular age,  cut off from our own culture. That's why it is good to recall that the art, music, architecture, and narratives of past generations were brimming with singing cherubs.  If you believe that others have inner souls of infinite value, you will treat them differently. History is full of cruelties, but it makes a difference when such things are cast in a transcendental philosophy of life.

It is in music that the angel chorus can still reach us with undiminished force.  For 99 cents you can buy a choral movement from iTunes or Amazon, performed by the best singers in the world. There are cherubs (often children) singing in every choral Mass from the Renaissance to Bach and Mozart, in the Romantics, in operas, in children's choirs, concertos and symphonies going well into the 20th century.  If you like classical music you can hear angels riffing wherever a composer can slip them in.

Even purely instrumental music, like Dvorak's magnificent cello concerto, follows the narrative of an angelic ascent to heaven. Beethoven's Ninth Symphony has a final choral movement about the brotherhood of Man  marching (naturally) to heaven, and Mahler's symphonies keep coming back to a child singing about "das himmlisches Leben" (heavenly life).

If classical music is not your thing, this season you can hear it in Handel's Messiah:

"And suddenly, there was the heavenly host

Now that's twenty centuries of Judaism and Christianity singing out --- and Islam, too, in its more peaceful varieties.

I'm not a conventionally religious person, but I love the way music and art go straight to the heart. It makes no difference what you believe. The music speaks more clearly than words ever can, and if you can't understand your own music and art from thousands of years of your own civilization, you haven't lived to the full. Chinese calligraphy and Indian dance aim to communicate similar feelings, because great civilizations  reach for the same heights.

On our campuses all the trendy ignoramuses sneer at Western Civ, passing on their own ignorance and contempt to generations of young students. Yet it  is the West that has preserved the value of individual human beings, and it is the West that transformed individual freedom into a vast creative force that is still improving our lives, under names like "free markets," "inventions that make life better," "fundamental scientific discoveries," "the age of exploration," political liberty, free speech and free thought, freedom of religion and conscience -- all products of the Western Enlightenment. The Enlightenment gave us the Declaration of Independence and the Constitution, by far the most humane and practical political statements ever produced by Western Civ.

Individualism is the key to Western creativity, to our unsurpassed productivity, and to the simple privilege of being left alone.  All the creative work of the last 500 years come from stubborn individuals, from Michelangelo to Bill Gates.

In the end, William Shakespeare valued human souls far more than the post-modern professors of the left. Our humane values will survive today's trendy rabble rousers, just as they survived the Bolsheviks and Hitler.  We will wave goodbye to the post-posties as they are left in the dust.Then maybe we can relax to some wonderful music.