Warning: mysqli_free_result() expects parameter 1 to be mysqli_result, bool given in /var/www/html/americanthinker/admin/common/functions/func.general.php on line 126
 Oprah and the Obesity Epidemic - American Thinker
|

Oprah and the Obesity Epidemic

Data released last week by the Centers for Disease Control and Prevention (CDC) contains good news and bad news.  The obesity rate in the U.S. has leveled off, but 35.7 percent of our adult population is obese.  That's about 78,000,000 Americans.

When I was in college, there were obese people on campus at the University of Georgia where I went to school, but they were the exception.  College women, in particular, were concerned about their figures, and you didn't see many overweight women on campus.  That was in the late 1960s and early 1970s.  Today, if you walk around any college campus, you'll find that women who are not overweight stand out.  Something dramatic happened.

Using terminology that Malcolm Gladwell introduced in his book The Tipping Point: How Little Things Can Make a Big Difference, at some point being overweight morphed from a contagion to an epidemic.  I don't know exactly when it occurred, but at the University of Virginia, I knew it had happened when women in my leadership classes routinely wanted to do projects on Oprah Winfrey.  There is no question that Oprah influences lots of people -- particularly young women -- and the way she touches their lives is difficult for most men to understand.

I used to tell my students that women are bellwethers in our society.  If their attitudes change, men's attitudes quickly follow.  Oprah is a sort of cult hero because she seems to have it all.  She's rich.  You may not know this, but Oprah's net worth is more than a billion dollars.  She runs her own company, and The Oprah Winfrey Show that ran from 1986 to 2011 was just one of the many programs and products it has produced.  All of the women in my classes knew intimate details about Oprah's life because they watched The Oprah Winfrey Show every day at 4:00, and Oprah shared that information with her audience.

Scheduling classes for women in our school at 4:00 was difficult since so many of them wanted to relax with Oprah from 4:00 to 5:00.  It was like an intimate coffee club, and Oprah was the head of the group.  Her influence on my female students was enormous.  I must have seen two dozen presentations on Oprah Winfrey over the years, and every time I saw one, the women in the presenting group commented on Oprah's "weight problem," but they didn't talk about it as a problem.

Oprah fluctuates between being overweight and obese because her weight goes up and down like a yoyo.  She shared her trials and tribulations in weight control with her audience/friends on a regular basis, and since her audience was predominantly women, she invited guests to appear on her show that could touch women's hearts.  Women, particularly young women, are conscious of and sensitive to comments about their weight.  Oprah and her guests made them feel good about themselves despite their growing "weight problem." 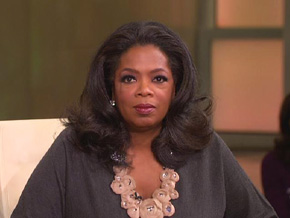 It was obvious that the young women in my classes were concerned about being accepted for who they are -- excess weight and all.  They saw those extra pounds as an important extension of them as human beings, not as a problem to be solved.  That's why I think you can make a compelling argument that The Oprah Winfrey Show was the tipping point for the obesity problem among women, particularly young women -- because Oprah made being fat okay for large numbers of them.  Since women are bellwethers, when being overweight or obese tipped from a contagion to an epidemic in the female population, it became acceptable for men to put on extra pounds, too.  I believe that Oprah made it "Cool to be Fat."

In the 1990s, the surgeon general of the United States, Dr. C. Everett Koop, made obesity a national issue.  When he did, the fireworks began.  Dr. Koop presented mountains of data showing that our obesity problem is huge.  He even proved that what doctors call "normal weight" is too high.  In other words, "normal weight" isn't normal.

When Dr. Koop launched his campaign, 50 percent of U.S. citizens were overweight, and 25 percent of them were obese using "normal weight" tables that we know were wrong.  The medical community responded immediately by arguing that their patients who were on "diets" were struggling unsuccessfully to lose enough weight to get down to "normal weight" and that adjusting the weight tables to reflect more accurate information could send many of them into depression.

When the debate ended, they modified the "normal weight" tables slightly, but to this day they still mask the severity of our nation's weight problem.  The overweight and obese population in our country has enough political muscle, or fat, to prevent health experts from doing what they know is right.

If you watch television, read newspapers, or listen to the radio, you will be inundated with stories, commercials, public service announcements, and talk show discussions about our "obesity problem."  What Dr. Koop couldn't achieve from his government position because of enormous political pressure to maintain the status quo, the powers that be are trying to accomplish by promoting healthy eating habits.  They are attempting to move our society toward another tipping point -- one that reverses the undesirable and unhealthy pattern.  Will they succeed?  Only time will tell, but leveling off is far from a reversal.  Obesity among children is still on the rise, and as they grow older, our overweight and obesity problem could get worse.

A 2010 report on obesity in the United States prepared by the Trust for America's Health (TFAH) revealed results that are virtually identical to the CDC results that were released last week:

According to Dr. Jeffrey Levi, executive director of TFAH, "Obesity is one of the biggest public health challenges the country has ever faced, and troubling disparities exist based on race, ethnicity, region, and income."  He's right, and you don't need to read the report to know that we have a serious problem.  All you have to do is go to the mall or the Golden Corral.  More than a third of Americans can look in the mirror and see the problem.

In 2008, U.S. health care costs associated with obesity were $147 billion, but we face a multitude of other problems that are a direct result of obesity including lower wages, fewer work hours, higher air travel costs, and more gasoline consumption.  Cutting to the chase, overweight and obesity costs threaten to bankrupt this nation if we don't solve the problem.

Neil Snyder is a chaired professor emeritus at the University of Virginia.  His blog, SnyderTalk.com, is posted daily, and he is the author of What Will You Do with the Rest of Your Life?