In what promises to be an enormous document dump, I have received the first in a series of DOJ bundles in response to my FOIA request filed close to a year ago. Specifically, I asked for "records relating to the meeting of the 'Monthly Outreach Meeting' with Muslim and Arab groups at the Civil Rights Division. Specifically, include lists of attendees at each monthly meeting, the agenda of each meeting and any minutes or summary prepared subsequent to each meeting. Please also specifically note the meetings at which the Attorney General of the United States attended."

The principal impact of reading through the material is the sheer bulk of it. Hundreds and hundreds of pages of emails, documenting nearly daily friendly contact, consultation, cooperation and collaboration between the DOJ and Hamas-linked Muslim Brotherhood groups. One thing is clear, the Muslim Brotherhood has fully infiltrated command and control at the Department of Justice civil rights division. 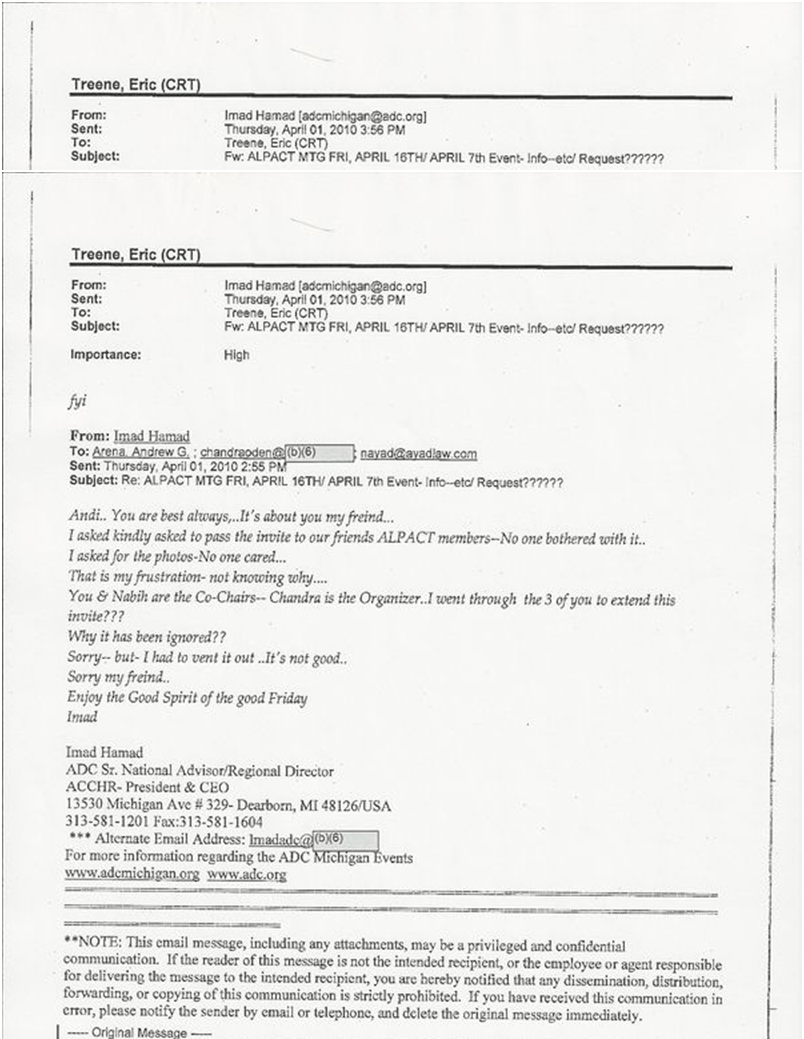 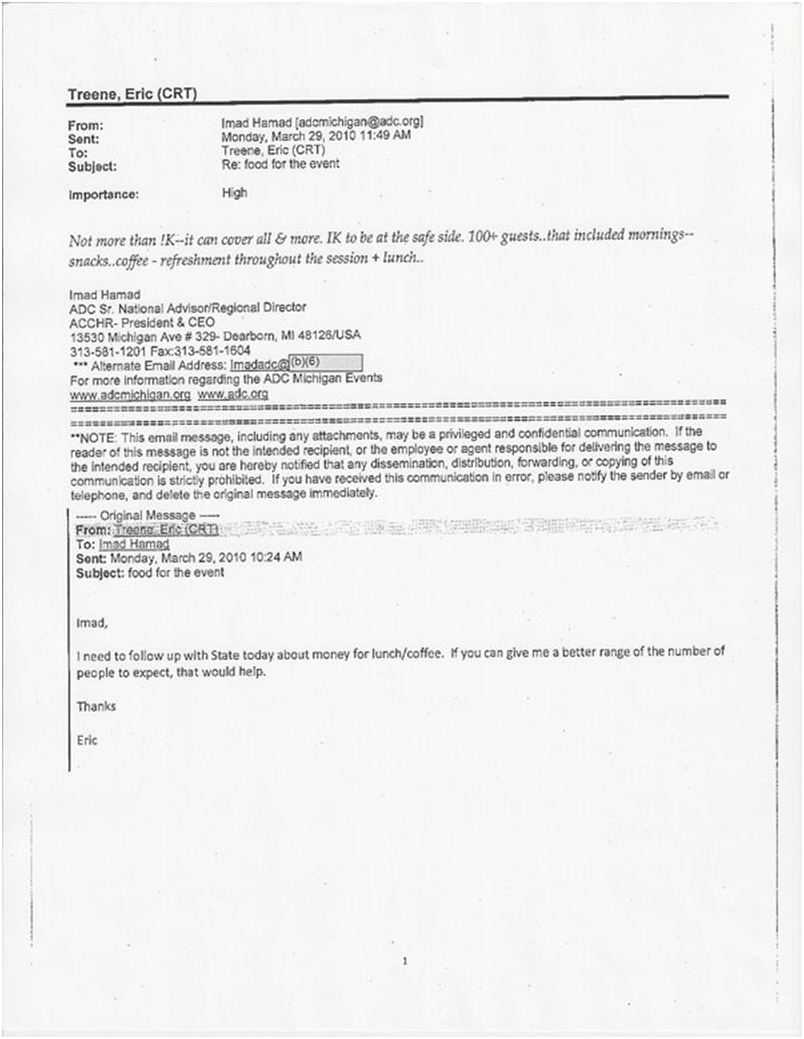 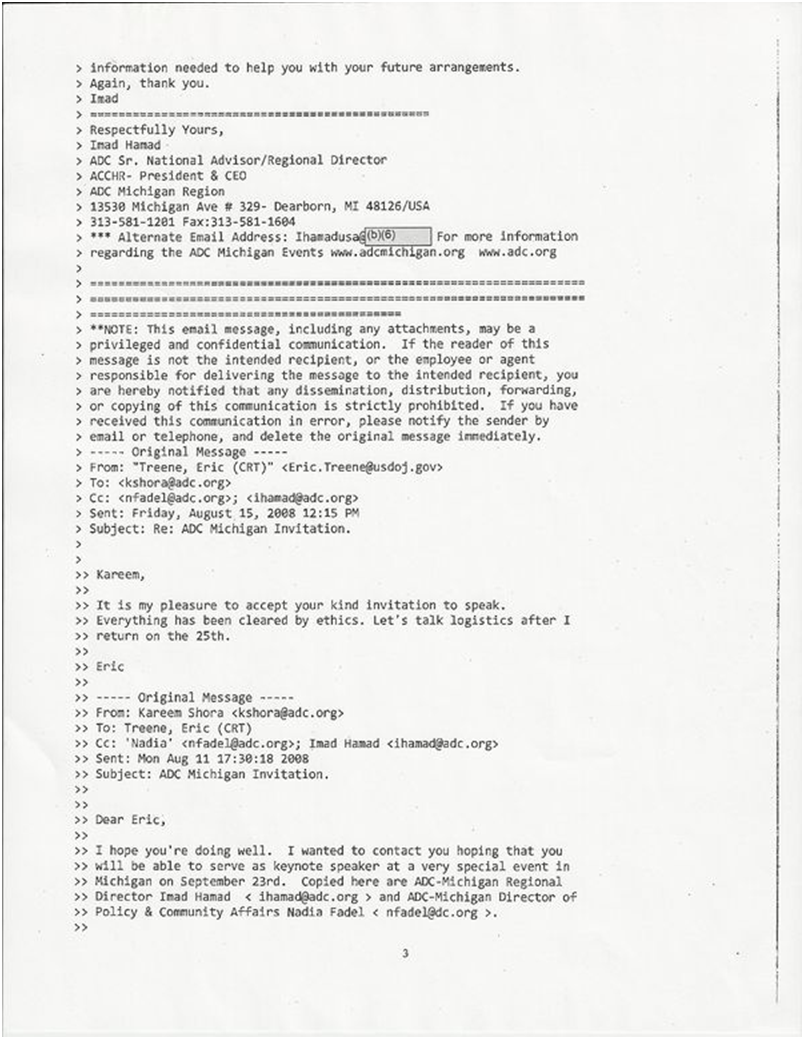 The total located on a preliminary search totals 14,100 documents. The Civil Rights Division's Nelson Hermilla  complained that "it is not clear in what manner the collection of all five-year's records might contribute to the general public understanding." A knowledgeable Justice Department insider told me: "You couldn't generate 14,000 pages of documents if you asked for communications with lenders or apartment or hotels as part of the Housing Section enforcement activities. There are very few things in Civil Rights that would generate 14,000 pages of anything. It has got to be a treasure trove of information."

Indeed. It is also remarkable that the Justice Department would deny that these records would advance "the general public understanding."

Going through the first batch, what struck me almost immediately was the casual familiarity between ISNA, the ADC, and senior officials of the Department of Justice, all the way up to Assistant Attorney General Tom Perez. They discuss lunch, vacations, job changes -- always with the Muslim Brotherhood groups pushing their narrative, even in these casual exchanges.

Even more striking was the servile demeanor of the Civil Rights Division official Eric Treene, Special Counsel for the Department of Justice, Civil Rights Division, and the demanding condescension of Muslim Brotherhood operatives. Muslim and Arab operatives treat Treene and Co. like an errand boy, asking them for email addresses of other contacts and setting them to perform the most menial gofer duties.  The DOJ even takes lunch orders and picks up the tab, and in some cases asks them how much money they need for a little soiree they're holding. It is astonishing.

In a rational society, these Muslim Brotherhood-linked groups would be marginalized. Instead, the DOJ is playing Stepin Fetchit for them. They're using the DOJ as their legal arm.

The depth and the breadth of the penetration is difficult to fathom until you see all of these documents going back and forth, and the players, who include Nihad "I am in support of the Hamas movement" Awad of Hamas-tied CAIR; Suhail Khan, who accepted an award in 2000 from the now-imprisoned al-Qaeda financier Abdurrahman Alamoudi; and James Yee. James Yee a Muslim chaplain at Guantanamo who was charged with sedition, aiding the enemy, spying, espionage, and failure to obey a general order. He was charged along with three others. The charges were later dropped, when Major General Geoffrey Miller cited "national security concerns that would arise from the release of the evidence." The notorious Yee gave an interview on Syrian television in Arabic, in which he repeated Gitmo detainees' lies of Quran abuse on the part of the U.S. Military.

Those three and many others received a September 8, 2011 letter from Perez touting all the DOJ's actions on behalf of Muslims, including a suit against the city of Lilburn, Georgia for resisting the expansion of a mosque and amicus participation calling for dismissal of a suit brought by Murfreesboro, Tennessee patriots against an Islamic supremacist mosque there.

Eric Treene at one point asks Mohamed Elsanousi of Hamas-tied ISNA to circulate among ISNA operatives an invitation to a DOJ seminar on Federal Laws Protecting Religious Freedom.

This is who the DOJ is including in its "outreach." They wouldn't dream of ever including AFDI or other freedom fighters in their "outreach."

The DOJ holds "inter-agency meetings" with Muslim Brotherhood groups on a regular basis. Prior to these meetings, Treene sends around issues submitted by these very groups to be discussed at the meeting -- submitted, I assume, for their approval. For example: for a May 10, 2010 meeting, Treene circulated a memo including issues to be raised:

Got that? In light of a massive bomb attack plot in New York that would have dwarfed 9/11, what is the DOJ doing? Circulating MPAC's recommendations. The response is not how to defeat jihad. Instead, Americans are attacked again with the false narrative of an anti-Muslim backlash.

Among Stepin Fetchit Treene's daily errands, on February, 17, 2011 he sent Elsanousi of Hamas-tied ISNA the phone number of the U.S. Attorney for the Northern District of Florida, Pam Marsh, who, he says, "wants to do some interfaith outreach" in light of Pastor Terry Jones's "Put the Quran on Trial Day." The DOJ always makes sure to include Hamas-tied Muslim Brotherhood groups in its outreach: Treene asked Elsanousi on January 3, 2011 for "some Miami area contacts in the Muslim community to give to the US attorney's office civil rights coordinator." On October 25, 2010, Julia Shearson of Hamas-tied CAIR wrote to Treene: "We really appreciate your outreach to us."

The agenda of the "The Interagency Meeting" held on October 14, 2011 with these subversives is particularly revealing. Issues to be discussed included "NYPD intelligence gathering," "anti-shariah legislation," and the Alex Odeh murder investigation.

Alex Odeh of the American-Arab Anti-Discrimination Committee (ADC) was killed by a pipe bomb in 1985. The perpetrator has never been found. The ADC claims that the Jews were responsible, and that the failure to find a suspect is evidence that the Justice Department discriminates against "Palestinians." They repeatedly pressed the DOJ to reopen the Odeh case, so as to show that Muslims are not the only ones who commit acts of terror. So here we have Islamic supremacist groups using the DoJ to go after Jews. And the servile Eric Treene compliantly put this matter on the agenda of one of his many meetings to hear the demands of Muslim groups. 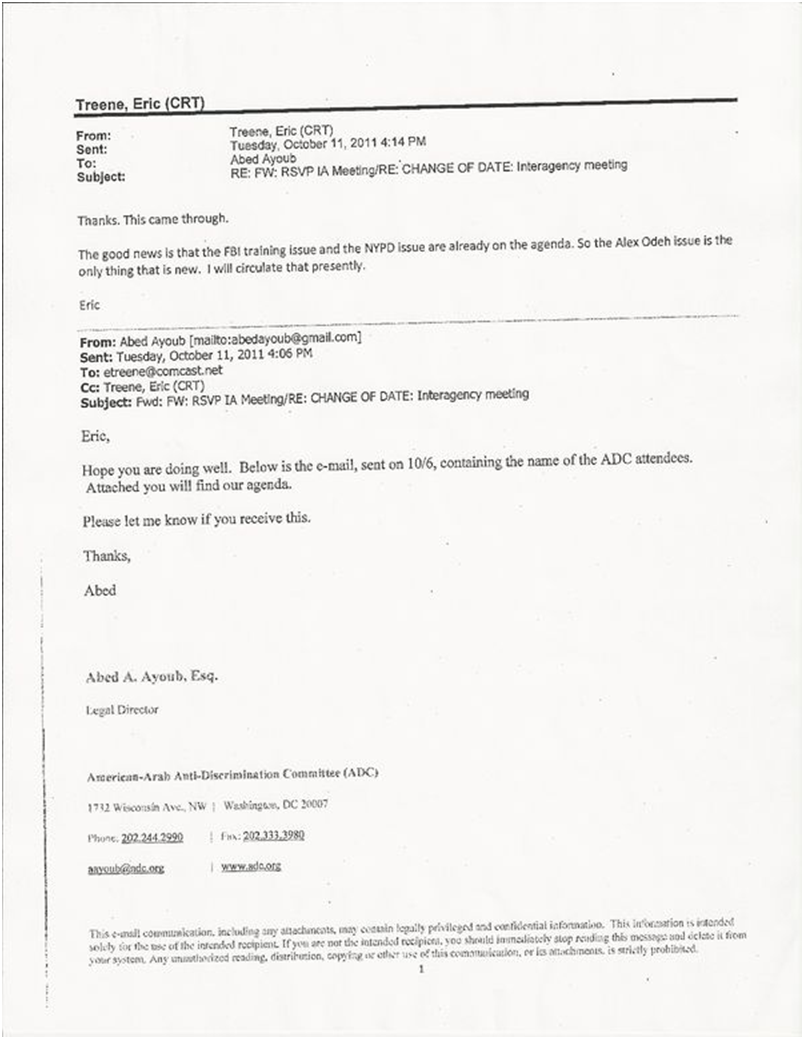 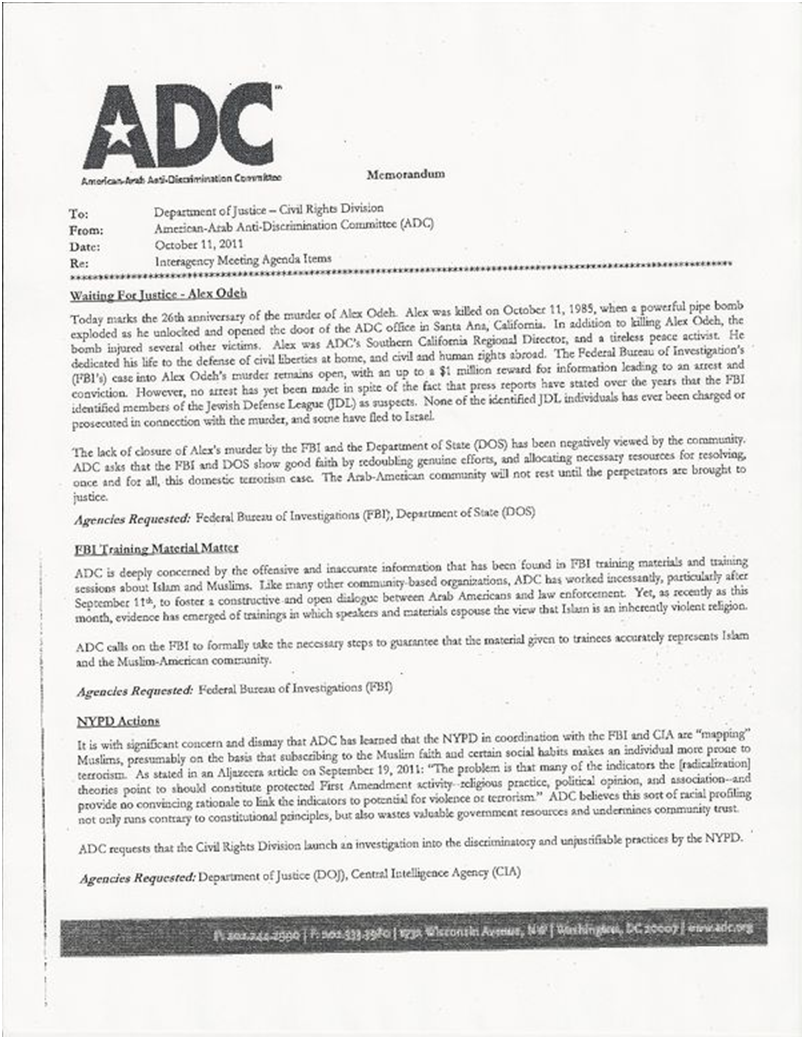 Freedom lovers need to demand that our government cut off all ties with Hamas-linked Muslim Brotherhood groups. We need to demand of our elected officials that this foolish and destructive collaboration cease.

Pamela Geller is the publisher of AtlasShrugs.com and the author of the WND Books title "Stop the Islamization of America: A Practical Guide to the Resistance."