The U.S. military has developed the best system in the world for dealing with combat casualties.  As medical technology has advanced over the last century, new methods of treatment have been developed, and the speed and efficiency of transport from the battlefield to essential medical services has greatly increased chances for combat wounded to survive.  So it is particularly galling that with all these improvements, the U.S. Army has not similarly adjusted its regulations regarding deployment of medical evacuation (medevac) helicopters in combat zones to compensate for the realities of modern warfare.  It is bad enough that the Obama administration has imposed deadly rules of engagement to reflect its leftist worldview.  The U.S. Army has been racking up its own body count due to nothing more than bureaucratic intransigence.

A new article in Soldier of Fortune magazine (yes, that Soldier of Fortune -- still kicking after 35 years), by Dalton Fury, former Delta Force Commander and bestselling author of Kill Bin Laden, has explained the problem.  Army regulations require that medevac helicopters follow the Geneva Convention, which specifies that they must be unarmed and display prominent Red Cross markings.  Furthermore, Army regulation forbids medevac choppers from entering a combat zone without armed helicopter escort.  If armed escort is not immediately available, medevac helicopters remain grounded, regardless of the emergency.  Once they do go in, they become a conspicuous target for enemy forces, most of whom have never read the Geneva Convention and would laugh it out of existence if they had.

A recent tragedy in Afghanistan highlights the high cost of these restrictions.  As reported by veteran combat reporter Michael Yon, Army Specialist Chazray Clark was severely wounded on a night mission after stepping on an IED: 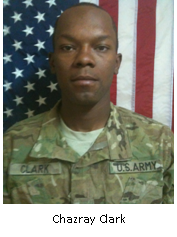 Chazray was facedown. One arm and both his legs were gone, and yet this man had the strength and presence to call out from the dust and darkness. Chazray answered, "I'm okay[.]" ... Although Chazray had answered that he was okay, everyone here knows that when someone calls out 'I'm okay,' the sound of their voice only means they are still alive. Fellow Soldiers located Chazray in the dark, and quickly put on tourniquets and unfolded a stretcher.

The medevac was very late. It took us about 20 minutes to get back to the Landing Zone (LZ). Based on my significant experience down here in southern Afghanistan, I know that the helicopter could and should have already been on orbit waiting for us. Chazray was dying but fully conscious and talking the entire time. We waited, and waited. Finally a radio call came that the medevac was "wheels up" from KAF. It was unbelievable to us that the medevac was just taking off from Kandahar Airfield, twenty-five miles away.

The helicopter could not leave the ground until escorted, and since no Apache helicopter gunships were immediately available, it sat on the tarmac while Chazray bled out.  Even more outrageous, there were Air Force helicopters at that same airbase that could have come immediately.  These choppers are heavily armed and need no escort, or could have served as escort.  But Army regulations forbid their use.

All these protocols must be followed.  According to Army field commanders, they have zero discretion.  They have been complaining about it for years, to no effect.

In the Soldier of Fortune article, Fury (a pseudonym) traces the development of Army protocols regarding medevacs in the field.  The U.S. Army manual on medical evacuation quotes Geneva Convention regulations regarding Medical Aircraft (emphases mine):

A-6. Medical aircraft exclusively employed for the removal of wounded and sick and for the transport of medical personnel and equipment shall not be attacked, but shall be respected by the belligerents, while flying at heights, times, and on routes specifically agreed upon between the belligerents concerned.

A-7. The medical aircraft shall bear, clearly marked, the distinctive emblem together with their national colors on their lower, upper, and lateral surfaces.

A-8. Unless agreed otherwise, flights over enemy or enemy-occupied territory are prohibited.

A-9. Medical aircraft shall obey every summons to land. In the event that a landing is thus imposed, the aircraft with its occupants may continue its flight after examination, if any.

A-10. In the event of involuntary landing in enemy or enemy-occupied territory, the wounded and sick, as well as the crew of the aircraft, shall be prisoners of war; medical personnel will be treated as prescribed in these Conventions.

SELF-DEFENSE AND DEFENSE OF PATIENTS

A-11. When engaging in medical evacuation operations, medical personnel are entitled to defend themselves and their patients. They are only permitted to use individual small arms.

A-12. The mounting or use of offensive weapons on dedicated medical evacuation vehicles and aircraft jeopardizes the protections afforded by the Geneva Conventions. These offensive weapons may include, but are not limited to machine guns, grenade launchers, hand grenades, and light antitank weapons.

A-13.  Medical personnel are only permitted to fire in their personal defense and for the protection of the wounded and sick in their charge against marauders and other persons violating the Law of War. 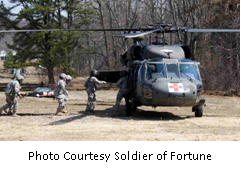 This is simply stunning.  With al-Qaeda and the Taliban, we are fighting an enemy who mass-murders schoolchildren, beheads people with medieval lust, and engages in real torture and every imaginable form of barbarity, all while camouflaged as civilians to capitalize on our restrictive rules of engagement designed to minimize civilian casualties.

Yet sections A-6 through A-10 assume that the enemy will not attack properly marked medical aircraft, dictate that our forces coordinate all aspects of medevac flights with the enemy, avoid enemy airspace, and even obey their orders to land!  Finally, aircraft must be emblazoned with the distinctive "shoot here" Red Cross that turns medevac helicopters into clay pigeons.

Section A-12 makes the heroic assumption that the Geneva Convention affords protections for unarmed medevac helicopters.  The message seems to be "Arm your chopper at your own risk!"  Here we see the consequences of mindless PC philosophies worked out to deadly effect in the real world, where stupidity kills people!

Furthermore, none of this is necessary.  The Geneva Convention applies only to organized militaries of identifiable governments who have signed the Convention or have otherwise formally agreed to follow its tenets.  Guerrilla groups like the Taliban, al-Qaeda, Hezb'allah, and others have no standing.

There is no requirement for a signatory nation to follow the Convention when opposing forces do not respect it.  To do so is suicide, yet to placate the denizens of PC, the Army goes right ahead.  Perhaps the bureaucrats and politicians who design these policies should first be required to personally oversee their employment in the field.  One suspects the regulations would change overnight.  But safely ensconced flying a desk in the Pentagon, these people are much more fearful of a congressional hearing or a derogatory editorial in the Washington Post.

U.S. troops are paying for that cowardice with their lives.

The U.S. Army is the only branch that follows this unnecessary protocol.  Air Force, Navy, and Marine rescue choppers have dispensed with the Red Cross and come armed to the teeth, usually with multiple miniguns.  Enemy forces vanish at their approach rather than risk a murderous fusillade of return fire if they reveal their position by taking a shot.  The result: fewer casualties on both sides -- just what the PC clowns claim to want.

Finally, since the Army requires that unarmed medevac helicopters be escorted by helicopter gunships, the Army is really just wasting assets while putting medevac passengers and aircrews in unnecessary danger.

This one is the best:

A-18. Because even the perception of impropriety can be detrimental to the mission and US interests, HSS commanders [HSS = Health Service Support, ed.] must ensure they do not give the impression of impropriety in the conduct of medical evacuation operations.

This is the catch-all excuse when the others are found wanting.  Even if we know we don't have to follow the Convention in this case -- even if we know it is moronic and potentially fatal to do so -- this regulation argues that we should still risk the lives of combat troops and aircrews so that people too stupid or careless to know the facts do not become alarmed when we create the "perception of impropriety" by properly arming medevac helicopters against almost certain attack!  Such conspicuously self-conscious, gutless attitudes have no place in military policy.  The military exists to protect our country at the least cost in U.S. blood and treasure possible.  Period.

Soldier of Fortune magazine has a long-established record of bringing these kinds of issues to light.  Their storied history in doing so is recorded in a three-part history here, here, and here.  Most who read this series will be surprised to learn the many things this magazine has done behind the scenes to assist our military efforts across the globe.  And like anyone who stands up for America, they have been vilified in the press for doing so.

Thanks to Soldier of Fortune and Michael Yon, the tragic consequences of this policy have seen the light of day.  With enough publicity, perhaps the Army will finally be persuaded to change its irresponsible and stupid policy.  If so, the death of Chazray Clark may not have been entirely in vain.  Please spread this message far and wide, and hold your representative and senators to account for the result.  It goes without saying that this president and his criminal gang of leftist agitators need to be shown the door in November, for if past is precedent, one suspects that the Army may be prevented by this pointedly anti-American, anti-military administration from making necessary changes.