A funny thing happened on my way to shop at Target yesterday: there was no Salvation Army guy with the little red kettle collecting money!  What gives?

At the front door of our local Target store, just as the shopper enters the store, is a sign that pledges "distraction-free shopping" -- and then the shopper gets all the distraction he would ever want.  Seems a bit contradictory, but this has been Target's policy for a few years, and I am only now noticing.  For once, I want more distraction, at least at the front door.  It's Christmastime, you know. 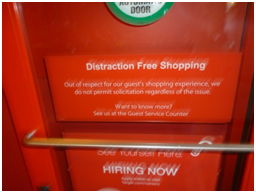 have recently banned or limited the Salvation Army kettles.

The latest controversy has to do with gay and lesbian issues.  The lesbian, gay, bisexual, and transgender (LGBT) community is calling for a boycott of donations to the Salvation Army kettles.  What was once a few voices here and there is now a chorus in the LGBT community to boycott.  Because the Salvation Army is really a hybrid Christian church/community outreach/disaster relief organization, it won't hire people for its staff unless they are practicing Christians, and that excludes sexually active gays and lesbians.  And despite the position on hiring, Salvation Army does not dole out relief on the basis of faith or sexual orientation.

And donating to the kettle does a lot of good.  According to the Salvation Army's website, among other activities, the Army operates senior citizen centers, provides meals for the homeless, operates community food banks, runs youth camps, and provides emergency disaster relief.

But what about the day-to-day stuff they do?  Is there any political indoctrination in, say, a typical soup kitchen run by the Salvation Army?  Maybe a homophobia oath before getting fed?  In hopes of answering this and other questions, I went to the local Napa feeding center to see for myself.  And no, they weren't offering any of the local highly-rated Napa wines, much as I would not have minded that.

This would be my first trip to a free soup kitchen.  What would it be like?  My template was Charles Dickens.  I pictured a bunch of desperately poor and hungry people, all being given the watery oatmeal like what you see in the poverty TV commercials.  Some, like the orphan Oliver, would be asking for more but being told to get lost.  I also envisioned some well-dressed guy with an effeminate voice being told to "scram" and take his lifestyle with him.

At first I thought this might be a rough crowd, so I'd better try to fit in if possible.  I decided to un-tuck part of my shirt, and I spoke with incorrect grammar, just to be safe.

But I was pleasantly surprised by the people and staff there.  No need to fit in.  I tucked my shirt back in.  The lunch crowd formed a long line, but there was no cutting or bullying.  The servers were polite and non-discriminatory, even smiling at me when I said "thanks."  And while the food wasn't really bad, it reminded me of hospital food.

I tried to notice the smell of booze on people's breath, and I didn't smell any.  I asked another diner nearby and she told me that the few times people come in drunk or high, they get kicked out.  "This is a church, after all," she told me.

The only way to describe most of the people eating there was that they had had some rough miles.  Many of them called each other by name and asked how they were doing.  Family was a big topic.  As I conversed with some of them, they laughed at my jokes, so obviously I was among intelligent people.

There were a couple of people nearby who disapproved of the taste of the food, but they were in the distinct minority.  I wondered, "How can you possibly complain about free food?"

As I left, I faced a dilemma: how much tip to leave?  Is it proper etiquette to leave a tip when you just got a meal for free?  This is something I was never taught in prep school.

Then I talked with the woman in charge, and she answered my questions about volunteering there.  She told me that although Salvation Army feeding centers are independent, most are open to volunteers doing any kind of help.  The only thing needed in volunteering was a good attitude and an ability to work without constant supervision.  I will definitely be back to volunteer.

To be fair to Target and the other stores banning or limiting the bell-ringers, most have a policy where the corporation donates to the Salvation Army.  For example, Target's website reports that it supports Salvation Army by granting money and making in-kind donations.

But that isn't the same.  It kind of reminds me of President Bush's statement about how we could help the country after the 9/11 attacks.  He said -- and this is a crude paraphrase -- just "go shopping."  But we wanted to have a hands-on helping experience.  Whether it is buying war bonds or collecting rubber or rationing butter, Americans wanted to personally do something to help the war effort.  I remember once back then, trying to explain to my unpatriotic spouse that instead of my doing the dishes, we needed to ration water to help the war effort.  (It didn't work.)

But those of us who care want to directly help the Salvation Army pay for their soup kitchens, food banks, rehab centers, disaster recovery work, everything.  It is simply no fun to just shop at Target, or other stores, knowing that a part of our money goes to the Salvation Army.  We want to personally hand money -- or even our credit card -- to the red kettle.  As the Apostle Paul wrote, "God loves a cheerful giver," and people like to give to the Salvation Army.  Paul didn't write about cheerfully giving indirectly.

So this Christmas season, we should give generously to the Salvation Army, directly through their kettles.  We should also make an extra effort to shop at the stores that allow these kettles in front.  Those kettles could soon be a thing of the past.  Remember, the Boy Scouts were once non-controversial.