Declaring that the debate over how to restore our economy is the "defining issue of our time," President Barrack Obama invoked former president Theodore Roosevelt's progressive reforms of the early 20th century as a template for economic recovery today. "Roosevelt," the President said, "... knew that the free market has never been a free license to take whatever you want from whoever you can. It only works when there are rules of the road to ensure that competition is fair, open, and honest."

From there, the President made the regent argument that the "rugged individualism" that characterizes laissez-faire capitalism has "never worked," and that we should echo Roosevelt's call for a New Nationalism. "Our country," Roosevelt said, and as Obama quoted, "...means nothing unless it means 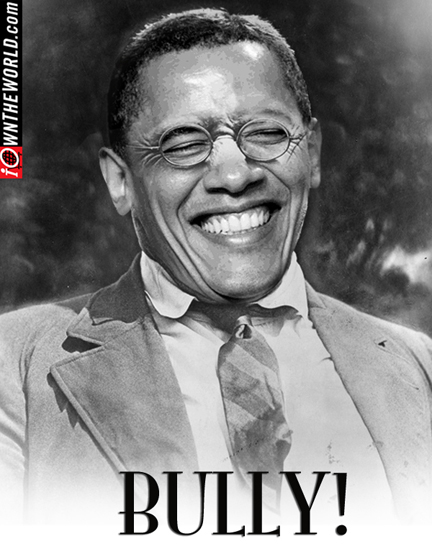 the triumph of a real democracy...of an economic system under which each man shall be guaranteed the opportunity to show the best that there is in him."

This argument -- that free-market capitalism is incongruent with "a real democracy" -- stems from the most profoundly insidious premises.

Thomas Jefferson, in drafting the Declaration of Independence, enshrined a particular political philosophy congruent with man's nature; that individuals were, by right of their nature as rational animals, endowed with inalienable rights to the destiny of their own lives. From that axiom grew corollaries like the right to be free of compulsion (liberty), to engage life as one sees fit (happiness), and to keep that which was rightfully earned (property). Thus, "government was instituted among men" for no other reason than to defend man's natural right to his own life from any corner that may wish to infringe upon it. It was with this philosophical understanding that government was inconsequential to all rights-respecting individuals who kept to themselves or made voluntary agreements with their neighbors. Government's role was negative in nature; to stop injustice, so justice itself could remain.

This philosophical foundation was reassessed however by the Progressive movement beginning in the late nineteenth century. The Progressive "consensus" was born by discontent with the first 'big business', the transcontinental railroad. Soaked in government subsidies by the passage of the Pacific Railways Act of 1862 [1], the railroad industry was encouraged to over-produce railways so much so to the point where supply far exceeded demand. Yet, instead of prices reflecting this new equilibrium, the monopolistic status granted to railroad corporations by the government assistance, allowed them to arbitrarily set prices.

From this experiment of meddling in a free market, grew general discontent with the railroad industry in particular and laissez-faire capitalism in general. It seemed at the time to many that the rich were getting richer at the expense of the poor; that unregulated capitalism had led to monopolistic conglomerates in the industries of rail and oil and now consumers were paying the (higher) price.

A call for reform echoed across the American landscape in favor of regulation at the Federal level, instituting welfare programs for the poor, and price controls in the forms of laws and tariffs. Herbert Croly, a Progressive intellectual and editor of the magazine The New Republic wrote in his seminal treatise The Promise of American Life:

...the traditional American confidence in individual freedom has resulted in a morally and socially undesirable distribution of wealth. [2]

How, one might ask, could a country in the span of a century go from such staunch individualism as exemplified by the writings of Thomas Jefferson, to varying flavors of Progressivism exemplified by author Herbert Croly?

This fundamental change came from the redefining of liberty as a concept. With the backdrop of the late 1800s, capitalism had seemingly left a majority of the people behind. Liberty as defined as the freedom from force seemed to lose favor. After all, went the narrative, it was the hands-off approach which led to monopolies and wealth inequality. Liberty then seemed not so passive; it required adjustment, adaptation, and progression to deal with changing realities of time. "Life is complex;" Woodrow Wilson would put it in 1912.

[T]he individual is caught in a great confused nexus of all sorts of complicated circumstances, and that to let him alone is to leave him helpless as against the obstacles with which he has to contend; and that, therefore, law in our day must come to the assistance of the individual. [3]

Liberty became a state of being, a standard of living. It became not just the ability to be left alone, but the ability to employ one's own energies successfully. Wilson likened liberty to a perfectly operating machine, contending that liberty was achieved only when all parts were "associated most skillfully with the other parts of the great structure." Thomas Jefferson's "chaotic individualism," as Croly put it, was far too focused on the wrong side of liberty's equation. Paradoxically, according to the Progressives, the results of liberty, as opposed to the mechanics and architecture of liberty, defined liberty itself.

From this fundamental assumption (that individuals were entitled to equal results) came a series of policy prescriptions which included the promotion of the poor through welfare programs and the subjugation of the rich through regulation and high taxation; in other words, wealth redistribution. This was completely justified under the holistic reasoning; in order to save the many, a few needed to be sacrificed. To the Progressives, wealth was not tied to productive effort, but was a zero-sum game. The rich could only be so at the expense of the poor, and so these policies were justified in the new definition of liberty.

The year 1913 saw a wave of Progressive reforms on the national level take place; the establishment of the national income tax, direct election of U.S. Senators, and the establishment of the Federal Reserve system just to name a few. During World War I, the Progressives nationalized industries such as railroads and banned alcoholic beverages, two initiatives that would be overturned later by popular discontent -- all in the name of fine-tuning the "great structure."

The Federal Reserve would go on to artificially inflate the money supply which led to speculative bubbles throughout the rest of the century. The direct election of Senators largely removed the states' ability to check the federal government. The national income tax, despite being reduced after the end of World War I, remained higher than before the war and remained the federal government's primary source of income. [4]

Some of the consequences of this new chapter of government activity were obvious, like higher taxation and the meddling of natural economic forces. Some of the lesser known consequences however were the introduction of the apparatus for the state to choose winners and losers. By adopting the premise that the government could morally redistribute wealth, competition emerged to secure government favors, benefits, and privileges. J. Brian Phillips writing for The Freeman magazine put it perfectly.

To illustrate this, consider the influx of lobbying in Washington between 1900 and 1920. During this decade known as the Progressive era, the U.S. saw the most interest group organizations form, including the US Chamber of Commerce, National Association of Manufacturers, and the American Medical Association. [6] Moreover, and in particular, the growth rate of non-profit interest groups was greatest during this period. [7]

Progressives, by expanding the state into the business of handing out taxpayer money, would cement the domination of capital to reign over and iniquitously influence politics (which they would later come to despise) giving legitimacy to bribery, blackmail, and cronyism.

These consequences have come to define the recent political discontent with Wall Street and Washington. Despite diverging policy prescriptions, the Tea Party movement and the Occupy Wall Street movement have a general agreement that over the years, the government has picked winners and losers, whether they be the petroleum or the "green" industry, and that such behavior is no longer desirable. But I digress.

The Progressive era reforms that came about during this period marked a tragic scene for liberty's cause. Now subject to the premise that we were all our brothers' keepers, that the individual lacked the rational faculties to navigate the complexities of life, and that capitalism was a force to be contained through regulation, liberty's torch was drenched in a sea of taxation, wealth redistribution, and regulation. The American family would find its hard-earned wealth taxed away, now less free to invest in their future. The poor were rewarded with federal-assistance programs funded by taxes meant to pay for the legitimate roles of government, like a military and the police. Businessmen were now expected to burn the candle on both ends -- to increase wages and benefits while simultaneously increasing employment, regardless of economic realities. They were now less free to operate their business as they saw fit.

Egalitarianism inherently circumvents liberty. By ignoring the natural heterogeneity of the human race, Progressives sought to impose equality where it naturally could not fit. Humans are unique in talent, skill, and culture. This uniqueness has allowed a division of labor into specialized groups that has brought untold wealth and prosperity to the entire race. It is this uniqueness, along with our rational faculties, that makes our race what it is. Circumventing that uniqueness has a substantial cost: the liberty of others.

Jeffersonian liberty, the bedrock of America's founding, rests on the idea that individuals are means to their own ends, never the ends of others; that individuals should be free to engage in voluntary acts of mutual agreement with each other; and that they deserve that which they produce. Progressivism represents the antithesis of these simple concepts. Its dawning on the American polity during the turn of the nineteenth century brought about structural changes that gave rise to iniquitous lobbying that dominates politics even to this day; to the administrative state that continues to circumvent natural economic forces; and to a fundamentally new and perverted definition of liberty and America's founding philosophy. President Obama has endorsed this Progressivism, and should be held accountable for those ideas.

J.K. Gregg is a post-graduate student at American Public University and a blogger at Persona Non Grata.

illustration by illustr8r of iOwnTheWorld.com