Warning: mysqli_free_result() expects parameter 1 to be mysqli_result, bool given in /var/www/html/americanthinker/admin/common/functions/func.general.php on line 126
 The Inconvenient Truth about Species Extinction - American Thinker
|

The Inconvenient Truth about Species Extinction

"Overall, species loss is now occurring at a rate 1,000 times greater than the natural background rate," says Al Gore in the Academy Award-winning documentary An Inconvenient Truth.  However, new data published in a peer-reviewed journal illustrate how this claim, shown in the video clip below, is radically misleading.

Gore fails to mention that this "natural background rate" he speaks of is a fossil-based estimate burdened with so many assumptions that a 2005 Cambridge University Press book on biodiversity (page 139) states that no "serious" attempt has been made to "judge the reliability" of this figure.  Indeed, the "uncertainties at each stage of the calculation" would make the effort worthless.  The book goes on to explain, "Probably no one will be surprised if this estimate is off by a factor of 10 or even 100."

To illustrate the vacuousness of comparing modern extinction rates to the so-called background extinction rate, we need only to apply Gore's "1,000 times" claim to some hard data, which we can find in a recently published paper in the journal Diversity and Distributions.  The authors of this paper analyzed the "actual historical record of extinctions" and found that a total of 190 birds and land-dwelling mammals have gone extinct since the year 1500.

Consequently, if humans were causing these species to disappear at 1,000 times the natural rate, in the absence of man, one-fifth (190/1,000) of a single bird or mammal would have gone extinct in the past five hundred years.  These figures become even more implausible when we consider the fact that only nine of these 190 extinct species lived on continents.  The rest lived on islands, where populations are small and geographically restricted, causing them to be poorly represented in the fossil record and hence inapplicable to the background extinction rate.

Thus, here is the more significant fact: if continental birds and mammals were actually going extinct at 1,000 times the natural rate, in the absence of man's influence, only one continental bird or mammal would go extinct every 56,000 years (1,000×500/9).  This absurd result shows just how far-fetched Gore's assertion is.  Furthermore, as the paper's authors point out, mammals "are widely assumed to be at greater risk [of extinction] than other species."

Note that Gore is not the only environmentalist to paint such a dire and distorted picture of modern man causing wholesale extinctions.  Michael J. Novacek of the American Museum of Natural History wrote in a 2007 book (page 46) that "species are going extinct at thousands of times the background extinction rate" and that we are "thus likely to lose 30 to 50 percent of all living species within this century."  Contrast this wild claim with the data in the above-cited paper, which shows:

The three extinct mammals represent approximately 0.08% of the continental species pool. Even if we assume that all three went extinct in the past 100 years (vs. 500 year), it would take, at this rate, 1235 years for 1% of continental mammals to go extinct. Similarly for birds, the six species represent 0.062% of the 9672 species pool and it would take 1613 years to lose 1% of extant species at current rates even if the recorded extinctions all took place over the last 100 years.

An interesting aside arose during a presentation I gave this week before the Manhattan Libertarian Party.  An astute audience member noticed that one of the creatures in Gore's graphic of extinct species is a coelacanth, which is a fish that isn't actually extinct.  Coelacanths were alleged to have disappeared 65-70 million years ago, but in 1938, a fisherman caught one off the coast of South Africa.  Since then, more than 170 living coelacanths have been pulled from the waters.  See the fish in Gore's graphic below and compare it with this recently caught specimen.  The resemblance is striking. 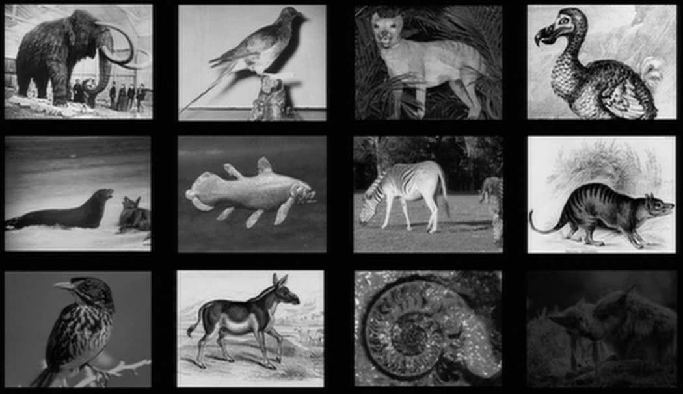 By my count, there are more than 25 inaccurate or misleading claims in An Inconvenient Truth, yet the Associated Press reports that 19 of our "nation's top climate scientists" gave it "five stars for accuracy."  Moreover, the film is being shown in schools throughout the world, and five nations have made it an official part of their educational curricula.  Thus, if you know an audience that wants to understand the inconvenient facts about An Inconvenient Truth, I am currently available for presentations.

James D. Agresti is the president of Just Facts, a nonprofit institute that has published extensive research about the issue of global warming.