The ideas that federal spending exploded under George W. Bush, that "Bush's wars" account for our spending explosion, that Reaganism died with Reagan, and that we are on a spending binge that started decades ago are all nonsense. 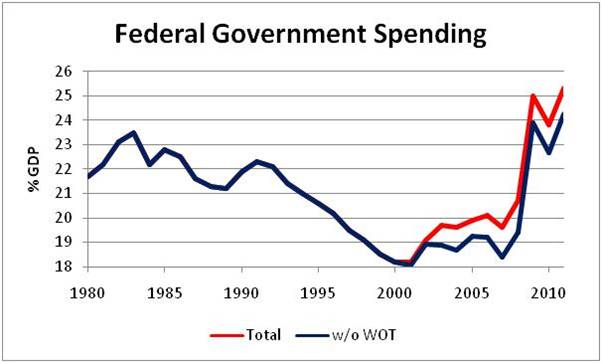 There is something else special about 2007.  That was the last fiscal year in which the federal budget was written by a Republican=controlled Congress.  As you look at the chart above, recall that the U.S. House of Representatives was Republican-controlled corresponding to the budgets of 1996 through 2007 -- the years of the lowest federal spending since Lyndon Baines Johnson was president.

The trend in government spending prior to 1983 was upward.  In fact, it was growing 2% of GDP every decade.  (I wrote of this previously here.)  That upward trend was reversed in 1983, the year Ronald Reagan's tax cuts went into full effect.  Reagan's downward trend in spending did not stop with Reagan; it continued through 2001.  The 17-year result was to cut federal spending from over 23% of GDP to almost 18%.  (Imagine a 230-pound man losing 50 pounds.)

If by "Reaganism" you mean a struggle to keep federal spending below 20% of GDP, it was alive and kicking through 2007. 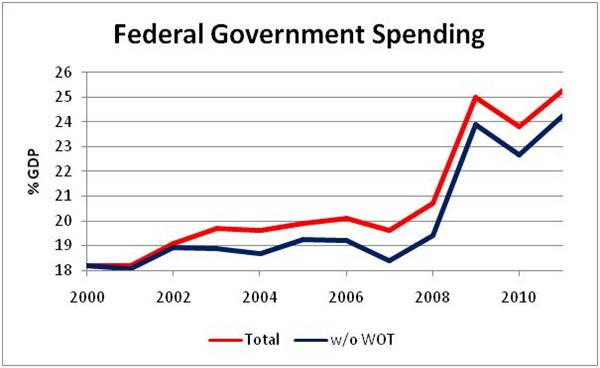 The "bad" things started happening almost the minute voters turned over both the House and the Senate to Democrats.  The FY 2008 budget was written by a Democrat Congress and signed by a weakened, lame-duck President Bush.  In 2009, Barack Obama was inaugurated.  Within weeks of his inauguration, he and his fellow Democrats increased the baseline FY 2009 budget and passed the $825-billion Stimulus.  Look at what happened to spending just from 2007 to 2009.

And the spending never stops under Democrats.  The step up in spending was both immediate and permanent.  The CBO estimates that spending under President Obama's proposals will remain above 24% of GDP through 2019 and 2020.  That is above even the post-World-War peak of 1983!  There is nothing "temporary and targeted" about Obama's spending.  Democrats are doing everything in their power to make Obama's "stimulus" level of spending the new normal.

Do not buy the lie that federal spending is some kind of inanimate object that must inevitably grow.  Federal spending is not a result of the laws of physics, but of laws written by men who are voted into office by you and me.  Spending was under control as recently as 2007.  It all went south only when today's Democrats took control of budgeting.

(A note on data sources used in the graphs.  Total spending numbers came from the White House Office of Management and Budget (OMB), specifically Table 1.3.  The most recent OMB data has estimates for FY 2011; all previous years are actual.  War-on-Terror (WOT) spending numbers came from the Congressional Budget Office (CBO).  See Table A-1 from CBO's congressional testimony of October 26, 2011.  Calculations to convert CBO's WOT current-year spending numbers to percentages of GDP were done by the author.  Also, each 1% of GDP is about $150 billion in today's dollars, in round numbers.)

Randall Hoven can be followed on Twitter.  His bio and previous writings can be found at randallhoven.com.