Careful, OWS Envy-Mongers! The One Percent Have Got Your Number

With the OWS Envy-Monger crowds growing more rowdy and violent by the day, the nation is stunned by the depravity, laziness and childish lack of self-control ubiquitously on display.  But the One percenters in the big, high office buildings are on to this crowd in a way that ought to make the uncouth rabble-rousers down in the park very uneasy about what they're wishing and hoping their Democrat enablers can make come true.

Yesterday, a close friend -- an independent businessman himself for decades -- sent me via email the photo of a flyer, which was purportedly dropped from an office building in Chicago by the Board of Trade down upon the crowd of protesters.  There is no author attribution, so for now, this re-publication remains anonymous.  However, I would gladly print the name of this author -- if he or she should come forward -- so that the rest of us adults in the country could give that great American a round of vigorous applause.

For your ease, dear readers, I have gladly transcribed the anonymous flyer and posted the downloaded photo below -- just as I received it from my politically-saavy businessman friend.   I was unable to authenticate this.  It might have been written by someone sitting at home just using a liberal poetic license with the background story of a genuine Wall Streeter angry as hell.  Well, I say no matter what, let the hunt for this author begin!

Here's one red-blooded American's answer to the OWS Booby-Brats, stuck in their indolent haze of adulthood-postponed:

We are Wall Street.  It's our job to make money.  Whether it's a commodity, stock, bond, or some hypothetical piece of fake paper, it doesn't matter.  We would trade baseball cards if it were profitable.

I didn't hear America complaining when the market was roaring to 14,000 and everyone's 401k doubled every 3 years.  Just like gambling, its (sic) not a problem until you lose.  I've never heard of anyone going to Gamblers Anonymous because they won too much in Vegas.

Well, now the market crapped out, & even though it has come back somewhat, the government and the average Joes are still looking for a scapegoat.  God knows there has to be one for everything.  Well, here we are.

Go ahead and continue to take us down, but you're only going to hurt yourselves.  What's going to happen when we can't find jobs on the Street anymore?  Guess what:  We're going to take yours.

We get up at 5am & work till 10pm or later.  We're used to not getting up to pee when we have a position.  We don't take an hour or more for a lunch break.  We don't demand a union.  We don't retire at 50 with a pension.  We eat what we kill, and when the only thing left to eat is on your dinner plates, we'll eat that.

For years teachers and other unionized labor have had us fooled.  We were too busy working to notice.  Do you really think that we are incapable of teaching 3rd  graders and doing ladscapint?  We're going to take your cushy jobs with tenure and 4 months off a year and whine just like you that we are so-o-o-o underpaid for building the youth of America.  Say goodbye to your overtime and double time and a half.  I'll be hitting grounders to the high school baseball team for $5k extra a summer, thank you very much.

So now that we're going to be making $85k a year without upside, Joe Mainstreet is going to have his revenge, right?  Wrong!  Guess what:  we're going to stop buying the new 80k car, we aren't going to leave the 35 percent tip at our business dinners anymore.   No more free rides on our backs.  We're going to landscape our own back yards, wash our cars with a garden hose in our driveways.  Our money was your money.  You spent it.  When our money dries up, so does yours.

The difference is, you lived off of it, we rejoiced in it.  The Obama administration and the Democratic National Committee might get their way and knock us off the top of the pyramid, but it's really going to hurt like hell for them when our fat a**es land directly on the middle class of America and knock them to the bottom.

We aren't dinosaurs.  We are smarter and more vicious than that, and we are going to survive.  The question is, now that Obama & his administration are making Joe Mainstreet our food supply...will he?  And will they? 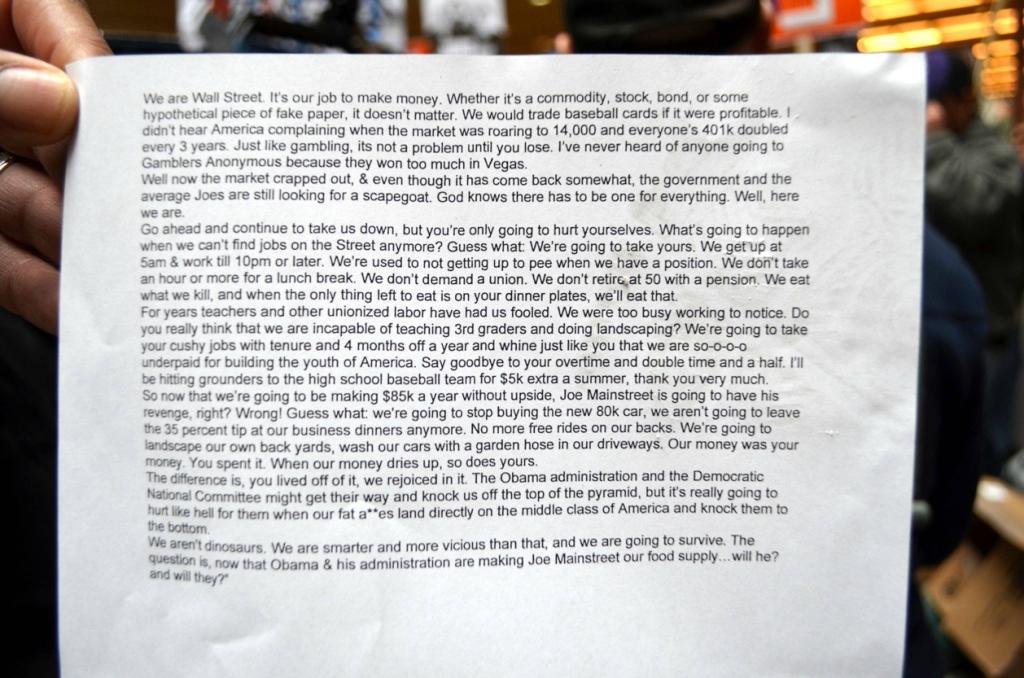 Now, I think you'll all agree, dear readers, that whoever wrote that piece of real-world prose to the Obamaville squatters  is a great American.  His  pure disgust for the indolent mob down in the street ought to hit those whiny puppetry and women's studies graduates right upside their self-inflated, smirking egos like a bucket of ice-cold water.

But the deeper grain of wisdom here is that envy is always - every single time - the biggest, fattest lie anyone ever tells himself.  No matter how much one thinks he knows about another person's life, it is always at the very best, nothing more than a pitiful particle of truth.  All an envier can see of another's life is the obvious, the tiny particle that happens to catch his materially lusty green eye.

The OWS kids see the fancy, 80k car and they want one too.  What they don't see - don't want to see - is those 5am to 10pm workdays without a union-mandated wee-wee break every time a Wall Streeter's bladder is full.  Half those guys probably use self-installed catheters just so they can stay on the job all day.  And they know they've got jobs worth "rejoicing," so they aren't complaining or envying the union perks.

The OWS kids see the high life, the luxuriant business dinners and the corporate jets and they want that too.  What they don't see - don't want to see - is that the people living those lives made the choices they had to make to get them.  The Wall Streeters went to college too.  But they didn't spend their college days getting stoned and studying ways to bring this country down to the level of misery for all.  They studied ways to build the wealth of the country and get better 401ks and retirement bundles for those who would invest in them and American business.

Envy is just a self-destructive indulgence, which is why God said not to do it.

I like the way this anonymous Wall Streeter said it too.

And I would just love to buy that guy or gal a drink.  Here!  Here!  Long live the American capitalist spirit!  It works for them that has it and it works well for the rest of us too.

Here's a gracious bonnet-tip to my longtime friend, Zollie Graham, for sending me the anonymous Wall Street flyer.