Warning: mysqli_free_result() expects parameter 1 to be mysqli_result, bool given in /var/www/html/americanthinker/admin/common/functions/func.general.php on line 126
 The Bizarre World of Radical Climate Science - American Thinker
|

Imagine that you are a climate scientist and the Earth is threatened with a climate disaster.  You need to warn the people of Earth and lobby Earth's governments.  If you are tired of poring over boring computer printouts, you may be only too ready to accept this mission of transcendent importance.

On the other hand, maybe you have lost touch with reality.  Maybe you have become a true believer fighting a dubious battle.  Maybe you are Dr. James Hansen, high civil servant, recipient of cash awards from left-wing foundations, and director of the NASA Goddard Institute for Space Studies.  Hansen was arrested in front of the White House, dressed up to look like J. Robert Oppenheimer, the 1950s scientific martyr.  Hansen wants CEOs of energy companies to be prosecuted for "crimes against humanity." 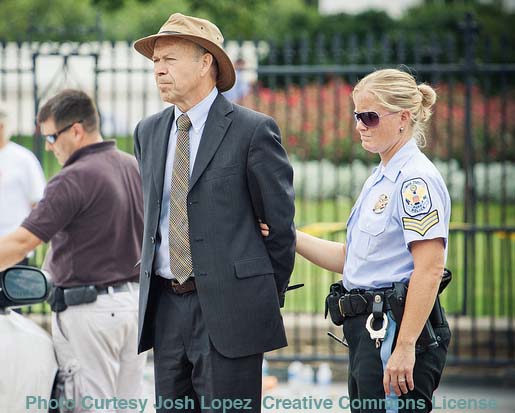 When scientists are fanatical believers in a cause, the authority and credibility that attach to science are turned into political capital to be spent in pursuit of that cause.

To capture the public imagination, we have to offer up some scary scenarios, make simplified dramatic statements and little mention of any doubts one might have.  Each of us has to decide the right balance between being effective, and being honest.

Climate science deals with the energy balance of the Earth and the behavior of the atmosphere.  This is a very complicated system involving convection, evaporation, precipitation, clouds, ocean heat storage, reflection, and emission of radiation, and more.  Although scientific understanding of the system has advanced, especially with the advent of computers and satellites, the system is still quite mysterious in important respects.  It's not at all clear that climate science will ever advance to a point where long-range predictions can be trusted, or, as they say, demonstrate skill.

Burning fossil fuels adds CO2 to the atmosphere faster than natural processes can remove it.  As a result, CO2 has been slowly increasing.  Increasing the proportion of CO2 in the atmosphere will probably exert a warming influence because CO2 has an inhibiting effect on the outgoing infrared (heat) radiation that cools the Earth.  Nearly everyone, skeptic or believer, agrees with these basic facts.  Another basic fact that the purveyors of global warming like to keep quiet about is that more CO2 in the atmosphere makes plants grow much better with less water.  That's because plants in general struggle to extract the scant CO2 in the air.

What is controversial is how much warming can be expected and whether the warming will create practical problems.  The evidence supporting substantial warming (i.e., 3 degrees C) is output from bad computer models.  It's said that dogs come to resemble their masters.  Computer models tend to reflect the aspirations of their creators.

The global warming promoters try to hang all kinds of supplementary disasters on their proposed 3-degree warming over a century.  This is even more dubious than the warming itself.  Some of their claims are absurd, such as the suggestion that the oceans are going to rise substantially, a claim for which there is zero credible evidence.  The data has been running against the theories of global warming.  The atmosphere has failed to warm since 1998, and, more importantly, the upper ocean has failed to warm since 2003.

The idea that we are on the verge of a climate disaster caused by modern civilization is a romantic idea that appeals to people who have lost traditional religion.  It's another iteration of the environmentalist dogma that civilization is ruining the earth.  It's a Garden of Eden story.   Anyone can see that the landscape of areas where industry and technology dominate nature, like Germany or New Jersey, is in far better condition than the landscape is in most third-world countries -- countries that lack evil industry and that practice the precious local small-scale agriculture so loved by the ideologues who want remake the economy to prevent global warming.  The idea that the Earth would be a paradise without civilization is contradicted by the wild climate swings that we know have taken place in recent geological time.  Ice sheets a mile thick retreated from much of North America 10,000 years ago.

The reports of the International Panel on Climate Change (the IPCC) are often taken as the authoritative last word on climate change.  These reports are are disorganized and unfocused.  As a result, most people go no further than the introductory Summary for Policy Makers.  If you dig deep into the reports, solid scientific support for the claims of impending catastrophe is not there.  Computer models are the shaky foundation of global warming.  Models from different modeling groups disagree with each other by wide margins.  As the IPCC admits, the models have serious deficiencies.  The IPCC uses misleading graphical illustrations to make it appear that the models can accurately mimic the Earth's climate.

The CO2 reduction proposals of the global warming gang are relentlessly ideological and impractical.  CO2-free nuclear power supplies 80% of France's electricity and 20% of the electricity in the U.S.  Nuclear fuel is very cheap, and vast supplies are available.  The real problem with nuclear is that environmentalist groups have run a hysterical anti-nuclear campaign for the last 50 years.  A reversal now would be a severe blow to their credibility.  So, instead of nuclear, the global warming gang proposes that we use solar power and wind power, technologies that can cost 10 times more per kilowatt-hour.  They don't seem to understand that solar doesn't work when a cloud blocks the sun or at night, and wind doesn't work when the wind isn't blowing.  As a consequence, solar and wind need to be backed up by fossil fuel or hydro plants with spinning generators ready to quickly assume the load of the grid.  People who are ignorant concerning engineering or science may accept the notion that wind and solar are realistic sources of electricity.  It is more difficult to explain why the government is dumping billions of dollars into these technologies, both in the form of cash and in the form of mandates that shift the cost to electricity users.

Many scientists may have a predilection for green fashion -- for example, backyard compost heaps, organic food, bicycles, solar panels, or giant wind turbines.  Nobody cares.  But it is wrong to misuse the authority and credibility of science to scare the rest of us into embracing the green lifestyle.

Norman Rogers is a physicist and a Senior Policy Advisor at the Heartland Institute.  He maintains a website: www.climateviews.com.