Shedding Some Light on Solar Power

The government tells us that we need to subsidize renewable energy providers with taxpayer money.  Global warming advocates tell us to turn to eco-friendly renewable energy sources like solar power.  They insist that viable alternatives to fossil fuels (like solar) are being ignored because the energy industry is resisting conversion to clean power to protect profits -- at the expense of the planet.  But before we padlock our coal- and natural gas-fueled power plants, let's take a look at the facts and figures regarding solar power.

First, let's take a look at the sources of our electricity.  Solar power currently provides less than 0.07% of the United State's electricity.  So if we increased our solar power capacity by a hundred times,  it would still provide us with only 7% of our energy needs.  Study the data in the graph and chart below form the U.S. Energy Information Administration. Solar power is included in "other renewables" -- it is so small that it does not rate a call-out. 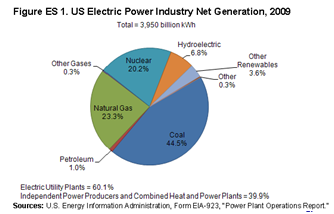 There are two methods to harness the power of sunlight.  One method works by focusing the rays of the sun to the point where enough heat is generated to boil water (solar thermal power).  The resulting steam is used to power a turbine, which turns an electric generator and thereby produces electricity.  The second type of solar power (photovoltaic) converts the energy of the sun directly into electricity.  This second method is the focus of this article.

Photovoltaic solar cells are made of material very similar to the material used to make computer chips.  When exposed to sunlight, the molecules in the solar cell interact with energy from the sun to produce a flow of electrical current.

Solar cells are rated at optimal conditions, which for a solar cell are a cloudless, cool day at noon at a place on the planet where the sun is directly overhead.  If the sun is directly above the cell, the maximum amount of energy is produced.  As the angle the cell makes with the sun deviates from straight-down, the cell's power output drops off.  Cloudy and stormy days and places where the sun is low in the sky produce only a fraction of the rated power.

Prime time for solar power is from a few hours before noon to a few hours after.  So even in the best of circumstances, the cell's output will be low in the mornings and evenings.

Solar cell power output will also vary with the time of year (unless you're at the equator); it is proportional to the hours of daylight and to the angle of the sun.  In northern latitudes, the angle the sunlight makes with the earth varies throughout the year.  Those who live in the north know that the sun is pretty low in the sky in December, and the hours of sunlight are few.  The geographic location is very important to the output of a cell.  The areas near the equator get sunlight at a much more direct angle more of the time than more northern areas such as Minnesota, so the equatorial areas can generate more power.  Also some areas of the world have a lot more cloudy days than others.  The map below shows that most of the photovoltaic power in our country is in the southwest. 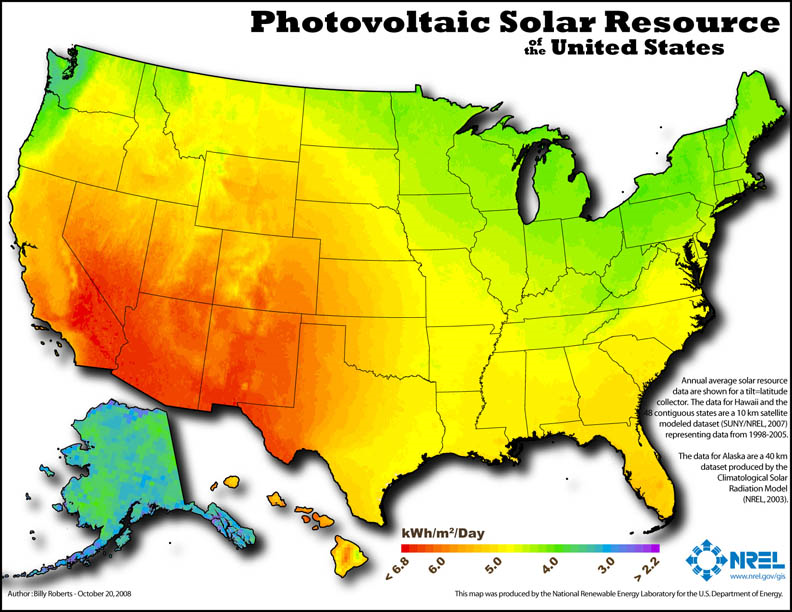 We must also consider the fact that there is no practical way to store this intermittent energy, so we still need traditional power plants to keep our lights on when it's dark or cloudy, or during a storm.  Batteries would be prohibitively large and expensive, and pumped-storage solutions (that pump water into an above-ground lake, and then release it into turbines later) require an elevated man-made lake for each solar plant.

Compare solar power to nuclear power: a typical nuclear power plant is capable of producing about a billion watts (one gigawatt) of electrical power.  To replace this plant with typical commercially available solar panels, which are about 3 feet by 4.5 feet in size and are rated at 150 watts (less in overcast conditions), would require almost 7 million solar panels.  If you were to stand these solar cells next to each other in a line, that line would be 3,295 miles long.  That's enough to go from New York to Los Angeles, and one third of the way back again.  To replace all of the coal, natural gas, and nuclear plants in America with these solar cells would require enough cells to wrap around the earth 120 times.

Solar power does work, though, in its own way, and it's clean and renewable.  It should certainly be a part of our energy plan, but, like wind power, it has its limitations.  Solar power will not be replacing coal, nuclear, and natural gas any time soon.  For the time being, it is destined to remain a small contributor to our energy needs, relegated to easing peak power demand on sunny days in southern climates.

So the next time a pundit throws the solar power argument into the debate on where we should spend money to meet our energy needs, be forearmed with the fact that for the near future, solar can replace only a tiny fraction of the power we get from coal, natural gas, and nuclear power plants.

Chris W. Bell is a freelance writer; he can be reached at chriswb2008@yahoo.com..