Warning: mysqli_free_result() expects parameter 1 to be mysqli_result, bool given in /var/www/html/americanthinker/admin/common/functions/func.general.php on line 126
 Revelations of Time - American Thinker
|

David Horowitz's book A Point in Time is at root an exposé on the nature of Time, that double-edged sword which, by obliterating all in its path, highlights the precious from the superfluous in our lives.

In structure, the book consists of Horowitz's reflections -- from his childhood and father to his deceased daughter and own mortality -- not unlike the approach of Roman emperor Marcus Aurelius, whom the author quotes at length and has apparently learned much from (and a better instructor can scarcely be found).

But this is not an abstract or theoretical book; Horowitz often begins with the mundane and 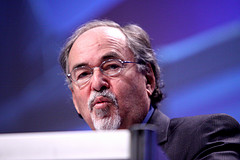 concludes with the profound.  So chapters starting with anecdotes concerning his pets progressively develop into philosophical reflections.  Nor does Horowitz merely quote the great men; he participates in and synthesizes their thoughts, showing their applicability to modern times.

For instance, the stoic emperor asserts that things outside us "do not touch the soul, for they are external and immovable; our perturbations come only from our opinion of them, which is within" -- words to be echoed well over a millennium later by Shakespeare's Hamlet: "Nothing good or bad but thinking makes it so."  Horowitz simplifies: "You cannot alter the world, so do not make yourself miserable trying."

Considering that the author has spent a great deal of his career as an activist, his musings -- all of which lead to the inevitable conclusion that our lives are but a tiny speck in the spectrum of time, soon to be forgotten -- make his reflections especially poignant; for here we have a man whose profession wholly revolves around "making changes" coming to the realization that "[t]his is nature's way, to come and go.  Let it go."  He even confesses to wondering whether, "knowing what I do now [i.e., the temporalness of life,] I would have been able to go forward at all."

But Horowitz is not resigned to passivity or fatalism.  Rather, an internal debate emerges as he tries to reconcile our finite lives in the context of an infinite timeline.  The result is that, time and again, whether through the stoic emperor or the onetime revolutionary Dostoevsky, the inevitable topic of religion and God arises.

And there is no shame in this; as Horowitz asserts, everyone, even the most atheist, subscribes to a system of faith: "secular redeemers must put their trust in human beings.  But how can human beings create themselves anew?  A glance at the human record reveals this to be a much greater leap of faith than relying on a hidden God."  Even the atheist communists were motivated by "a religion[, if] only a different one"; and "the radical idea is today the faith of millions of atheists but it makes no sense."

Can these human-centric religions that promise to bring utopia to earth ever be the answer -- the latest dogma insisting that "we are constructed by our environment" and so "environment is to blame"?  No, "the earthly paradise that ordinary mortals create is not the kingdom of freedom but the totalitarian state."

Indeed, without something "higher" to believe in, something distinctly metaphysical, all systems of belief gravitate towards nihilism, that ill-begotten child of modern philosophy.  Yet, as Horowitz demonstrates, nihilism is not simply a belief in nothing, but a belief in anything but God -- a belief in man as god.  And if this demigod was the überman of years gone by, today he is the sacrosanct victim of society -- in either case, the world must cater to his will or whim.  "Nihilism in the name of something noble."

In the end, Horowitz is not saying he has the answers; rather, his is an honest reflection on life -- without any rationalizations, feigned stoicism, or forced happy endings:

Despite all that I think I know, I still return to the security of my stories, and am content to live in their worlds.  And what is the alternative?  Without our stories our lives would be chaos and our existence unbearable.  Therefore, I keep moving forward, as I always have, though my steps have slowed and my passions have dimmed.  My time is spent reflecting on these facts, and carrying on the work that has taken me this far, looking out for family, friends, and animals as I go.

The message is that time is short -- "something that is surprisingly easy to forget."  Let us therefore put aside vain strivings and make the most of life; let us not waste it chasing chimeras born of a mind that, if fashioned after the divine, is surrounded by flesh and circumstances that exist in but a point in time.