In a Havana cancer ward, as Hugo Chávez contemplates his final days, the truth about his medical condition -- mental and physical -- is coming out.

His face grotesquely bloated, Hugo Chávez has been fighting the biggest battle of his life.  But the prognosis for Venezuela's increasingly reclusive president has been a highly guarded state secret.  Besides distorting his features, the chemotherapy he's receiving has rendered him bald.

Several unconfirmed reports -- all from anonymous sources -- have claimed in recent months that Chávez's cancer is very bad.  Yet during his increasingly irregular and brief public appearances, the leftist 57-year-old leader has remained upbeat -- defying the worst-case scenarios put forth about his health.

Now, Chávez's former Venezuelan physician has dropped a bombshell: Chávez's cancer is terminal, and he has "no more than two years left." 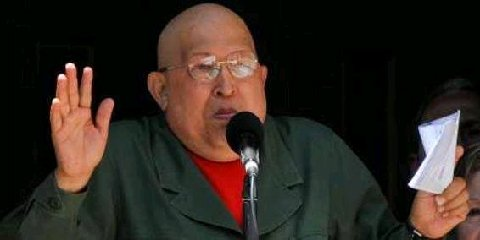 "President Chávez has a tumor in the pelvis called sarcoma," said Dr. Salvador Navarrete, during a lengthy interview published Sunday in Mexican newspaper Milenio Semanal.  He added: "The information I have from the family is that he has a sarcoma, an aggressive tumor with a poor prognosis and I'm pretty sure that's the reality."

Navarrete's revelations offer the most intriguing information yet about Chávez's health -- and perhaps the most credible.  So why is the prominent Venezuelan surgeon breaking a hallowed oath of doctor-patient confidentiality?  It's a question many Venezuelans are asking.

"Traitor or Good Citizen?"  That was the title of an article published Monday at analitica.com by Gustavo Coronel -- a Chávez opponent and former top Venezuelan executive in the South American country's state oil company.  Coronel's conclusion regarding Navarrete's "complex ethical situation": he's a good citizen, because knowing the truth about Chávez is vital to Venezuela's future political health.

Interestingly, Navarrete described himself as a former Chávez supporter, the only "ideological" member of a Venezuelan team of physicians who started treating Chávez in 2002.  Months ago, however, Chávez dismissed his circle of Venezuelan physicians, having grown increasingly suspicious of everybody around him, Navarette said.  "In Venezuela, President Chávez does not trust anyone, only Cubans," he added.  Navarrete, for his part, said he's finished with militant leftist politics.

In revealing information he'd obtained from Chávez's family members, Navarrete may not have been violating patient-physician confidentiality, Coronel noted.  That surely wasn't the case, on the other hand, in respect to intriguing details Navarrete revealed about Chávez's precarious mental health in early 2002 -- a period of seething political turmoil in Venezuela that was taking an emotional toll on Chávez.

Chávez at the time was "very distressed," Navarrete said, and "under intense pressure and physical exhaustion."  Accordingly, a team of psychiatrist began treating him.

Chávez had reason to be anxious, for his grip on power was becoming increasingly tenuous.  At the time, tens of thousands of anti-Chávez protesters -- on the eve of a March coup against him -- marched regularly in the streets, demonstrating against Chávez's autocratic style and leftist agenda.

Yet it wasn't political turmoil alone that was provoking stress-related problems in Chávez.  It was much more serious: Chávez is a "manic-depressive," Navarrete said.  He explained that Chávez's "unstable mental states turn from euphoria to sadness -- states in which the personality becomes dissociated and has episodes of loosing contact with reality.  It is a very common disease in today's world, described as bipolar disorder.  President Chávez oscillates between these poles, more prone to euphoria, to hyperactivity and mania."

Over the years, Chávez has been described as a narcissist by many, an observation reflecting his desire to be the center of attention.  When he was in good health, he regularly gave rambling speeches on the radio and TV that went on for three or more hours.  But the diagnosis of bipolar disorder gives physiological underpinnings to Chávez's high-energy and rambling monologues and governance.

Regarding Chávez's personal habits, Navarrete said Chávez pays a great deal of attention to his personal appearance, keeping himself "very, very clean," and this includes careful "nail care for his hands and feet."  He noted: "He thought he was not going to get sick -- ever."

As for health-related vices, Navarrete said Chávez "drinks too much coffee, a lot, consuming countless cups of coffee a day[.]"  He also smokes "under stress or pleasure, in private, never in public."

He added: "He works late into the night every day, is a night owl, and makes his ministers work at the same rhythm. He rises at six-thirty or seven o'clock, sleeping an average of three or four hours a day, no more than that, and sleeps very little. He's a strong man, although he's now deformed by the effects of chemotherapy.

A recent article in El Nuevo Herald (sister publication of The Miami Herald) described Chávez as being in grave condition when he was recently rushed to a military hospital.  But Navarrete said Chávez underwent kidney dialysis treatment due to complications associated with his chemotherapy and its negative effect on his kidneys.  The kidneys cleanse the body of toxins.

Navarrete's remarks about Chávez's prognosis echo those of Roger F. Noriega, assistant secretary of state under George W. Bush and a former ambassador to the Organization of the American States.  In a column last July in The Miami Herald, he wrote: "Doctors treating Venezuelan leader Hugo Chávez for cancer told him weeks ago that he has only a 50 percent chance of living another 18 months, according to sources close to his medical team in Cuba."

It was a little over two and a half months ago that Chávez, during a national television address, told stunned Venezuelans that he'd undergone two surgeries in Cuba to remove a pelvic abscess and cancerous tumor.  Speculation has been rife since then about what a post-Chávez Venezuela will look like.  Last month, early elections for next year were called for October as opposed to December.

To date, however, Chávez has no credible successor.  But he does have his fanatic supporters, Chavistas, along with plenty of help from Cuba.  Large numbers of Cuban intelligence agents now operate in Venezuela in support of  Chávez's regime.

Venezuela has provided Cuba with economic largess and regular shipments of oil; accordingly, Cuba can be counted on to do all it can to make sure Venezuela remains an ideological and economic alley.

Unfortunately, Chávez has so completely polarized his country that it will be difficult for Venezuelans to repair the damage he has done.  He has taken three bad ideas from Venezuela's past -- statism, authoritarianism, and populism -- and taken them to epic levels.  Anti-Americanism has become more prevalent than ever.  And large swaths of Venezuela's economy have been nationalized.

The opposition will have much work to do to find a candidate to appeal to Venezuela's poor majority; and even if an opposition candidate prevails, a new government will face an epic task to undo Chávez's damage -- soaring levels of corruption, crime, and dysfunctional governance.  Venezuela's state oil company, critical to government revenues, is a shadow of itself thanks to Chávez's mismanagement.

Even without Chávez (or a Chávez clone), Venezuela will take years to recover from the damage Chávez has done with his leftist and anti-American agenda.

David Paulin, an American Thinker contributor, was a Caracas-based journalist during the years that Chávez rose to power.