Warning: mysqli_free_result() expects parameter 1 to be mysqli_result, bool given in /var/www/html/americanthinker/admin/common/functions/func.general.php on line 126
 Freedom Confronts Tyranny: A Visit to the Demilitarized Zone - American Thinker
|

Freedom Confronts Tyranny: A Visit to the Demilitarized Zone

Nowhere on earth does the contrast between freedom and tyranny, and their corollary prosperity and poverty, reveal itself more vividly than on the Korean Peninsula.  South Korea has boomed, producing an ultramodern high tech society whose corporate giants vie for leadership in global industry after industry, and whose popular culture is consumed all over East Asia.  In the North, under the hereditary Stalinist Kim dynasty, a million or more citizens died in a famine, and widespread malnutrition has made the younger generation inches shorter than their Southern neighbors, on average, and the people have no access to foreign media or the internet. (See also A Holodomor for the New Millennium.)

Last weekend I stepped onto North Korean territory, if only for a minute, and within the confines Demilitarized Zone, in the famous conference building straddling the border, where North and South Koreans can talk directly. It was a 45 minute bus ride from the center of Seoul.

I was spending a week in South Korea, and viewing the Demilitarized Zone was definitely on the to-do list.  It turned out to be pretty easy, and a big business exists catering to the free world's desire to get a glimpse of a truce line in a war that, on paper, still exists.

I knew that Seoul and Korea had completed a lot of infrastructure investment in the past decade or so, but the scale, sophistication, and even glossiness of the transportation system made a strong impression. So did the skyscraper and car-filled cities, obviously part of the first world (with a flair), in the place of the third world city of the 70s I found on my first visit. Everything worked, and a lot of things you encounter in public are as nice or nicer, as sophisticated or even more advanced than, our stuff.   In just 4 decades, South Korea has leaped from poor to rich, powered by Confucian respect for education, a fierce desire to surpass Japan and lead the world, and that economically invaluable combination of  energy and discipline in their national character.

After the Korean War, South Korea was physically devastated, its people on the edge of survival. Traveling the length of the peninsula in the early 70s, I saw few trees, the result, I was told, of the wartime destruction and the postwar need for fuel.  Now, the countryside hills (Korea is 70% mountainous) are full of trees, the flatlands full of farms, factories, a few houses and massive apartment block clusters. Koreans seem to love living in high-rise apartment developments that eerily suggest Cabrini Green or Pruitt-Igoe (only much taller -- 40 story towers were not too unusual, even outside the major cities).

My tourist visit to the DMZ began in the center of Seoul, at the Lotte Hotel, a top end international  business hotel that is part of a massive business group. Multiple agencies sell seats on tours, but they all work through a central clearing house, all located in offices on the 6th floor of the hotel.  Visitors have to go there to pick up tickets, and have passports inspected twice, by the booking agency and the clearinghouse organization.  From there, one awaits the scheduled departure of the bus in a "departure lounge" housed on the hotel's second floor, with passageway leading to a parking deck where one's bus awaits the designated boarding time.

Our bus was moderately full, with 40 passengers, many of them Americans, but Germans, Filipinos, and others were in evidence. The bus drove to a nearby highway entrance, and out of Seoul northward toward the DMZ. For 30 miles, on an 8 and 10 lane freeway, we drove through Seoul and its 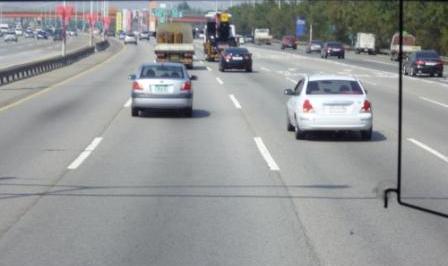 suburbs, home to 22 million people. Although plots of land were being farmed here and there in the suburbs, one never really got out of sight of suburban housing developments (most of them skyscrapers), towns with a mixture of buildings, and factories and commercial complexes.

Along the Han River, which connects with a river flowing from the North, barbed wire and guard posts appeared just north of Seoul, the posts closer together the further north one went. North Korean agents have been caught infiltrating by river for years, some of them even using submarines. This is an active defense line.

After a stop for lunch, we went to the spot on the DMZ furthest north, where South Koreans have built a place for families to leave offerings to their relatives in the North (there are 8 million in South Korea with relatives there), that also features a site where you can stand next to the fence at the edge of the DMZ. 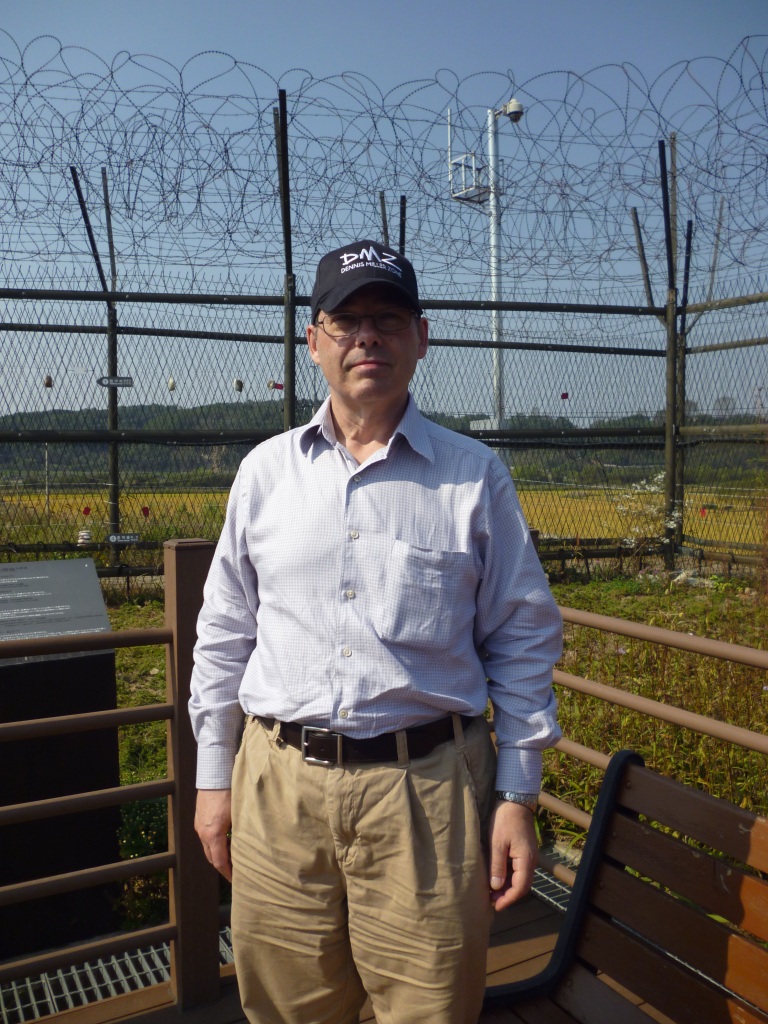 Our bus's departure from this point was closely timed. We were told to show up no later than a certain hour, because our group would lose its place in  the queue at Camp Bonifas, the entrance to the Joint Security Area, well inside the DMZ. 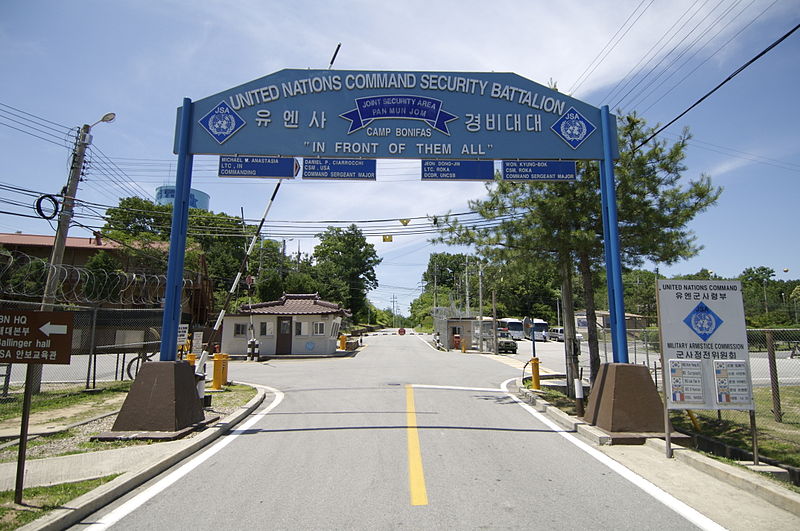 Entering the DMZ itself, we went through a military checkpoint and were sternly warned that no photography was allowed anywhere, without specific permission. When we arrived at Camp Bonifas, we left our tour bus, and boarded a similar highway quality luxury bus, run by the authorities and driven by a South Korean soldier, and overseen by a South Korean soldier who inspected us, and kept guard, armed with a semi-automatic pistol. Our passports were checked, but so was our garb. No ripped jeans, no flip flops. The North Koreans photograph visitors, and use pictures of people in shabby clothing to propagandize their own people about how the South is in decline.

At Camp Bonifas, our group was joined by a busload of Japanese visitors, and our two busses formed a convoy through the rest of the DMZ tour. 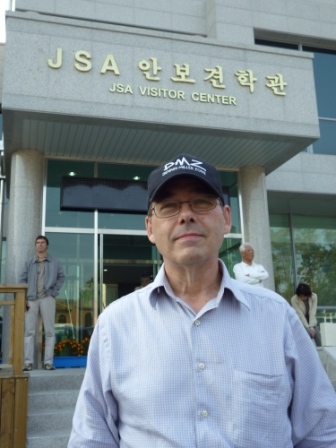 The next stop was the JSA Visitors Center, where we attended a "briefing" as it was called, a lecture given while slides illustrating the history of the DMZ were shown, including the several violent incidents caused by the North Koreans over the years.  The riders of the two busses sat at opposite ends of a large lecture theater, holding perhaps 300 people, each group lectured by its own tour guide in its own language, sticking to the script on the slides, though the Japanese group got a little more information than we did (I speak Japanese).  We were allowed to take a picture of the facade of the JSA building, but that was it.

Then, on to the actual Panmunjon negotiations village, where we were only allowed to photograph the huts and North Korean building on the other side. The UN building on the South Korean side was, like the JSA Visitors Center, very spacious, built of fine materials including marble, and off limits to us except the viewing area from which this picture was taken. 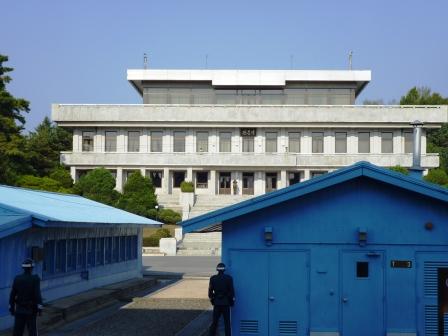 The South Korean soldiers with their backs to us are halfway sheltered by the building, so they can observe the North, but immediately take cover if shot at.  I had to remove my DMZ cap here. In reality, 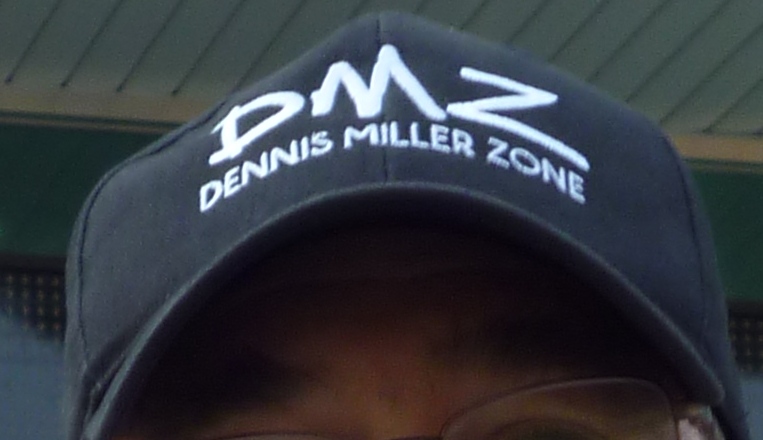 the DMZ in  question is the Dennis Miller Zone, the fan organization for Dennis's talk show, where I appear on a fairly regular basis.  Details like this didn't matter. It might be regarded as provocative, and we wouldn't want the North Koreans to storm us with axes, just because of my hat.

After looking at the guy on the other side watching us through binoculars, we got to go into the 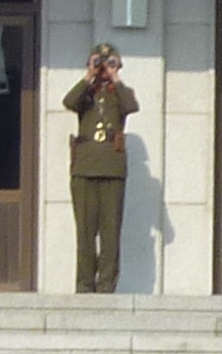 building in the center, run by the South Korean side, where the tables used for talks are housed. There were Korean soldiers inside, standing at rigid attention with their fists clenched, the entire time we were inside.

The border is indicated outside by this stone line. 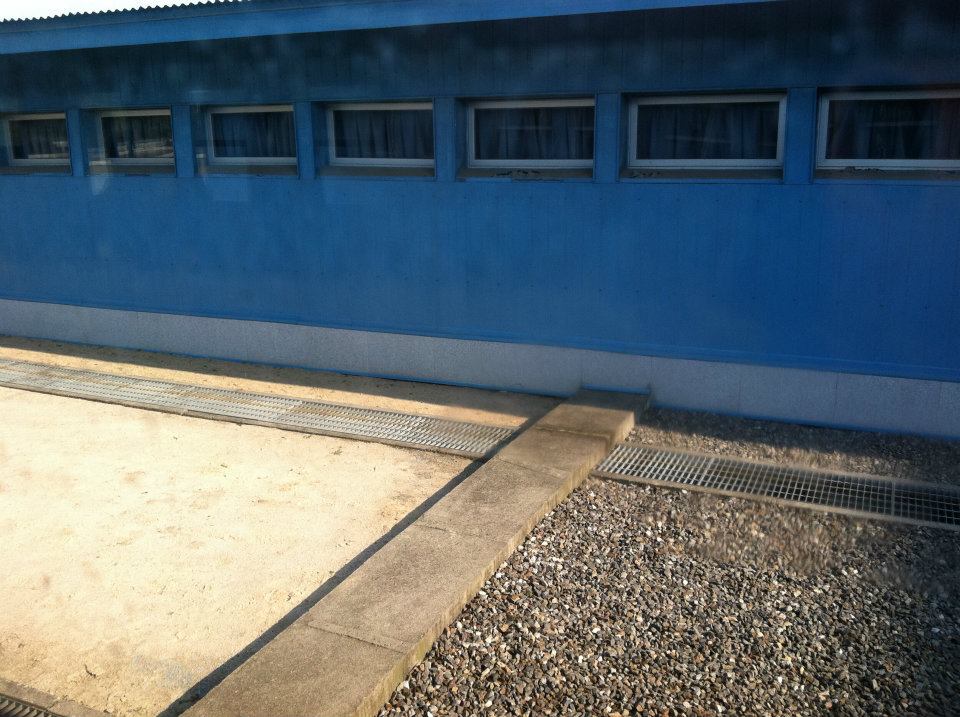 Inside, it runs down the middle of the conference table. 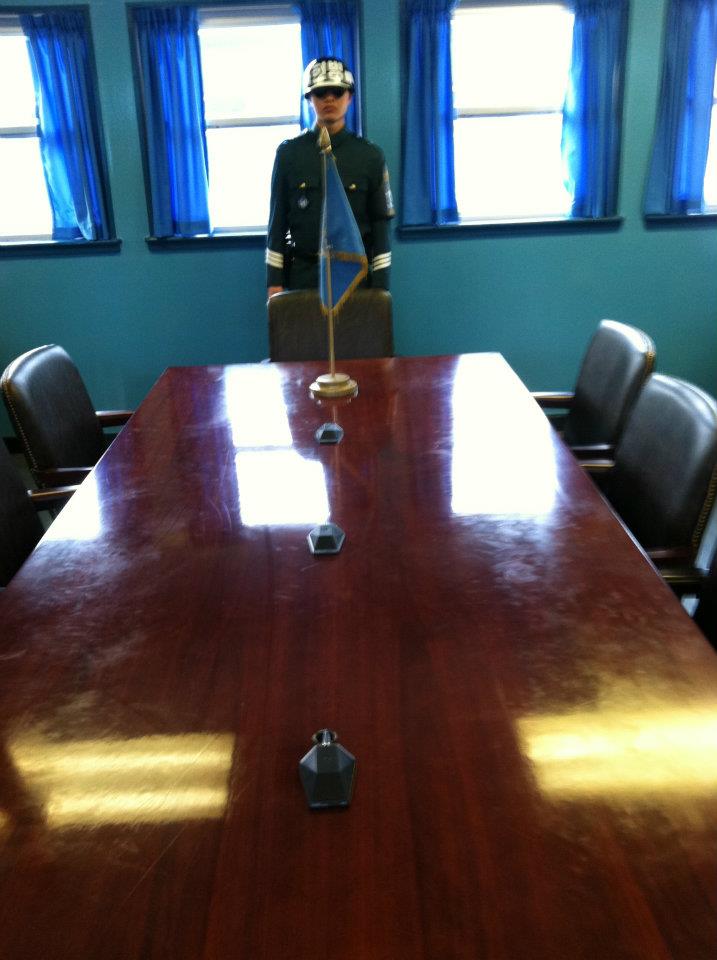 We were permitted to walk a couple of feet into North Korean territory, which is probably as far as I will get into that country, until it is replaced by a less horrific regime. 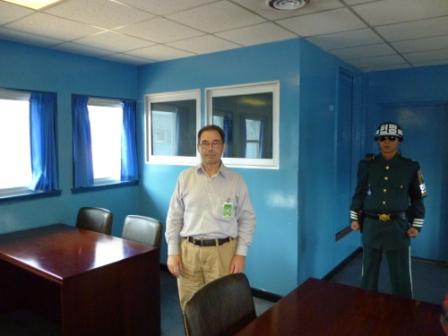 Then it was back to the JSA Visitor Center, where we were allowed to visit a souvenir store! The logo merchandise was fairly tame (tee shirts, glasses and coffee mugs, and the like). Prices were reasonable. Amazing bit of commercialism in this grim setting.

The entire time, I was wearing a UN badge, an item of dress it had never occurred to me I would ever sport. But rules are rules. All in all, the DMZ is probably the best operation in the UN. They do a fine job of handling visitors in an environment that has some level of danger.

I would recommend the DMZ tour to readers who make it to Seoul. The price was roughly $75 at current exchange rates, with lunch thrown in.  South Korea is an amazing country on its own, well worth a visit for its history, scenery, achievements, culture (including terrific food), and most of all its energetic, accomplished people. But more on that another time.