Warning: mysqli_free_result() expects parameter 1 to be mysqli_result, bool given in /var/www/html/americanthinker/admin/common/functions/func.general.php on line 126
 Cain-Romney 2012? - American Thinker
|

The GOP has a problem: the political pros, aka the elite, aka the establishment, think Mitt Romney has the qualities to make a great candidate and a great president.  But the conservative base, aka the Tea Party, aka the grassroots, doesn't like Romney and yearns for another Reagan, a leader who understands the Big Truths ("we win; they lose") that often escape the pointy-headed experts, and someone able to connect with the public that, at its heart, is conservative when it comes to values and beliefs.

If only there were some way to give both sides what they want!  This is why we hear the suggestion floated of offering Herman Cain the vice presidential nod, as a means of uniting the party.

If only as a thought experiment, consider inverting the proposed ticket.  Put aside, for the moment, the many questions swirling about Cain: whether or not Cain has any staying power, whether he will wash out because he hasn't thought through enough issues and is unprepared, or whether he will find his footing and start fleshing out an organization and a platform.  Time will tell.  For the moment, ponder the possibility.

I wish it were not true, but a huge portion of the public votes for president on an emotional basis.  They do not closely parse policy questions, but instead look for someone they feel comfortable about as leader of the country -- and that means welcoming the president into their living rooms.  They want to like the person they are voting for.

Herman Cain is likable -- far more so than Romney, as even most of Mitt's supporters would have to admit if pressed.  Romney's image problem goes beyond his manner at the podium and the insincerity some impute to his views.  Son of a governor and Fortune 500 company president, he became a pure capitalist and made an immodest fortune at it, often laying off large numbers of people in the process.  He applied sophisticated but relatively bloodless financial, legal, and management paradigms to the companies Bain Capital acquired.  He is currently planning to tear down a multimillion-dollar beachfront house in La Jolla and build in its place a 12-million-dollar behemoth -- this at a time when millions face the loss of their homes, and almost every homeowner is taking a bath in 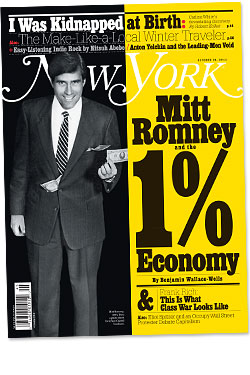 terms of property values.  Worst of all, Romney once posed with his Bain colleagues in a tableau that could have been inspired by Scrooge McDuck.  This youthful pictorial indiscretion is already being mined to demonize Romney, and there is much more coming.  With a billion dollars or so to spend, the Obama campaign thinks Romney can be made as radioactive as Newt ever got.

By contrast, Cain, the son of a blue-collar, three-job man, worked his way up from the bottom on merit, before the era of affirmative action, studying math.  When he took over as boss of 400 Burger King restaurants, he studied hamburger-making and worked the grill in addition to giving a lot of orders based on abstract knowledge.  If anyone knows of Mitt Romney manning the cash register at Staples when Bain acquired it, please let know.  In an era of populist ferment on the left and right, Cain's origins have far more appeal.

Then there's the vision thing, as GHW Bush put it.  Herman Cain has got it.  He can see, and will be able to sell to America, the need for real federal government restructuring.  He is not in denial about the seriousness of the fiscal crisis facing us.  The majority of Americans have woken up to the fact that the system is seriously off the rails.  A majority is persuadable that the growth of government, in all its fiscal and regulatory complexity, is wasting tax dollars, unbalancing the economy, over-regulating business, and throttling American competitiveness.  And these Americans can accept Cain's call for radical tax simplification.

Romney, by contrast, has a reputation as a flip-flopper.  He doesn't seem to share the vision of downsizing the federal government, perhaps by eliminating entire departments.  His vision does include taking action to fight global warming, though.  He follows the "scientific consensus" and therefore necessarily buys into the need for carbon taxes and other regulation if he proposes to do anything about the hypothetical problem he accepts as real.  If there is any real vision beyond getting Mitt Romney elected president, I haven't seen it.

Herman Cain could be the perfect man to convince the American public of the need for downsizing the federal government.  His outsider status gives him the detachment necessary to perform the surgery.  What Cain lacks, of course, is tempering by years of experience in government.  This is where Mitt Romney comes in.  Romney successfully made the transition from business to government when he became governor of Massachusetts and worked with a Democrat legislature to accomplish something big: RomneyCare.  There is no question that Mitt Romney is fully informed on the workings of the democratic process; on the wily ways of government bureaucracy; and on how to get things done in a complex environment involving business, government, special interests, and a legislature with its own mind.

This record betrays an ability to get big things done, all right, but also someone needing wise guidance when it comes to knowing which big things to do.  Fortunately, the vice presidency, as it has been evolving, is just the place for someone able to help advance his boss's agenda.  Romney's level of administrative competence makes him the ideal adjutant to a visionary leader.  Romney has the makings of a great vice president, a number-two, a chief operating officer for the president.  In campaigns, a vice president usually functions on the attack for the ticket.  As the master of facts and figures, unflappable and aggressive, Mitt Romney fits the bill in a way that Herman Cain does not.

Many of the downsides to Herman Cain, such as his failure to master the details of foreign policy and lack of insider familiarity with the governmental process, can be addressed by the advice of some capable staff.  The American people never expected Ronald Reagan to know everything; they were comfortable with him setting the broad parameters of policy and picking the right staff because they liked and trusted him to do the right things, and because he explained things so directly and so well.  Cain has this potential, and having a guy as smart, hardworking, and capable as Mitt Romney working for him would offer some comfort to those doubting Cain's preparation for the job.

Then there is the unpleasant subject of presidential succession, something that comes up in any campaign.  Cain is, after all, a cancer survivor.  Romney's demonstrated competence is far more reassuring than having Joe Biden a heartbeat away from the presidency.  Can you imagine Mitt Romney debating Joe?

Or what if Obama dumps Biden and recruits Hillary as a way of giving some desperately needed pizzazz to a campaign that looks stale compared to hope and change in 2008?  Romney cedes nothing in the way of likability to Hillary Clinton, and he has the verbal skills to outmatch her, especially after years of polishing his craft.

Finally, consider the symbolism.  Barack Obama chose a buffoon as his vice president, someone who would never be in danger of overshadowing the boss.  Not a lot of courage and leadership on display there.  In contrast, choosing Romney as his vice presidential running mate would show Cain as unafraid to use a smart-as-a-whip rich guy as his number two.  The rich kid working for the kid from the other side of the tracks, Harvard working for Morehouse.  A blueblood member of the best-and-the-brightest club working for the guy who worked his way up from nothing.

Would the two men be able to work together?  Cain actually endorsed Romney in 2008 and, according to Katrina Trinko of National Review, "mentioned Romney first when talking about which fellow candidate he would most likely pick as vice president if he were the nominee."  But would Romney agree to be second on the ticket?  He is, after all, used to being the boss, and is already 64 years old.  He has invested vast amounts of time and money in becoming president, and such a presumed humiliation might be unacceptable.

Cain would have to be explicit about the unprecedented role Vice President Romney would play in a Cain administration, and could conceivably refer to him as the first chief operating officer in the campaign to drive home the point that his inexperience will be tempered.  The possibility of redefining the role of the vice presidency might appeal to Romney.  It gets him into the history books, and gives him a huge leg up to succeed Cain, should the ticket win.  And of course it puts him a heartbeat away from the presidency.  If Cain manages to serially outpoll Romney as the caucuses and primaries roll out, Romney could decide that  he would rather be vice president, understood by the president and the public to be the chief operating officer of the United States, than as former governor and unsuccessful candidate for the Republican nomination, twice.

There are downsides to this ticket, of course.  Would Cain be up to debating Obama?  At this point, we can't say.  Certainly Cain would need to stop signing books and focus more on briefing books.  He should be reaching out to people of the caliber of John Bolton on foreign affairs, and broaden his 9-9-9 rhetoric to include openness to other radical tax simplification approaches.  He has sincerity, frankness, and unpretentiousness on his side, qualities that Obama pretended to have, but which can no longer be said to be part of his popular image after nearly 3 years in office.  The truth will out.

There are a lot of contingencies, and many of them are dependent on Herman Cain's ability.  But if he proves himself, and if a unified party with an enthusiastic base is necessary to win elections, the Republicans might even make their ticket Cain-Romney in 2012.