Warning: mysqli_free_result() expects parameter 1 to be mysqli_result, bool given in /var/www/html/americanthinker/admin/common/functions/func.general.php on line 126
 Republicans to Obama: The Whole Country Can be Rich - American Thinker
|

Republicans to Obama: The Whole Country Can be Rich

The good news is that America has wealth beyond dreams that can be realized in the next decade, producing a million new jobs.  According to a recent Congressional report, the United States' combined recoverable natural gas, oil and coal endowment is the largest on Earth.  Our resources are larger than Saudi Arabia, China and Canada, combined. Our known resources can meet the country's need for oil and gas for the rest of the century.  That's not including shale oil, the true energy future.  If we used our own oil, we could replace imported oil from the Persian Gulf for the next fifty years. By then cars will probably be running on something else.

Now turn your eyes to where real jobs are being created.

States that have grown jobs in the last decade are states using their energy resources, such as North Dakota, Wyoming, Utah, Texas, and Alaska. Texas has created 40% of the jobs in America since 2009, with half a million jobs directly in the energy sector.  These are good jobs.  A roughneck with a high school diploma can earn $100,000 a year in Wyoming's Jonah Fields.  An entry level job on an oil rig pays $70K.

40% percent of our energy is from petroleum, almost 25% from natural gas and 23% from coal. Nearly half the electricity in this country is from coal.  Oil and gas industry employment increased between 5-11% in 2010, yes that is 2010.  Nine out of eleven of the fastest growing jobs in America were in the oil and gas sector.

To understand the potential of developing our resources further, contemplate this: Brazil expects to add 2 million jobs in the next decade working in their new off-shore oil fields, producing a million barrels a day.   It could be us.  We have almost three times more oil than Brazil according to U.S. government statistics.

The American west is ten years away from producing more oil and natural gas energy on a daily basis than current U.S. imports from Saudi Arabia, Iraq, Kuwait, Venezuela, Colombia, Algeria, Nigeria, and Russia combined.  This development is expected to produce half a million jobs.  Fossil fuel energy will also produce $5 billion in state revenues for schools and infrastructure.  Think states with no income taxes.

The Marcellus natural gas fields in Pennsylvania, West Virginia, New York and Ohio is ten years away from creating 250,000 jobs, $2 billion in state and local taxes, and $20 billion in GDP, according to a Penn State study.  Marcellus alone will provide a quarter of the nation's energy needs, says the U.S. Energy Information Administration.

The Bakken oil field in North Dakota and Montana is estimated by the U.S. Geological Survey to have 25 times more recoverable oil than previously believed.  State geologists expect to be producing a million barrels a day in ten years.  Think 100,000 jobs.  Add together all the country's shale oil, and you double those numbers.

Exxon has discovered new oil in the Gulf of Mexico with the potential for 700 billion barrels of oil.  For comparison, Saudi Arabia has  reserves of 300-800 billion.  The bad news: the Obama administration is still blocking new leases (see below).

Lifting restrictions on oil drilling in Alaska and off our coasts would add more than 530,000 jobs and increase our oil production by 4 million barrels a day.

Doubling down on the good news:  if America were to allow development of our fossil fuel resources, added to those of Canada and Mexico, North America would be "energy secure," no longer dependent on the terror-supporting regimes of the Middle East. 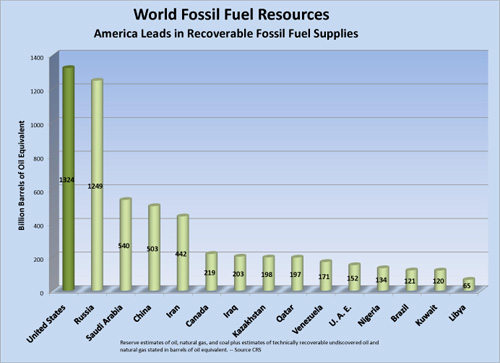 More good news: despite all the hype about the dangers of fracking, the key technology for extracting oil and gas from shale and tar sands, EPA Administrator Lisa Jackson testified before Congress, she knows "no proven cases where fracking has affected water."  Fracking has been in use for sixty years and is used in 9 out of 10 wells nationwide, including 100% of the wells in Pennsylvania since the 1950's.

Yes, fracking requires safety standards, as does all energy development.  A study by the prestigious, National Academy of Sciences found "no evidence that fracking fluids were leaching into wells," despite alarmist New York Times reports.  "Methane can leak into well water totally naturally," the study reported, and can provide dramatic images of people igniting the water from their faucets.  They did find some cases where methane leakages can be traced to fracking, but the Academy study concluded "the methane was probably coming from leaky well pipes, which would mean an easy fix."  Israel has discovered shale oil a mere 30 miles from Jerusalem, in a field as large as all Saudi Arabia's reserves, second only to the United States.  They plan to use fracking which they believe will pose no ecological threat to their precious aquifer.

Now for the bad news.

The bad news is that only the Republicans want to develop fossil fuel energy.

Only one-tenth of 1 percent of the electric power used in the United States each year comes from solar power, yes, that is 1%.  Yet Democrats are blocking fossil fuel development with every tactic they can use, legal and illegal, and shoving billions of dollars into subsidies for green energy.  All this money has been wasted: there has been a net loss of green jobs.

Obama's administration is in contempt of federal court for imposing an "arbitrary and capricious" moratorium on oil leases in the Gulf of Mexico.  This summer Obama did an end run around the court and extended the moratorium, which has wiped out 1 billion dollars in wages, yes that is 1 billion.  Even former President Clinton criticized Obama for the "ridiculous delays in permitting when our economy doesn't need it."

The comparison between two energy rich states, liberal California and conservative Texas says it all.  Texas added 800,000 jobs while California lost 700,000 jobs.  California has blocked oil drilling, subsidized expensive green energy and forces utilities to buy green energy, at the projected cost of losing one million jobs, yes that is one million jobs.  Two months ago, California Gov. Jerry Brown signed legislation requiring the state to obtain one-third of its electricity from renewable energy sources by 2020.  How's it going for them? There's been a cascade of taxpayer funded bankruptcies, and venture money is pulling out of the alternative energy field.

Federal subsidies in this sector cannot erase the realities of the marketplace: you can't sell something expensive and impractical that consumers don't want.  The 'green jobs' mirage pursued by the White House has been a total failure measured by jobs or  cost effective energy production or even quantity of energy.  Producing electricity from solar energy is 300 times more expensive than our current use of coal.  Wind is 40% more expensive, runs only at 20% capacity, requires backup fossil fuel plants, destroys wildlife habitat and massacres birds, and causes human health problems. It can only succeed if utilities are forced by law to purchase it, with the costs being passed to the consumer.

Adding insult to injury, 80% of the money given by Obama to American solar companies was used to buy Chinese products, subsidized under Communism. Ignoring this disaster, on his Midwest bus tour following the debt ceiling crisis, Obama pledged 2.4 billion more taxpayer dollars for green jobs.  His core liberal voting base doesn't understand the economic and human cost in suffering caused by the green assault on our economy.

The poster child of the Obama administration's energy policy was Solyndra, a solar energy company that was given almost half a billion dollars by Obama, who touted it as the jobs future for our country.  Shortly after Obama's summer campaign stop at Solyndra, it went bankrupt, amidst evidence of criminal fraud reaching all the way to the White House.  The major investor in the company happens to be one of Obama's billionaire campaign bundlers.

Obama is not changing course on green jobs, despite the scandals of taxpayer billions going down the bankruptcy hole.  There have been three bankruptcies of companies he recently touted as America's future.  Green jobs were the only private sector jobs Obama aimed for in the first trillion dollar stimulus package, and they continue to be the linchpin of Stimulus II.  So what if no jobs are actually created - Obama believes green poverty is preferable to oil wealth for our country.

Obama used to point to Spain as a model for our future. By dint of promising 25 years of above-market price guarantees, Spain is a world leader in reliance on solar energy - which met a pathetic 2.5% of their energy needs.  Spanish taxpayers spent $788,000 on each solar energy job, and subsidies of $1,400,000 per job for wind power.  The ruinous cost of green energy lead to the loss of 2.2 jobs elsewhere in the economy for every green job created.  Measured by energy production, each "green" megawatt destroyed 5 jobs.  Now that Spain is facing bankruptcy, such subsidies will cease and the whole phoney edifice of alternative energy will collapse.

Germany is also pulling back from their policies forcing utilities to buy expensive, taxpayer subsidized, green energy.  A recent German study concluded it has been a failure on all fronts, in their words, "massive expenditures that show little long-term promise for stimulating the economy, protecting the environment, or increasing energy security."

Which future do we want?  Should Europe or Texas be our model?  The Democrat path: national debt at 100% of GDP (that's Greek territory) by 2013 and ruinous energy costs for all of us.  The Republican path:  millions of high paying jobs, affordable energy, lower taxes and independence from Arab oil.  Democrat or Republican?  Come 2012, you decide.