Why the Left Elites Are Criticizing Obama

I usually find that Eleanor Clift's columns are either predictably boring or infuriatingly ignorant.  Her latest Why No Democrat Will Challenge Obama was actually fairly interesting, although perhaps not in a way the writer intended.  First came the admission that although Obama is in deep political trouble he isn't likely to be challenged.

Anyone contemplating a run against Obama must consider the consequences of not only defeating the president, but the likely repercussions to his or her own career. "If he were white, he would have a progressive challenger," says Bill Schneider of the Democratic group Third Way. Because Obama is this historic figure, challenging him would hamper the prospects of anyone who wants a future in elective Democratic politics. "Blacks would be deeply offended by a challenge, and that's no way to score points in the Democratic Party," says Schneider. African-Americans are the Democrats' most loyal constituency, and while they too are disappointed in what Obama has been able to accomplish, they are not going to abandon him.

This isn't surprising, but one seldom catches a Democrat admitting the prime factor race plays when Democrats calculate their interests.   The narrative of the invincible Obama juggernaut ignored the main reason he became the nominee in 2008 was concerns the super delegates had  over offending black voters. He and Hillary were locked in a dead heat after the caucuses and primaries.  The candidate who won the super delegates -- elected Democrats in each state -- would win the nomination.   In many states the 90% share of the black vote is all that keeps the Democratic Party viable in statewide races.  Indeed Minnesota is not a state known for its large black population but several recent statewide races were won by margins far smaller than the black vote in Minneapolis.  Only a handful of super delegates from areas where the black vote wasn't material opted for Hillary, even though many of them had to know Obama's now manifest shortcomings from personal experience.

As I got deeper in the column it was obvious the headline was a misstatement,   Clift's gist is that it is unlikely that Obama will have a major primary opponent.

"There's a deep frustration without a solution," says [political scientist Sam] Popkin. "What candidate is able to say he will do more, or fix it? All they can say is, I would have been meaner or louder or I would do better saying no to Republicans."

I can think of a couple of former Democrat governors who would certainly say they would have tried to do far less when it came to spending and regulation,  but that message is not wanted from Democrats at the national level anymore.

As Clift goes on to report, those now urging potential candidates to step forward are all from the far left wing of the Democratic Party and here is where it get's interesting.  Their stated goal is not to defeat Obama. It seems to be a desire to revive the euphoria of 2008.

Nobody's going to beat this guy in the Democratic primaries," says Nader. "That's not the goal. The goal is to turn him around and make him face up to his promises of 2008." Ideally, several people would step forward and force Obama to debate on Democratic turf -- the minimum wage, labor rights, shifting the tax burden to Wall Street. "Otherwise he's just responding to the crazy Republicans," says Nader.

Environmentalist Bill McKibben is among those being contacted, though he responded in an e-mail he didn't know anything about it, and may have missed it because he's "deep in the weeds" organizing two weeks of civil disobedience beginning this month outside the White House to resist a proposed oil pipeline from the tar sands of Alberta, Canada, to Texas. "We're billing it not so much as a protest," McKibben wrote, "as to show that there is enormous support for him returning to the Obama of that election [2008]-the one who, among other things, said that with his ascension 'the rise of the oceans would begin to slow and the planet begin to heal.' And this is the perfect issue to find out if that guy's still there, because he gets to make the call on the pipeline all by himself, with no interference from Congress."

A telltale sign: McKibben and other demonstrators will be wearing Obama buttons that say 2008, not 2012, as they try to reclaim the ideals of his candidacy. They hope to remind Obama who he is, or who he said he was, without the club, or the threat, of a formal challenge.

Which promises are we talking about?  Notice that neither McKibben or Nader mention Afghanistan, Iraq  and Guantanamo or the "kinetic military action" in Libya.  War it seems is only objected to by America's peace movement when it is being waged by Republican presidents.  As for who Obama said he was in 2008, where should one begin?  In the ads that one could not escape even on the Food Channel and Nickelodeon in October 2008, the Obama campaign presented him as a moderate who was for fiscal responsibility and more jobs.  His promise of an open, bipartisan and post racial government was what appealed to moderate suburban voters.  While he glossed over his lack of experience, his demeanor promised a first rate temperament.  Obama can't run as a blank slate twice.  In 2011 it is becoming obvious to these swing voters the only thing transparent about this administration are its daily lies and endless evasions of responsibility.  Nor can Obama hide his left wing politics, the radical agenda of his appointments or his petulant and puerile demeanor.  What voters have seen for themselves can't be dismissed as baseless charges from right wing opponents,

A critical mass of voters now understand how they were manipulated.  Obama's 2008 campaign had a split personality. The public image was of a  candidate who ran as moderate and who made pretty sounding but content-free speeches designed to make him palatable to mainstream voters.  It was this part of the campaign that became the focus of media cheerleading,   Them there was the behind the scenes campaign.  It consisted of a cadre of hard left political operatives who played hardball at the caucuses and who accused opponents of both parties of racism if they raised the candidate's lack of accomplishments, experience, or his decades-long series of connections to far left individuals and organizations.  These people understood that Obama might throw them under the bus to win the election, but that was OK because once in office Obama would implement their decades old agenda of statism and cosmic justice.

Three years later this agenda is losing popularity with voters.  Their much vaunted promise of "green jobs" has proven to be a waste of taxpayer greenbacks. Their pet cause of "healing the planet" is now at odds with an America that is starting to think an Employment Protection Agency would be a better use of tax dollars than an Environmental Protection Agency as the long term costs of over regulation are being felt both in the job market and the family budget.  Each week seems to further demolish the idea that anthropogenic global warming had a basis in science.  And of course those wars Senator and candidate Obama opposed are still in process.

As I read the quotes Clift had gathered I was fascinated.  Are these people really that out of touch?  Or is something else happening?  Anyone with political instincts can see that Obama's current political interest dictate distancing himself from someone like McKibben and poking a bit of fun at the rhetorical excesses in 2008.   He isn't likely to do either, so maybe what McKibben and his allies really want is to create a conflict where one doesn't exist.  If Obama won't move to the center an increasingly vocal left yapping art his heels will allow him to appear moderate and in control to low interest voters.

Then I thought about how perhaps the largest of the now vanishing dreams was how Obama's army of young people was to became the vanguard of decades of progressive rule.  A recent Pew poll showed a 10 percentage point increase in the number of white voters under age 30 who identified themselves as Republican since 2008.  The latest Rasmussen poll reports that among identified Democrats the older they are the more they enthusiastic they tend to be about Obama.

From a generational perspective, the president earns from 75% to 84% approva 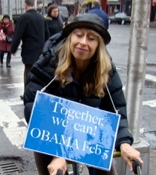 l from all measured age groups. However, there is a notable lack of enthusiasm among younger party members. Just 19% of Democrats under 30 Strongly Approve of the way Obama is handling his job. By way of comparison, that figure is at 45% among 40-somethings and higher among other age groups.

No job and a huge student loan tab to repay tends to sour one's enthusiasm as bit.  Rasmussen goes on to note that:

these younger Democrats are more committed than their elders to voting for a Democrat on the Generic Congressional Ballot. The under-30 crowd prefers a Generic Democrat for Congress over a Generic Republican by a margin of 84% to four percent (4%). In terms of congressional voting, just 56% of conservative Democrats are committed to sticking with the party line, while 20% are ready to vote for a Republican.

Thus it appears that young voters who still identify themselves as Democrat have more problems with Obama as a leader than they have with the Democrat agenda itself.   Much of the recent criticism of Obama from the left comes from people with backgrounds in academia.  They would have a sense of the younger generation's growing disillusionment.

Thus I suspect a major goal of most of this criticism and talk of primary opposition is precisely to keep younger voters from identifying the problem as a failure of progressive policies.  It is better for the Democrats in the long run if all fault is found to be the weakness of Obama's character rather than the unrealistic policies he pursued.   Let Obama fall -- or be pushed -- from grace if that means preserving the prestige of all the king's men -- and not a few horse's asses-in academic, foundation and media circles. who safeguard the progressive agenda.  After all, the sentiment that you can't make an omelet without breaking a few eggs has been attributed to self described champions of the down trodden from Robespierre to Lenin and Stalin.

The left always eats their own when they fail.