Warning: mysqli_free_result() expects parameter 1 to be mysqli_result, bool given in /var/www/html/americanthinker/admin/common/functions/func.general.php on line 126
 The Taboo on Mentioning Black Mob Violence - American Thinker
|

If you point out a wave of racial mob violence, you are "race-baiting," according to several liberal commentators.  Perhaps these liberals are the ones Attorney General Holder referred to when he called ours a "nation of cowards."

The wave of racist violence committed by black flash mobs is different from any other form of racism today.  The neglected social problem of racial mob violence is unique in its organization, the high numbers of people involved, the intensity of the violence, and the stark racial impact of that violence.  The violence is also unique in that it has been purposefully obscured by the mainstream media, with the editor of the Chicago Tribune, among others, saying that his paper will not report on the race of the attackers.

The hateful murders of Matthew Shephard, who was gay, and James Byrd, Jr., who was black, were memorialized with national legislation.  When similar crimes are committed by blacks against whites, they are greeted with ignominious silence.  Just ask your friends how many of them are familiar with the murder of Channon Christian and Christopher Newsome, or David Graham.  How many are familiar with Hoang Nguyen, who was killed in a senseless "game" called the knock-out game, in which mostly black attackers attack mostly non-black victims?

Now that some news outlets like the Drudge Report have occasionally taken notice of some of this violence, the left is acting out in response.  Some on the left -- always on the lookout for racism against minorities -- are now upset that people are paying attention to black mob violence.  The hypocrisy is so extreme that some liberals, like Roy Edroso at The Village Voice, are condemning people who point out the mob violence.

Alex Pareene of Slate complains, "Since Obama actually took office, though, Drudge has seriously stepped up his 'scary black people' coverage."  Pareene is naturally too thoughtless to consider that the attacks have largely emerged after Obama took office, with the first serious outbreak occurring in Philadelphia in 2009.  The New York Times must be racist for reporting on that event.  Of course it's "race-baiting" to point out unique problems that have emerged or worsened under this president -- like flash mobs, debt, and entitlements.

Pareene took Drudge to task for reporting on the vicious beating death of Derrion Albert.  "The violent death of a young man is definitely news ... in Chicago, where it happened.  It had very little to do with whether Chicago is a suitable venue for the Olympics."  The Olympic Committee probably thought otherwise.  Mainstream outlets like CBS news questioned whether the murder hurt Chicago's Olympics bid.  A reasonable Olympic Committee would want to find a less violent place to hold the Olympics, just as many reasonable people have fled cities for the same reason.

We also get a version of the "white people do it too" argument from Pareene: "Drudge does not collect and attempt to tie together disparate, unrelated stories of crimes committed by drunk, rowdy white kids.  And for the record, drunk, rowdy white kids commit a lot of crimes, in a lot of places!"  Pareene doesn't name a single one.  There is no group of white kids in America today involved in violence of this organization, scope, and intensity.  Pareene is not just wrong; he his pathetically ill-informed.  The stories about racial mob violence are not disparate and unrelated.  The stories are interrelated because they report on a new social problem, which Pareene is too facile and dogmatic to give attention to.  If the race of victims and attackers were switched in these mobs, the violence would be seen as related, and dramatically so.

Pareene goes on: "this world of race riots and constant violent attacks on innocent Caucasians exists only in the imaginations of Matt Drudge and the paranoid suburban and exurban white people he wants to keep terrified."  But Drudge is not generating the terror; black violence is.  Yen Nguyen was terrified as she watched her 72-year-old husband being beaten to death by blacks in the senseless "knock out" game.  Let Pareene find a story where whites did something similar and it was swept beneath the rug.  Shaina Perry was terrified when she was being taunted and beaten in Milwaukee.  Carter Strange was terrified while his skull was fractured in South Carolina, and Dawid Strucinski was terrified while being beaten into a coma in Bayonne.  Anna Taylor, Emily Guendelsberger, and Thomas Fitzgerald were terrified as they were kicked on the ground in separate flash mobs.  The 38 blacks who were arrested for four month's worth of mayhem in Denver, including the murder of Andrew Graham, are the source of terror, not Drudge.

John Cook at the Gawker takes a slightly less myopic approach than Pareene.  He says, "young people in large groups often make poor decisions" and that Drudge "rounded up a slew of run-of-the-mill summer crime stories that happen to involve black people and suggestively weaved them into a nationwide race riot."

First of all, these are not run-of-the-mill crimes.  They typically involve group attacks against defenseless, random victims who have no means to resist and did nothing to provoke their attackers.  These flash mobs often stomp their victims even after they are down, as most of the news reports describe.  These are not rumbles or fisticuffs; these are acts of brutal mob violence -- a new social problem that needs to be addressed.

Cook says it's "race-baiting" to talk about these crimes.  Presumably, it would not be considered race-baiting if the races were reversed.  Speaking out about these stories is not only justified; it is necessary.  There is no racism in America today that causes more harm than these mobs.  But the liberal apologists have their habits of denial.  For instance, Cook closes his piece by noting that the crime rate is at "a 40 year low."   The clear implication of this factoid is that therefore it doesn't make sense to talk about black mob violence.  But the "40 year low" factoid is incredibly misleading.

Here is a visualization of the statistics: 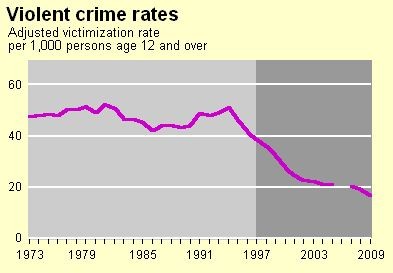 When liberals refer to "a 40-year low," they are placing the comparison point in the 1970s.  The fact of the matter is that most people consider the great crime wave to have begun in the mid-1960s.  So using the 40 year marker, as Cook does, is quite misleading.

As the next graph below shows, using 40 years ago as your baseline produces a dramatically different impression from using 50 years ago.

If you use 50 years as your baseline, you see that our current crime rate is terrible compared with the low crime rate that our nation used to have before the 1960s.  That the rate is declining only means it's less terrible than it was.

The left used to say that people riot and commit crime out of frustration because The Man is keeping them down.  They've given up on that fairy tale and instead demonize conservatives for recognizing a social problem.