Warning: mysqli_free_result() expects parameter 1 to be mysqli_result, bool given in /var/www/html/americanthinker/admin/common/functions/func.general.php on line 126
 The Budget Control Act Of 2011 Violates Constitutional Order - American Thinker
|

In a Constitutional Republic of the sort that we thought we had, the process by which laws are made is at least as important as the laws that are enacted.  Our Constitution prescribes that law-making process in some detail, but those who voted for the "Budget Control Act of 2011" ("BCA 2011") were wholly unconcerned about trampling upon required constitutional processes on the way to the nirvana of "bi-partisan consensus "to avert a supposed crisis.  At least two titles of the bill now being rushed through Congress are unconstitutional.

The Constitution's Article I, Section 8, Clause 2 vests in Congress the power "to borrow Money on the credit of the United States."  As two of America's leading constitutionalists, St. George Tucker and Joseph Story, observed, the power to borrow money is "inseparably connected" with that of "raising a revenue."  Thus, from the founding of the American republic through 1917, Congress -- vested with the power "to lay and collect taxes, duties and imposts," -- kept a tight rein on borrowing, and authorized each individual debt issuance separately.

To provide more flexibility to finance the United States involvement in World War I, Congress established an aggregate limit, or ceiling, on the total amount of bonds that could be issued.  This gave birth to the congressional practice of setting a limit on all federal debt.  While Congress no longer approved each individual debt issuance, it determined the upper limit above which borrowing was not permitted.  Thus, on February 12, 2010, Congress set a debt ceiling of $14.294 trillion, which President Obama signed into law.

However, a different approach was used when BCA 2011 was signed into law on August 2, 2011.  Title III of the Act reads the "Debt Ceiling Disapproval Process."  Under this title Congress has transferred to the President the power to "determine" that the debt ceiling is too low, and that further borrowing is required to meet existing commitments," subject only to congressional "disapproval."  For the first time in American history the power to borrow money on the credit of the United States has been disconnected from the power to raise revenue.  What St. George Tucker and Joseph Story stated were inseparable powers have now by statute been separated.

Under the new process established by this bill, if the President determines, no later than December 31, 2011, that the nation's debt is within $100 billion of the existing debt limit and that further borrowing is required to meet existing commitments, the debt limit automatically increases.  The President need only to certify to Congress that he has made the required determination.  Once the President acts, the Secretary of the Treasury may borrow $900 billion "subject to the enactment of a joint resolution of disapproval enacted" by Congress.

But this is not all. Title III also provides that if Congress fails to disapprove the debt ceiling increase in the amount of $900 billion, the President may again certify to Congress that he has determined that the debt subject to the new ceiling is within $100 billion and that further borrowing is required to meet existing commitments.  So the Secretary of Treasury is authorized to borrow another $1.2 trillion.  Indeed, the Secretary may borrow even more -- up to $1.5 trillion if a proposed balanced budget amendment has been submitted to the states for ratification.  As was true of the first round of ceiling raising and borrowing, the President and Secretary of the Treasury are constrained only by the possibility of a congressional resolution of disapproval which, itself, is subject to veto by the President.

By giving the President the authority to increase the debt ceiling and to determine that borrowing is necessary to meet the nation's commitments, this bill turns the legislative process on its head.  According to Article I, Section 7, before an act can become a law, it must first be passed as a bill by the House of Representatives and the Senate.  Thus, any action taken to authorize the borrowing of money on the credit of the United States - whether such action is a formal bill or a vote or resolution -- must be initiated by Congress and, then, presented to the President for his veto or signature.  This bill creates what it calls a "Debt Ceiling Disapproval Process" whereby the constitutional process is reversed.  Instead of Congress's initiating the decision to borrow money, the President has the initiative.  Congress is relegated to the role of having to disapprove the President's decision to lift the debt ceiling and authorize the Secretary of Treasury to do what the Constitution says only Congress may do -- borrow money on the credit of the United States.

Instead of constitutional order, in which Congress presents a law authorizing the borrowing of money to the President to sign or veto, the President presents to the Congress his determination that more money is to be borrowed, subject to the acquiescence or veto of Congress.

Title IV of the Budget Control Act vests in that joint select committee the power to draft legislation to reduce the deficit by at least $1.5 trillion over the period of fiscal years 2012 to 2021.

Here, members of Congress yield their individual legislative duties and responsibilities to a "Super Congress" selected not by the people -- but by Republican and Democrat leaders.

How many of these Congressmen and Senators campaigned on the platform that they would be elected, get sworn in, and then obediently surrender the power their constituents vested in them to the very same Republican and Democrat leaders who have created the problems they were sent here to solve?

To facilitate passage of the joint committee's legislative proposals, Section 402 contains a number of procedural rules designed to expedite consideration of the joint committee recommendations.  Generally, the rules require action by both houses no later than December 23, 2011, on a joint committee recommendation that must be submitted no later than December 9, 2011.  Additionally, the section prohibits amendments to the proposed legislation and prescribes severe limits on the time for debate.  In short the procedural rules dictate unity of action of a majority of each house to accelerate adoption of the deficit reductions recommended by the joint committee within a two-week period of time. 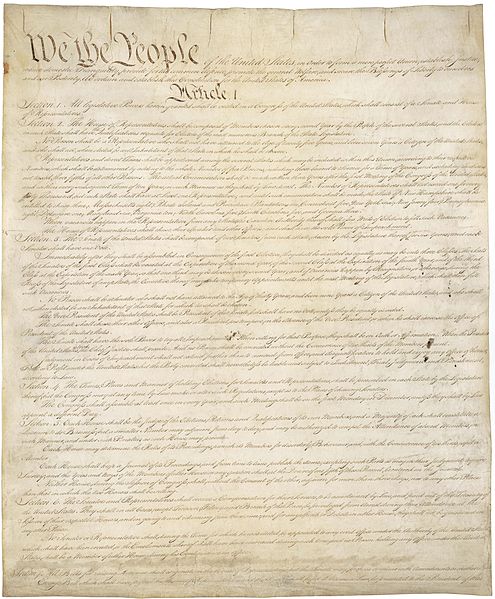 The Constitutional order is quite different.  Article I, Section 1 vests the legislative power in a bicameral Congress composed of a House of Representatives and a Senate.  The members of each body are elected in two very different manners.  Each senator is elected by the vote of the people of an entire state, and each state has the same number of senators regardless of population.  The members of the House are elected by the people in congressional districts divided into districts, each state being guaranteed at least one representative and the others allocated according to population.

The composition of each house then is deliberately designed by the Constitution to represent vastly different majorities.  And for good reason.  As the Supreme Court observed in I.N.S. v. Chadha, 462 U.S. 919, 949 (1983), "by providing that no law could take effect without the prescribed majority of the Members of both Houses, the Framers reemphasized their belief ... that legislation should not be enacted unless it has been carefully and fully considered by the Nation's elected officials."

The Budget Control Act of 2011 departs from that commitment vesting incredible power in the joint committee, virtually guaranteeing that deficit reduction legislation will be "carefully and fully considered," if at all, only by 6 of 100 elected senators and 6 of 435 elected representatives.

These are not matters of constitutional form without meaning -- the process was considered central to the founders.

In the debates on the need for a bicameral legislature, James Wilson warned:  "Is there a danger of a Legislative despotism?  Theory & practice both proclaim it.  If the legislative authority be not restrained, there can be neither liberty nor stability; and it can only be restrained by dividing it within itself, into distinct and independent branches."

Even the last defender of monarchy among the founders, Alexander Hamilton, warned that to "accumulate, in a single body, all the most important prerogatives of sovereignty [would] entail upon our posterity one of the most execrable forms of government that human infatuation ever contrived."

Thus, as the Supreme Court noted in Chadha, James Madison "point[ed] up the need to divide and disperse power in order to protect liberty":  "In republican government, legislative authority necessarily predominates.  The remedy for this inconveniency is to divide the legislature into different branches; and to render them, by different modes of election and different principles of action, as little connected with each other as the nature of their common functions and the common dependence on society will admit."  The Federalist, No. 51 (emphasis added).

The Budget Control Act of 2011 does just the opposite.  Instead of ensuring action by two "distinctive bodies," to be "exercised only after opportunity for full debate in separate settings," the Act truncates the deliberative process by shortening debate, excluding amendments, and commanding uniformity.  See Chadha, 462 U.S. at 951.

Expedition was never the principal object of the legislative process created by the founders.  The object was to preserve limitations on the power of government in order to protect the liberties of the people.  Liberties can be lost when bad precedents are set in the atmosphere of crisis -- and crises can, and often are, manufactured.   Precedents established can be hard to overturn.  Rights lost can be hard to regain.

The 74-page Budget Control Act of 2011 was not written over the weekend.  Yet it was posted on the House Rules Committee website with no fanfare, only hours before it was to be voted upon, breaking the pledge of the House Republicans to provide at least 72-hours advance public notice.

Contrived crisis, appeals to fear, emergency legislation, and suspension of Constitutional order -- these are the indicia of abuse of power, leading to tyranny.

Herb Titus taught constitutional law for 26 years, concluding his academic career as founding Dean of Regent Law School.  Bill Olson served in three positions in the Reagan Administration.  They now practice constitutional law together, defending against government excess, at William J. Olson, P.C.  They can be reached at wjo@mindspring.com or Olsonlaw@twitter.com