There has been no shortage of fawning and sycophantic descriptions of Barack Hussein Obama.  His admirers and supporters on the political left and in the media (although I repeat myself) have showered him with numerous accolades and lavished him with countless superlatives.  According to them, he is "the most," "the best," "most successful," "the greatest," and so on.

He has been called the most intelligent man ever elected president.  Some believe he is literally a genius.  Obama himself "always believes he is the smartest person in any room," according to those who know him.

In spite of these claims of brilliance, close examination of his remarks indicates he is of average intellect at best.  In fact, analysis of his 2011 State of the Union address revealed his remarks were written at 8.1 grade school level, the second lowest of the 70 SOTU addresses delivered since the 1930s.

Underscoring his pedestrian intelligence are his college transcripts.  He would have publicly released them if they were in any way flattering.

Perhaps most illuminating are those moments when he speaks without the use of a teleprompter, which are indeed rare.  Obama uses teleprompters more than any president in history.  He uses a teleprompter for routine introductions, 12-person cabinet meetings, and speaking at an elementary school.  He even had the U.S. Air Force transport an astonishing 12 teleprompters on his trip to the U.K.

It is a disturbing spectacle to watch Obama when he goes off teleprompter.  He can ramble on with a painfully long and convoluted response to a simple question, stumble over his very own comments or mix-up the living and the dead as he did with a pair of Medal of Honor recipients.

Yet, none of these shortfalls matter to Roger Simon of the liberal Capitol Hill newspaper Politico who proclaimed "Obama is the greatest orator of modern times."

Some label him attractive, handsome.  One New York Times columnist wrote that she dreamt of having sex with the president.  MSNBC's Chris Matthews confessed about the creepy man-crush he has on Obama.

Everyone, including his critics, "must admire him" claims a foo-foo magazine article titled "How Can We Not Love Obama?"

Let us be realistic.  Most would agree Brad Pitt, George Clooney and Denzel Washington are handsome.  So are Blair Underwood and Jude Law.  But not Obama.  The tall and lanky Obama with his prominent jug ears can best be described as the post-adolescent Steve Urkel minus the oversized plastic rim glasses.

Caroline Kennedy likened Obama to her father, John Kennedy.  Others have compared him to Superman and God.  Yes, God.  The then-Managing Editor of Newsweek magazine, Evan Thomas, said, "Obama is sort of a god."

On the rational side of humanity is the Internet firm Jib-Jab, which developed animation that satirized the silliness of likening Obama to a superhero.  It is worth watching.

National Public Radio speculated Obama may be the "most athletic president ever." (Should any compliment of Obama surprise anyone coming from one of the nation's most partisan media outlets?)  The most athletic?  Really?  In fact, there is no evidence he posesses anything more than of barely average athleticism.

True, he plays dozens of rounds of golf each year.  Two rounds a weekend are not uncommon.  We hear about it but, America is not allowed to actually watch him play.  A witness to his driving abilities described his golfing skills as similar to that of comedian Tim Conway's character, Dorf.

We are not permitted to see him play a game of basketball.  That, too, is off-limits to the press.  However, we have been treated to him taking a jump shot (well inside the two-point arc) while on a visit to Kuwait where he canceled an opportunity to visit wounded troops.

We are told to merely accept he is great on the court and the links.

New York Times columnist David Brooks thought Obama was presidential timber as early as 2005 because of "his perfectly creased pant."  (Brooks is the faux conservative on the New York Times staff.  He is journalism's equivalent to the Washington Generals basketball team, the perennial losers to the Harlem Globetrotters.)

Who knew that fashion sense was just as important a qualification for the office of the President as it is to determine America's Next Top Model?  Apparently it is for New York Times columnists.

Obama is a fashionista, claim his followers.  He has been lauded as "amongst the best dressed men in the world" for his typical daily wardrobe of a Navy suit with plain white shirt and a solid colored necktie.  If only the previous 43 presidents could have dressed as nicely.

According to the Nobel committee, he is the paragon of passivism, earning him the committee's 2009 Peace Prize.  This was after he tripled U.S. troop strength in Afghanistan and authorized more drone strikes in a year than Bush did in eight years but, before he launched America into an unprecedented third simultaneous war (in Libya).

Notwithstanding the worst job market since the Great Depression, world-record deficits and national debt and a sluggish economy that continues to stall, Obama believes he is the most successful president in half a century.

Michelle Obama has called him her "baby's daddy," a term a bit too ghetto for the liking of some.

Some have claimed he is Kenyan by birth or of Indonesian citizenship.  Others allege he posesses a Social Security number issued to a resident of Connecticut.

All that aside, the most accurate and descriptive term for him is priss.  Yes, Barack Obama is a wuss, a veritable pantywaist.

Let us examine the facts.

He cannot perform one of most basic American pastimes: bowling.  Everyone (aside from those who live in New York, LA and Washington, DC) has bowled at least once in their life.  And virtually any first-time bowler can manage better than the score of 37 (out of 300) that Obama bowled in 2008.  Not a single boy in my son's Cub Scout day of bowling managed a score of less than 70.  No less than an MSNBC host likened Obama's bowling skills to that of a little girl.  At last check, that MSNBC host is still employed.

Ronald Reagan chopped firewood for relaxation, George W. Bush cleared brush and worked on his ranch while on vacation and Bush's father parachuted out of a plane -- both during combat and as an octogenarian to prove he could do it even if the plane was not engulfed in flames.  On the rare occasion, Bill Clinton would eke out a slow and plodding jog.  Even the hapless Jimmy Carter pounded nails on behalf of Habitat for Humanity.

However, no such rugged activity exists for Obama. 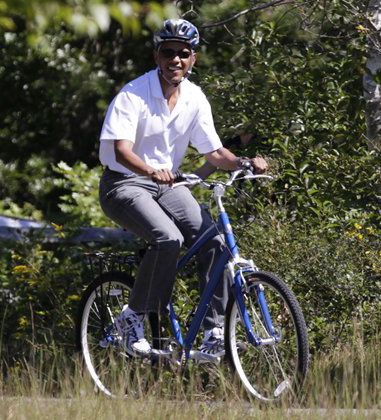 We have photographic evidence he has ridden a bike.  A girl's bike at that. While he was wearing blue jeans.  And they appear to be designer jeans.  Plus, he wears "a helmet that could make Michael Dukakis blush."  The only thing missing (aside from him riding an actual man's bicycle) are the handlebar streamers and woven basket adorned with a plastic daisy.

Contrast this with George Bush on a mountain bike on a 100 km ride through formidable Texas scrubland accompanied by wounded servicemen and women.

Bush looks like a commander-in-chief.  Obama? He definitely looks like the pantywaist-in-chief poised to ring his bicycle bell (ching, ching).

Even the effete and haughty John Kerry perched atop a man's bike looks to be absolutely masculine in contrast to the scrawny Obama.

Speaking of America's pastime, Obama has thrown a first pitch at a ball game.  He  throws like a girl.

He drinks beer in a very effeminate way.  He doesn't grasp a beer glass with his entire hand as most men do.  Instead, he uses his fingertips to hold the glass and he extends his pinky into the air.  He drinks this way every single time.

When addressing the hardships affecting the family budget, most guys would discuss mortgages, paying utility bills or making the car payment.  When discussing the challenges facing America's farmers, images of operating tractors and other farm equipment might come to mind.  Obama thinks differently.  For both families and farmers, he frets over the retail price of arugula.

When choosing among television programs on which to appear he ignored traditional hard news outlets and opted to appear on "The View."  One reviewer of Obama's visit to daytime talk television observed that "the thing that caught the eye was how the president crosses his legs just like a woman when seated."

No doubt, he is more likely to curl up on the sofa to watch a DVD of "Hope Floats," "The Sisterhood of the Traveling Pants," or "The Divine Secrets of the Ya-ya Sisterhood" then he would be to watch an action film or anything starring Clint Eastwood (except maybe "The Bridges of Madison County.")

Make no mistake.  Barack Obama is no alpha male with a commanding physical presence, who is secure in his manliness and supremely confident in himself.

Barack Obama is the beta male.

He's embarrassed about his heritage.  He told us in the book Dreams from My Father that his name Barack is Arabic but, when he spoke at the 2004 Democrat Convention he claimed it was African.

He is extremely secretive about his past and his few life's accomplishments.

He refuses to release his college transcripts or papers.  Or show us his passport.

He is incredibly thin-skinned.

He has a strong dislike for pick-up trucks and SUVs.

He talks tough but has never been known to confront anyone without an entourage of bullies to back him up such as SEIU thugs or the Nancy Pelosi-led House Democrat caucus.  He brings to mind the 13-year Australian boy who was forever picking on another student as long as his middle school gang was nearby.

No one knows for certain which brand of cigarettes Obama smokes.  His wife mentioned during his 2004 Senate campaign that he smoked Marlboros.  There are also reports he smokes less-manly Newport 100s and other menthol cigarettes.

Obama's main muscle in the White House during the first two years was a former ballet dancer.  True dat.

He celebrated raising the national debt limit with his staff by eating at a Capitol Hill Restaurant.  Rather than slathering his cheeseburger with ketchup and yellow mustard, Obama instead applied Dijon.  No word if he also substituted arugula for lettuce.

The British, who have historically taken joy in poking fun at American arrogance, may have exacted revenge against Obama for his having shipped back the bust of Winston Churchill that was given to the U.S. following the September 11th terrorist attacks.  The British police gave Obama the nickname "Chalaque" during his 2011 visit to the United Kingdom.  It is a Punjab word meaning "smart alec."  There is no known Punjab word for "pantywaist."  If there were, no doubt the British would have labeled Obama with it.

Mark Hyman hosts "Behind the Headlines," a commentary program for Sinclair Broadcast Group.