President Obama has suggested in his last 147 television appearances that he inherited the national debt from President Bush, who squandered the Clinton surplus with his "tax cuts for the rich" and his unnecessary wars.

Now someone at whitehouse.gov, apparently not an accountant or an economist, has put together an "infographic" that assigns hard numbers to these vague assertions, explaining in detail how "$12.7 Trillion [was] Added to the Debt Over the Last Decade."  The graphic parts of the infographic are competent, and the White House logo looks spiffy, but the info part is entirely mendacious. 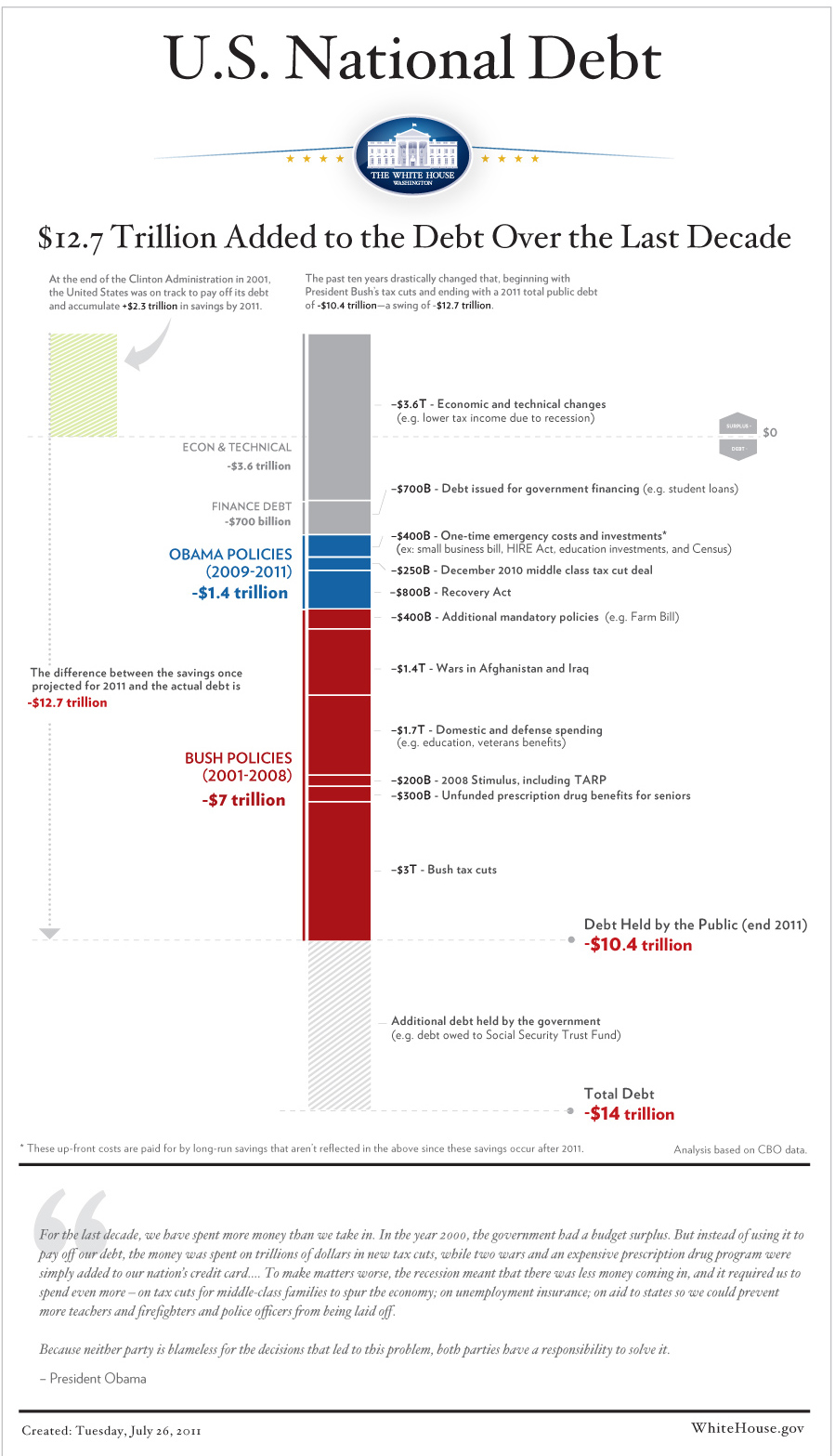 The infographic is a vertical bar graph with 2 segments that stand out: "Bush Policies," highlighted in red ink, are responsible for $7 trillion, while "Obama policies," in blue, added $1.4 trillion to the national debt.  We are therefore led to believe that Bush added five times as much as Obama to the national debt.

The items have obviously been slanted to favor Obama's policies (the "middle class tax cut deal" is no different from the "Bush tax cuts"; Obama has "education investments," "one-time and emergency cost[s]" and "mandatory policies" while Bush was fighting un-mandatory wars, etc.).

But more striking is Obama's childish conception of the national debt.  To state what might be obvious: the federal government takes in revenue and spends it on all its various discretionary activities and mandatory entitlements.  When outlays exceed receipts, we run a deficit, and over time, the deficits accumulate, creating national debt, which today stands at $14.2 trillion and running.

Any government expenditure could potentially add to the national debt, but the idea that you can point to one "policy" and claim that 100% of the cost should be added to our debt is absurd.  It would be like claiming that you gained ten pounds because last month you ate six pounds of chicken and four pounds of rice.  Similarly, it is erroneous to claim that that the national debt increased by $1.4 trillion because Bush spent that amount over five years on Iraq and Afghanistan.  Much, or part, of the cost of war was funded by tax revenue.

Obama's 2010 budget was over 2,000 pages long, with $3.5 trillion of expenditures, against $2.1 trillion in revenue, resulting in a deficit of $1.4 trillion for one year alone.  None of this spending appears in the infographic, even though the combined budgets of Department of Education, HUD, and the Department of Energy total over $100 billion a year, or over $1 trillion in the last decade.  It's as if Obama has redefined mandatory and discretionary spending; any statist program he believes in is mandatory, while programs he disapproves of are discretionary, and only these latter programs can add to the national debt.

As for the Bush tax cuts: Obama has repeatedly referred to tax cuts as government spending, as if cutting taxes deprives the government of its rightful due.  He doesn't see lower taxes as taking less of taxpayers' own money away, but as giving back some of the money the government was owed.  It's an odiously statist way of looking at government.  Tax rates have been adjusted regularly throughout history in an effort to find efficient levels that allow us to pay for necessary services without adding a crushing burden that discourages entrepreneurship.  A tax cut establishes a new level of taxation; it is not an aberration from some original, true rate.

Furthermore, cutting taxes often stimulates economic activity, which brings increased rather than decreased revenue.  And if lower taxes do lead to lower revenues, it is entirely legitimate for taxpayers to choose a smaller government model where they pay less in taxes and receive less in government services.

One might notice that Obama's $12.7-trillion figure doesn't match the OMB's $14 trillion.  The infographic starts with the following assumption:

At the end of the Clinton Administration in 2001, the United States was on track to pay off its debt and accumulate +2.3 trillion in savings by 2011. The past ten years drastically changed that, beginning with President Bush's tax cuts and ending with a 2011 total public debt of -$10.4 trillion-a swing of -$12.7 trillion.

Obama arrived at this $2.3-trillion figure by taking the one-year surplus in 2000 of $236 billion and extrapolating it out over the next ten years.  This fairy tale assumes a static economic model, with no high-tech bubble, no 9/11 attacks, no normal fluctuations of the business cycle, no Iraq Wars, no Hurricane Katrinas.

The numbers outside whitehouse.gov, i.e., in the real world that the Office of Management and Budget attempts to capture, tell a different story.  Here are the federal deficits over the past decade:

It's hard to ignore the huge spending increase under the Pelosi-Reid Congress in their first budget (submitted in 2007 for FY 2008), and the skyrocketing deficits once Obama took the reins.

When Bush signed his first appropriations bill for FY 2002, the nation had accumulated a debt of $6.2 trillion.  In 2009, the last year under a budget signed by Bush, the national debt was $11.9 trillion, or an increase of $5.7 trillion, of which $1.8 trillion, or nearly a third of the increase, occurred in 2009, during Obama's presidency but under a Bush appropriations bill.  If we look at the OMB numbers for Bush's deficits, we see that during from 2002-2009, receipts were $17.2 trillion vs. outlays of $20.8 trillion, a deficit of $3.5 trillion.  The difference between $5.7 and $3.5 trillion lies in accounting gimmicks that separate "Debt Held by Federal Government Accounts" (the so-called Social Security Trust Fund, et. al) and various on-budget and off-budget categories.  Bush's record was not good, but to attribute $7 trillion to Bush is simply false.

It is discouraging but not unexpected to see politicians manipulate financial statistics for political gain.  More frightening is the thought that Obama might actually believe that his infographic is an accurate portrayal of our financial situation.  Does the former community organizer have a clue?